Most Helpful Member
might be gone a few days, the storm from ireland has just slammed into us. doubt the electric will last long, roof is designed for very high winds as we on a exposed hill. slates and part of it already gone.

doors ripped off one the out buildings, and trees (v large) near house coming down.
back when i can
My mind runs at 100 mph, but our house has a 20mph speed limit, so I am always in the poo.
I am officially GOBBY!
My advice is guaranteed upto the amount you have paid for it.

Good luck LG. You and your family stay safe!
"I do not think there is any thrill that can go through the human heart like that felt by the inventor as he sees some creation of the brain unfolding to success... such emotions make a man forget food, sleep, friends, love, everything." --Nikola Tesla

Most Helpful Member
Stay safe.
My circuit designs should be regarded as experimental. Although they work in simulation, their component values may need altering or additional components may be necessary when the circuits are built. Due safety precautions should be taken with any circuit involving mains voltage or electrostatic-sensitive components.
Alec's First Law:-
Every problem has a solution (given the right information and resources).

Most Helpful Member
Hang in there, LG!!

Is it what's left of "Ophelia"?

Forum Supporter
Most Helpful Member
I think he'll be okay... The winds have dropped quite a bit... And the cost of Scotland isn't getting the battering they were promised... Still!! Some damages are still going to happen... Stay safe Logan and don't try any heroics...
I'd give my left arm to be ambidextrous
Nigel's tutorials in asm... http://www.winpicprog.co.uk/
Nigel's tutorials.. re-written in C. http://www.electro-tech-online.com/content/467-nigel-goodwin-s-tutorials-c.html

Most Helpful Member
Thanks, Ian.

Most Helpful Member
Yeah its passed now.
Was a strange one. We had an amber warning (no big deal), but for some reason our little spot got hit hard. No idea if its the direction it came in or what. The news was saying 75-80mph and out anemometer topped out at gusts of 108.

Normally we are really sheltered because of ireland and the Isle of mann where we are, but tonight it came straight up the valley. Lost one out building to tree, two greenhouses and my poly tunnel. Again nothing that should have happened, except this came in the wrong direction. First time we had a storm like that. Tomorrow is being spent putting slates back on the roof.

We are right on the coast, and i guess we got side swiped, i know the town 10 miles down the road is fine. Really odd, We watched them downgrade it while it was getting really bad with trees falling!! So maybe we just got unlucky, First time ever to have it come up the valley like that. The poly tunnel is placed to take the wind side on or head on, the front top window gave in and that was it. No more poly tunnel.

No idea how many trees came down in the wood, but got the tractor for another week so chainsaw out this week .

Thanks for the wishes. We have dropped to gusts of 45-50 which is nothing, and bizarrely its coming from the right direction now lol. Electric has gone, but got the generator for essential stuff
My mind runs at 100 mph, but our house has a 20mph speed limit, so I am always in the poo.
I am officially GOBBY!
My advice is guaranteed upto the amount you have paid for it.

The bit where I am is red @2.06am, but the wind isnt bad at all now. Looking at it I think earlier as it came in it was just hitting us the wrong way. Although we are up on a hill, now its changed direction its fine.
My mind runs at 100 mph, but our house has a 20mph speed limit, so I am always in the poo.
I am officially GOBBY!
My advice is guaranteed upto the amount you have paid for it.

Most Helpful Member
the arrows are now across the bay, winds a bit higher but the bay shelters us. Still showing red for us but its alot calmer 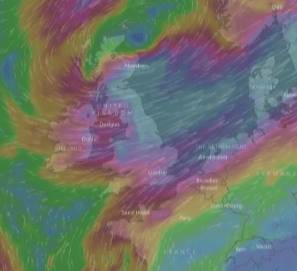 My mind runs at 100 mph, but our house has a 20mph speed limit, so I am always in the poo.
I am officially GOBBY!
My advice is guaranteed upto the amount you have paid for it.

Storm Doris in the UK

Our Friends In The Storm
2