Passthrough charging-simple but impossible to achieve?

Hello all, newbie diy enthusiast at the end of my tether looking for friendly advice!
I have a portable bluetooth speaker which runs off batteries but if the batteries die, will continue to run and charge simultaneously (albeit the charging is slower in that state) off a dc power supply.
I'm building myself a bigger version from scratch using bt amp board and want to power it with an array of 18650 batteries to give me about 19v and 8A peak which can run off a dc supply if the batteries are low and charge the pack somewhat in this mode.
It's such a common feature of commercial portable equipment but for the life of me I can't find a board that will do this.
Any hints or tips will be gratefully appreciated!

Most Helpful Member
You probably can't find a board because it's not a trivial task - charging Li-Ion has to be done under fairly exacting conditions, and it's very difficult to try and maintain that while you're drawing varying amounts of current from the batteries themselves.

Best solution is to run the amplifier and charger parts separately - so when plugged in the mains the amp runs solely from the mains, which also provides separate charging current for the batteries. This keeps the batteries on charge, and doing nothing else.
PIC programmer software, and PIC Tutorials at:
http://www.winpicprog.co.uk

Most Helpful Member
This is how I do it:

The power feed is routed around the charge control and battery using appropriately rated diodes, whilst external power is connected.

As that voltage is higher than the battery voltage, the output diode from the battery is reverse biased and does not conduct.

This diagram includes the charge circuit, which is only about 1A in my case. D1, D2 & D3 are the power routing diodes, you can use an appropriate charge controller for your battery pack.

Note that any pack using series connected lithium cells must use a balance controller, otherwise cells may burst or catch fire. I have a combined balance and protection board as part of the pack I use with this.

The overall charge voltage and current limit must also be precisely controlled.

[An alternative I used for something is a detachable power tool battery with a separate charger - just swap batteries & you can have more than one available]. 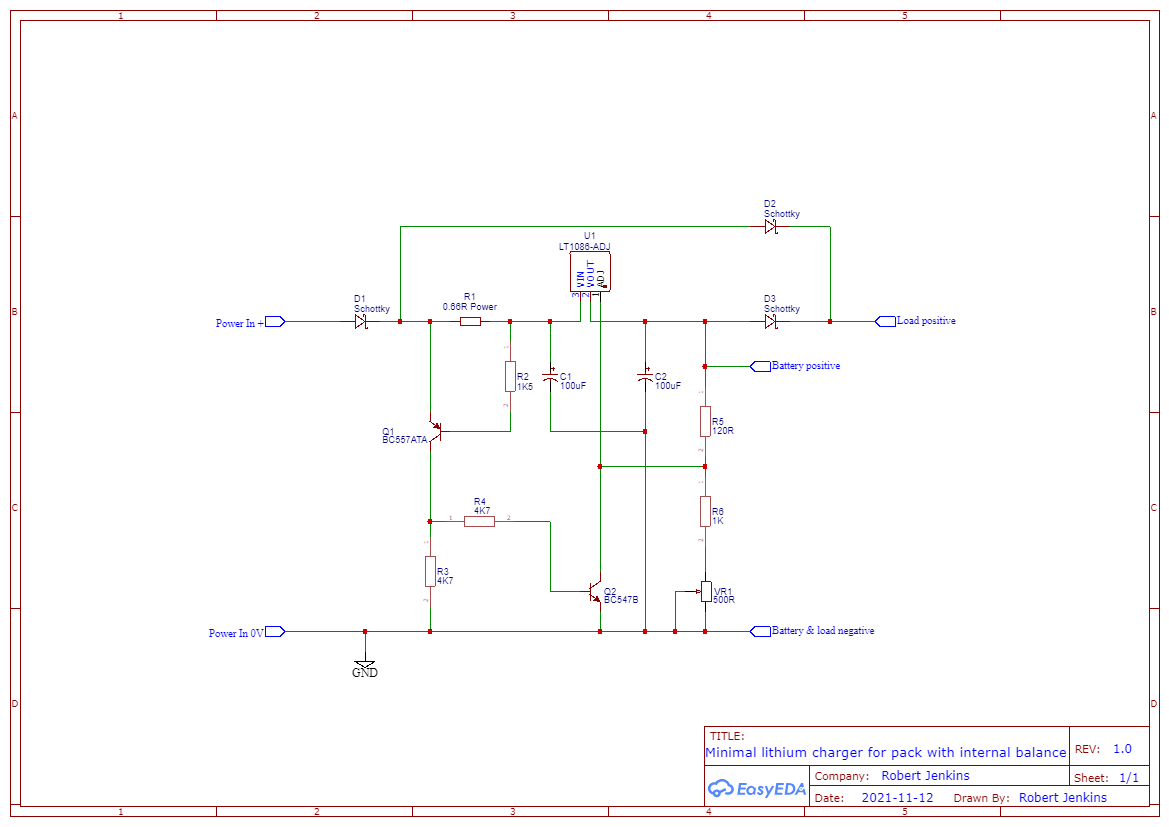 Thanks so much for the suggestions! I will have a play around this weekend and see what I can achieve
P

That's nearly 200W. What is the average current?

Hi Mike, it's a 2x100w amp but they are usually overrated and need the full 24v and the right speakers

Spartacus1917 said:
Hi Mike, it's a 2x100w amp but they are usually overrated and need the full 24v and the right speakers
Click to expand...

Is it a 'real' 2x100w amplifier, as many (most?) give wildly exaggerated imaginary specifications.

Does it have an inverter to increase the supply voltage?, with only 24V and 4 ohm speakers, maximum power is only 16W per channel, or 32W per channel if it's a bridged amplifier.
PIC programmer software, and PIC Tutorials at:
http://www.winpicprog.co.uk

Most Helpful Member
With a 24V supply, a modern bridged class-D switching amplifier (TPA3116) can produce 60W into 4 ohms per channel with 1% distortion or 72 Whats with 10 % distortion. Momentary Peak or Max power is simply double that.
EDIT: Bridging almost double the output voltage swing plus almost doubles the output current swing.
Uncle $crooge

If you want to charge Lithium Ion batteries, do it safely. I did not evaluate rjenkinsgb 's circuit in post #3, and it might be perfectly safe.

Because batteries that are prone to problems (like catching fire or exploding) if not charged correctly I would consider an integrated charge controller from a company I trust, this Power Integrations controller, for example. 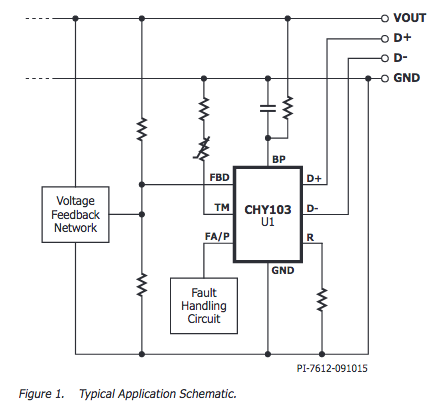 Thank you, I'm only capable of assembling ready made consumer boards but I will look out for one with the CHY103 chip.
The amp is a tpa3116 which does seem to be pushing out lots of power from a mains dc20v 4.5A supply. I'm thinking of trying to hook up already made power bank and boosting the 5v output.

Most Helpful Member
With a 20V supply, a TPA3116 amplifier produces 40W per channel with low distortion into 4 ohms or 22W into 8 ohms.
Uncle $crooge

Spartacus1917 said:
Thank you, I'm only capable of assembling ready made consumer boards but I will look out for one with the CHY103 chip.
Click to expand...

I think you'll struggle finding one, as such modules don't often mention what they use - and I don't recall seeing any higher voltage Li-Ion charger modules for sale?.


Spartacus1917 said:
The amp is a tpa3116 which does seem to be pushing out lots of power from a mains dc20v 4.5A supply. I'm thinking of trying to hook up already made power bank and boosting the 5v output.
Click to expand...

Bear in mind, as volts increase so do amps - so to get 20V at 4.5A would require 5V at 18A, assuming 100% efficiency. And as the Li-Ion batteries are only about 4V, that increases to 22.5A
PIC programmer software, and PIC Tutorials at:
http://www.winpicprog.co.uk

Spartacus1917 said:
only capable of assembling ready made consumer boards
Click to expand...

Unfortunately, I doubt you will find any off-the-shelf "charge while running" combinations.

The charge controller needs to be "inside" the diode bypass circuit to achieve safe charge while operating functionality.

ps. Note that there are a number of supposed "Charge controller" boards or modules with relays, which are completely mis-described by the sellers - just under/over voltage disconnect units listed as charge controllers. These will not properly or safely charge any type of battery.

A couple of 18V (or 20V, same thing by different sellers) power tool batteries and a charger are likely the simplest practical solution, so you can use one battery while the other charges.

You can get connector adapters for several common makes to use them with other equipment.
S

audioguru said:
With a 20V supply, a TPA3116 amplifier produces 40W per channel with low distortion into 4 ohms or 22W into 8 ohms.
Click to expand...

So that's quite a challenge as they only push out 2A at 5v. Back to the drawing board, or separating the power and charge function completely as you suggested
S

rjenkinsgb said:
Unfortunately, I doubt you will find any off-the-shelf "charge while running" combinations
Click to expand...

I was hoping for an internal battery supply but a plug in replacement as you say would be the safest.

It's VERY, VERY simple - potential output power is set by the available supply voltage, and the impedance of the speaker - power is simply voltage squared divided by impedance.

Bear in mind, this is imaginary theory, in practice you can't get 20V output from a 20V supply, so it will always be a fair amount less - nothing is 100% efficient. 'Generally' it's a reasonable idea to knock a couple of volts off the available output voltage, or measure it, if you want accurate results.
PIC programmer software, and PIC Tutorials at:
http://www.winpicprog.co.uk

Most Helpful Member
The sellers in the country on the other side of the world cannot read the English datasheet so they lie about output power.
Amazon sells a Bluetooth plus TPA3116 IC amplifier made by Damgoo. With a 24V supply and 4 ohm speakers it is rated for 100W + 100W. No mention of distortion then half of the 100W per channel is severe distortion.

Really appreciate the posts I've learnt a lot here. Can I ask for views on abandoning lithium and going for a traditional sealed lead acid or gel battery? Similar application to a car or motorbike with an alternator? I probably want to generate about 100w realistically to the amplifier.
S

I'm also assuming that commercially produced bluetooth speakers that operate from mains DC adapter or internal Li batteries have been rigorously engineered and tested for safety reasons
You must log in or register to reply here.

Seemingly Impossible - BUT HEY!!! They seem to do it...