Hello! 'Name's Forrest! Or Ginger, whatever you prefer.

So, I'm pretty new at electronics repair, I've replaced a couple of laptop modules and put new belts on all of my cassette players, but I'm just now, for the first time, trying to soldier a component on a PCB (ironically I broke it trying to replace the belts)

I'm working with an old Tuner/Cassette/Receiver, a Pioneer RX-560
Whilst unsoldering some wires on the Input Assembly (AWZ1058), I accidently broke a three prong transistor labeled "1203 31", marked as "Q409" on the board as well as the schematics in the service manual (thanks eBay!)......a visual inspection of the board shows another 1203 31 located at Q414.
The service manual doesn't show a part number reference for this, oddly enough, it only has these for parts that differ by model, as the manual is for models RX-560, RX-760, AND RX-750s.

Well, I'm trying to find a replacement for this, and I seem to be drawing a blank. Google Images show something similar looking under "2SC1203", defiantly a TO-92 package, although nothing specifically marked "1203 31". I recall finding a data sheet once mentioning "1203 31", but haven't found it since.

I've already asked these questions on Tapeheads.net, I think all of the info they gave was useful, but hopefully I can get closer on a forum dedicated specifically to this kinda stuff. https://www.tapeheads.net/showthread.php?t=61277
If it helps, I can upload hi-res scans of the schematics.

If you post the schematic, then there's a good chance that one will be able to guess what the replacement needs to be.

https://www.bricelam.net/ImageResizer/
You know everybody is ignorant, only on different subjects.
- Will Rogers (1879 - 1935)

Most Helpful Member
Or, get the schematic legible on your screen and use the snippet (Windows) or similar tool to post just that section with the transistor. It would be best if your snippet showed both transistors. 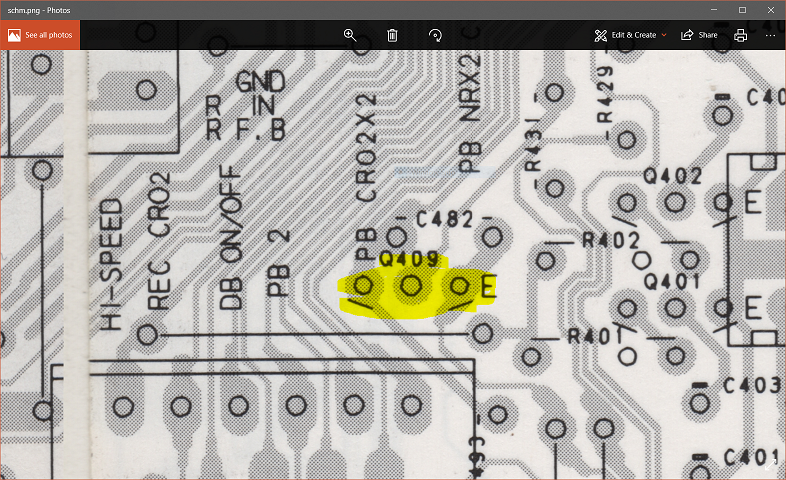 The other one was just a blur, since it didn't quite fit in my scanner right. Maybe I'll try a camera and macro lens when I get home.
Flippin 'eck

Most Helpful Member
Actually, that is not a schematic. It is the printed circuit board (PCB)layout.

Ah, sorry, rookie mistake on my part.....sort of

Just got home and looked in the book....
Surprise, surprise, there is no schematic for the input board...just the x-ray view.

Starting to regret wasting $10 on this stupid book
Flippin 'eck

Most Helpful Member
Does the transistor that was knocked off have any usable amount of leads still attached? You can solder extension wires to almost any stub. That will allow one option to just re-use it. Or you could test and determine whether it is NPN or PNP, then just substitute a general purpose signal transistor of the same type. A lot of multimeters have transistor testers built in.

As a last resort, you could remove the identically labeled transistor and test it -- be sure to note the orientations. Do you have faith in your soldering skills?

I have no faith in my soldiering skills whatsoever...

I tried to reattach the broken lead, but it broke flush to the plastic. I tired using solider, and it kept falling off. I even tried soldiering it, and then covering it in hot-melt glue, but it was still to fragile.
I do have a multimeter, not an expert though...what setting do I need?
Flippin 'eck

Most Helpful Member
There are many descriptions in the Internet about how to test transistors with a multimeter. Some multimeters actually have sockets for doing that -- mine do. There will be a slit with holes labeled for the three pins. I assume yours does not have that, nor do you know with certainty the pinout for the transistor.

NOTE: There are different pinouts for TO-92 packages. You will have to just figure out using those tests what the pinout is. If the PCB layout you have is clear enough and you can determine to what the pins are connected, that will help.

A
help trying to identify transistor

Pioneer SX-205 Stereo Receiver does not power on...