putting a guitar signal through a transducer

hello all, i'm new here, and know very little about electronics. but i have a specific project in mind that i could use some help on...

i'm trying to take the signal from an electric guitar or bass, and drive a piezo element so that it vibrates a object that is not physically in contact with the instrument.

all i could find at radioshack that looked relevant was a 400mW 8-pin audio amplifier, with a layout like this

first question is, what is the -input? a typical 1/8" jack has a +lead and a ground, but no -input. second, if Vs is the voltage supply, and i want to hook up an 8V battery, where does the negative terminal of the battery connect to? same goes for the piezo; if Vout goes to the +lead, what does the -lead connect to?

or is this kind of thing more complicated than this? if anyone has a suggestion for other ways to do this, that would be much appreciated.

It's not very complicated. The LM386 amp chip they sold you is perfect, try google for "LM386 datasheet" in the datasheet you will find a suitable "gain of 20" minimum parts count amp that will be ok to drive your little piezo speaker.

That chip will also make a "proper" guitar amp, search for "LM386 1-watt guitar amp", there have been a lot of commercial designs over the years Including the popular "Pignose" which was a LM386 design.
Roman Black - PICs and electronics. Author of BTc PIC-sound encoder, Shift1-LCD project, the TalkBotBrain talking PIC controller, LiniStepper open-source microstepping motor driver, the Black Regulator 2-transistor SMPS, and probably some other stuff; www.RomanBlack.com
U

thanks, that helps me out a bunch. i tried it out on a circuit board last night and i was able to play my guitar through a small speaker. still haven't tried it with a piezo...

is this suitable? i'm a bit confused about the first 10k resistor (on the Vin), and the arrow point to it from pin3...if someone could explain what that means, i think i'm good to go.

uethanian said:
ti'm a bit confused about the first 10k resistor (on the Vin), and the arrow point to it from pin3...if someone could explain what that means, i think i'm good to go.
Click to expand...

That is the volume control. The "arrow" connects to the wiper which is the center terminal on the control.

EDIT: is there anything i need to do different if i'm using an 9V battery? it seems like the stats may refer to a 6V source...
Click to expand...

The circuit will run fine on 9V. I would put a 47-470uF capacitor in parallel with the 9V supply as well.
Inside every little problem, is a big problem trying to get out.
U

ok, so the squiggly-arrow combo means a 10k potentiometer...so the other squiggly line with a 10 next to it is a 10K resistor then?
K

Forum Supporter
No. That would be a 10Ω resistor. The "default" multiplier for resistors on schematics is ohms unless otherwise stated.
You are correct about the 10KΩ potentiometer. Remember to get an audio taper or LOG potentiometer for that. A linear one will work but the adjustment will appear to be crammed down at one end, volume wise.
Inside every little problem, is a big problem trying to get out.
U

the piezo is giving me trouble. the small one the sell looks like this taken apart:

the two connections at the top of the chip are for +signal and ground, and the three lower connections attach to the three connections on the disk...the ones the used to sell, and which i've used before as acoustic pickups, had no chip, and had only a +signal and ground connection. these, when touched to a 9V, emit a single high pitched noise...performed the same function when hooked up to the circuit. so how do i use this thing?

Most Helpful Member
What EXACTLY are you trying to do, your original post is pretty vague - I'm presuming you are aware how tiny the output from a piezo is?, and that it's essentially only at a single resonant frequency.
PIC programmer software, and PIC Tutorials at:
http://www.winpicprog.co.uk

That particular disc is going to be BARELY audible, if you put it in a small enclosure it will help but the audio quality is going to be really crap. The direct sound from the strings themselves will likley sound better.
"Because I be what I be. I would tell you what you want to know if I
could mum, but I be a cat and no cat anywhere ever gave anyone a
straight answer, har har."

Those values will be fine.

which i've used before as acoustic pickups, had no chip, and had only a +signal and ground connection. these, when touched to a 9V, emit a single high pitched noise...performed the same function when hooked up to the circuit. so how do i use this thing?
Click to expand...

A mentioned by Nigel and Sceadwian, using a piezo as a speaker for a guitar amp is unusual to say the least. But to answer your question on how to use the thing:
Disconnect the little driver "chip" PCB from the piezo element and solder a couple of wires to the element as marked by the arrows and put it back in it's housing without the "chip" PCB: 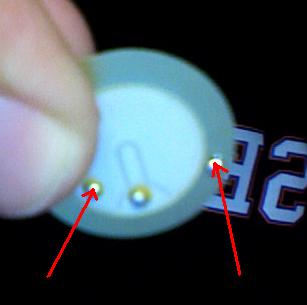 Then you should be able to use it as you did the previous ones.

Last edited: Jun 4, 2009
Inside every little problem, is a big problem trying to get out.
U

sorry for being unclear, its a bit hard to explain...

i'm essentially trying to make on of these

it takes the guitars signal and converts it into physical vibration without audible sound. i thought i could use a piezo because of the way they vibrate, but i don't think its going to produce a strong enough vibration to induce strings to vibrate sympathetically. if anyone could give me info on how the model-c sustainiac works (minus the preamp, just the general idea) that would help.

the other option is an electromagnetic sustainer Stealth Pro Overview. the wiring doesn't look terribly complicated, but thats not information that they'd just give away. i'm a little doubtful of electromagnetic sustainers for this, because on guitars they sustain strings that have already been set in motion; i don't know if they could set strings in oscillation from rest from sympathetic resonance; and the signal would not be in the same octave as the sympathetic strings.

Most Helpful Member
Certainly a piezo would be worse than useless, the website is talking about 4.5 ounce magnets - presumably they are using considerable power to do it?, possibly by vibrating the neck?.
PIC programmer software, and PIC Tutorials at:
http://www.winpicprog.co.uk
U

yes the model C is basically taking the output signal of the guitar and converting it into physical vibration, i'm assuming through some kind of cone-less loudspeaker (a magnet, a very heavy voice coil and a spider). but what i'd be doing, rather than attaching it to the guitar, is attaching it to, say, a zither or harp. if tuned correctly, the strings on the zither/harp should be induced to vibrate sympathetically with the notes played on the guitar. the zither/harp strings can then be amplified and played through a secondary speaker.

OR the sympathetic strings can be induced to vibrate by an electromagnetic sustainer, which is basically a pickup run in reverse (although apparently you can't use a regular pickup, it will burn out). this probably would work but it's a much more artificial sound (like the E-bow, if anyone's familiar with that).

now if i had a spare $279 to spend, i'd probably go ahead and buy the model C; but, i don't. i'm wondering if i can duplicate this myself, for cheaper.

Most Helpful Member
A piezo transducer makes a high pitched sound. It will not produce vibrations at gutar frequencies.
Uncle $crooge

transducer / buzzer as a guitar pickup
2

B
running a motor through a small signal taken from led?