Objective is light the LED within a 12v momentary switch so that last position of a 240v ball valve can be determined.
So the ball valve is 3 wire, two live for open and close and neutral. These wire via a twin relay board controlled by 12v. One relay is used to open and the other to close. The controllers timer turns 12v power to the relay off after 20 seconds, which is enough time for the valve movement. What I would like to happen is when the momentary switch is pressed it’s LED stays on indefinite (indicating last button pressed). Then when the button is pressed to run the other relay to close the valve its button lights up and the other switches off. This then indicates the last button pressed and theoretically the valve position. Can anyone advise the simplest way to wire this? Presume would need to take 12v when button 1 is pressed and retain that until button 2 is pressed And visa versa. The time to stay on could be months, so short term memory (like a capacitor to hold charge) i assume would not work.

I have discounted a system of sensors next to the valve body to read real position in that such would corrode with time and not be so reliable. The switching off of relay power after the movement is desirable disconnect when not in use as a matter of safety.

Presume I need a two input circuit with memory to retain the last input, which then will light up the correct LED. So what would be appropriate choices in this application please?

Thank you
Sort by date Sort by votes

Most Helpful Member
Last button pressed is no issue, and is trivial to do (particularly using a micro-controller, which could also easily do all the timing functions as well).

However, I would suggest that's a VERY poor (and mostly useless) solution.

There's a standard control system for valves, allowing lot's of options - as you can imagine, mostly to do with reliability.
PIC programmer software, and PIC Tutorials at:
http://www.winpicprog.co.uk
Upvote 0 Downvote

Most Helpful Member
There are two types of valves and electronic latches Set/Reset and Toggle.
Yours appears to be a SET/RESET AC motor ball valve. 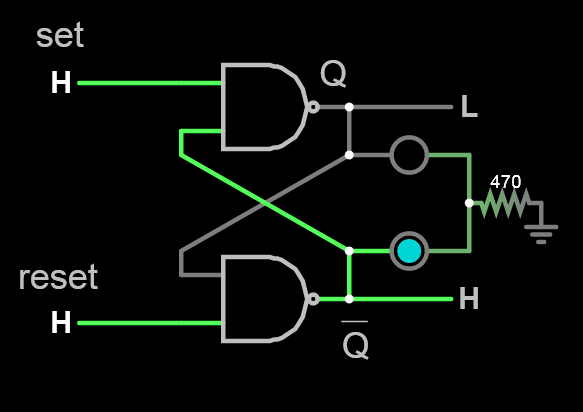 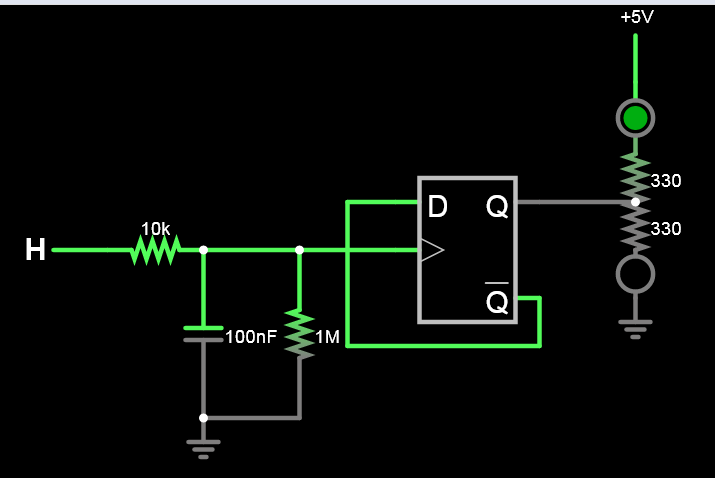 or use the customer logic level switch. The resistors and cap are for filtering and protection.


Most logic is <=5V but old CMOS low current logic (CD4xxx ) works at 12V.
If you had a bright LED , one needs to specify the voltage, current to choose the driver if needed.

The input H/L switches on simulation are user interactive.