Hooking up LED lights turn on like dome lights

Electronics newbie here so I got some questions for you pros. I finished a project of replacing my headliner in my 2000 Cherokee XJ with a tapestry of a galaxy. Something different but looks real amazing! Even did the sun visors to match! After I got the headliner back in, I had this great idea to put some lights in the headliner to look like stars. What I'm looking to do is when I open the door, the lights (or stars) come on just like the dome lights. So my question is, how can I make this happen?

I bought a smaller strain so I could use it as a guinea pig. I just tried to hook them up to the back dome light. Shoving the wires into the slots of the connector and nothing. I tried just touching the wires from the lights to the metal were the bulb goes and it would light up for a tiny second but go off. I feel like I might have burned out the LEDs. I'm still not sure which wire I have to hook it up to make it work. The lights used a battery pack, using 3 AA batteries so it's only using 4.5 volts.

Is that too little for them to work off the dome light?

Here's a pic of the wires from the fairy lights spec
Is anything true?
D

Thanks for the response Spec! So when putting the resistor in series with the LED string, I should solder the resistor to the end of the two wires from the lights, then try wiring it up again or just one wire?


spec said:
You have probably blown the LED string though
Click to expand...

I'm not upset about blowing the LEDs haha. The string was only $8 so I could use it as a guinea pig to get this idea working.
S

Deski12 said:
Thanks for the response Spec! So when putting the resistor in series with the LED string, I should solder the resistor to the end of the two wires from the lights, then try wiring it up again or just one wire?


I'm not upset about blowing the LEDs haha. The string was only $8 so I could use it as a guinea pig to get this idea working.
Click to expand...

You just don,t care do you.

The resistor goes in series with the LED string as shown in the schematic below. It does not matter which end of the LED string that the resistor goes. The idea is that you define the current flowing through the LEDs. You should never put a voltage directly across a LED or you stand a chance of blowing it. Some LED strings have resistors or other controlling electronics already built into them.

When your light system is functional we will expect to see some pictures. 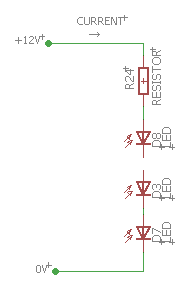 Is anything true?
K

Most Helpful Member
There could be a resistor in the string somewhere, or in the battery power pack. LED's typically have a maximum forward current and a maximum voltage drop (Vd). You can buy 12 V LED indicators and they already have the resistor.

It might be useful if you can find that resistor.

The LED Vd is color dependent. Usual values around 2.1 V for a red LED. That number could be measured with a voltmeter across the lighted LED.

There are some high efficiency LEDS that might require 2 mA. A usual value is 10 mA and normally operating at 20 mA with a max of 50 mA. All of these numbers can change.

In order to get the intensities to be about the same, the Vf of the LED would normally be matched.

So, the resistor is sized from R= (Vs-(n*Vd))/Current
and you pick one of the nominal values.


Vs = supply voltage
n = number of LEDS
Vd = is the typical drop across the LED (sometime max drop is used)
Sometimes you have to add additional drops (e.g. when transistors are involved)
Current is the operating point. 20 mA is 20e-3 amps.

You don''t parallel LEDS. You would usually parallel each resistor/LED combination.

The resistor power can be calculated for any number of formulas P > (I^2)*R
P of the resistor needs to be greater than the calculated value with some safety margin. 1/8. 1/4, 1/2 1, 2 and 5 W are common wattages.
W

Those little battery lights are wired in parallel, anathema though that may be.
(I guess they come in lots of a million or so from the same production facility and are similar enough in characteristics that that will work for a while.)
One data point: a string of these used as a night-light had several different light levels from day one, but all are still lit after a year.
The little circuit to which the batteries attach is often an MCU that controls a program of "off/flashing/six-hours-on-then-eighteen-off"
A workable hack is to connect a USB wall-wart in place of the batteries, with maybe a series 1N4xxx diode for luck.
In a vehicle, you could use one of those cigar-lighter charge adaptor. In fact, the slight brightness variations might make for a more 'galaxy-like' presentation.

As for making the lights come on/go off slowly: that's going to be work
D

Thanks for the reply guys. You guys are definitely a lot of help for a newbie like me! So I bought two 5ft lights (to use as guinea pigs) and the one final 20ft lights that I'll install in my Jeep and 360k and 390k resistors. I tried to hook one of the 5ft light packs up yesterday but with no luck. I cut the wires from the board, striped and wrapped them together, soldered one 390K resistor to them and tried to touch the end of the resistor to the metal where the dome light bulb sits and no light. I'm getting a bit frustrated but still working towards getting this projector to work!

After looking at the board, I noticed that the wires were hooked up marked with L+ and L- and the battery connections were mark V+ and V-. I didn't notice that before, so I'm guessing that L mean "Lights" and V means "Voltages"? I've provided pics of both the 5ft and 20ft lights boards if that will help. After noticing that, I separated the wires, soldered one 390K resistor on both wires, tired to touch the metal again at both ends of the bulb and still nothing. Could it mean the lights won't light up while touching the metal? Does it have to be directly on a hot wire?

After a little digging, I was able to find two PDF files of wiring diagrams for 2000 Jeep Cherokee, or at least something close to that year. But I'm still not familiar on how to read the diagrams properly. If it'll help, I can post pics of the pages that show the dome lighting wiring.


Wade Hassler said:
The little circuit to which the batteries attach is often an MCU that controls a program of "off/flashing/six-hours-on-then-eighteen-off"
A workable hack is to connect a USB wall-wart in place of the batteries, with maybe a series 1N4xxx diode for luck.
In a vehicle, you could use one of those cigar-lighter charge adaptor. In fact, the slight brightness variations might make for a more 'galaxy-like' presentation.

As for making the lights come on/go off slowly: that's going to be work
Click to expand...

Thanks for replying Wade. For what I'm trying to do, I'd rather not hook up the lights to a cigar-lighter charge adaptor. I want to have the lights come on when the doors open, just the like the dome light. Maybe instead of trying to hook up the lights to the dome lights, I try hooking them up to the Door Jamb Switch wires? I thought of the idea of maybe instead of trying to hook the LED lights directly, maybe hook it up with the circuit board still attached? Get some wire and extend the + and - from where the batteries are on the circuit board?

I apologize for all the questions too guys X( I haven't worked electronics besides guitar wiring. You can use the circuit board that came with the lights: in fact, it'll make it easier to control.
But you must reduce the car's 12 volts to the batteries' 5-ish volts... look here
K

Most Helpful Member
I was TRYING to see the number so the 8 pin DIP to see if I coud find it,but I'm unsure of the numbers. I bought recently a 12/24V light which is really a 6-30 V lamp. Verified to be true.