Hello, I have a very annoying occasionally flickering Mute button illumination. It will do a while and then stop for a while. I called McIntosh and they are not very helpful other than sending it to them which will cost at least $100 to mail to them and then a bunch for them to repair. I just got back another component back from repair and it cost like $400 to repair and all that happen was the internal battery went dead and the memory got erased so they had to reinstall the operating system. My question is 2 part. Can the LED be replaced on the board and what are the chances that it is just a bad LED?
R

Here is a pic of the board/LED

Most Helpful Member
Is the LED flickering when it's supposed to be on all the time?

If so, it's possible that it's just a bad LED
http://twitter.com/mtrak_uk
R

Yes, it is on when the unit is on. It is supposed be continuously illuminated to let you know that switch/button is for the mute button. If you press the mute button it has it's own light to show that the unit is muted. I asked McIntosh service if I could just send them the board and save on shipping the preamp as it weights about 45 pounds but they said no as it may not be the LED alone. I asked for the price of the board & it is $500.
D

It is a white LED
K

Most Helpful Member
Model? it's possible the service manual is online. Particularly on hifiengine. Not knowing anything, I'd suspect a loose connection and it could be the LED.
R

It is a c1100, I could not find it there. It is a fairly new model so maybe the only source is the manufacturer. I am not familiar with soldering so I can probably get a new LED bulb from McIntosh and take it somewhere to have the LED replaced locally. I could try myself if I could find some good info on-line on how to do this correctly (i.e. removing old LED and soldering new one on). Any thoughts or recommendation on this?
K

Most Helpful Member
Hifiengine has the SM for the C, P and T versions. https://www.hifiengine.com/manual_library/mcintosh/c1000.shtml I looked at the C version and no Mute LED So, what version (suffix) do you have?

What I would try first, is to push on the led gently when it's off and/or examine the LED to pad connection. LED's generally lose intensity over time.
K

Most Helpful Member
it looks like a double-sided plated through hole board and it might be tough without having the right equipment. It's likely the solder does not contain lead and therefore it melts at a higher temperature and the LED leads have a large thermal mass. A lot of times in the wave soldering process, large components don't solder correctly.`

Re-heating the joint and adding some solder is not likely to be damaging, but replacement for someone with zero experince, I'd say no. A replacement generic LED might not have the same color spectrum or brightness.

When you know a component is damaged, you usually destroy the component and remove the leads one at a time. Desoldering a single sided board is not that bad. Double-sided is harder. Techniques used include adding an alloy that lowers the melting point of the solder, solder wick and vacuum assist. Generally, you suck the solder out, add more solder and then suck that out. The soldering iron is temperature controlled and it is easy to delaminate the traces.

A plated-through hole and a large lead mass make it more difficult.

LED's have polarity. Those LEDs probably have a flat near one lead. New LED's will also have a lead that is longer than the other one.
the leads could be square in a round hole.

Try pushing on the LED in various directions when it flickers and see if it stops. That a novice can likely fix.
R

OK already sounds like more than I want to tackle. Guess I will get a price on the LED and a price on the complete board and if it too much I will just live with the annoying flashing light. To have someone look at I have to ship it (the unit ways 45 pounds) and pay a check out cost of $200. I was told the board was like $500 so I might consider that. With shipping, insurance and the minimum check out fee it will be close to that or more. It looks like the board is connected with some computer like ribbon cords so a novice like me should be able to do that. Any suggestion or things I need to know if I change out the entire board?
K

Most Helpful Member
Just figure out if wiggling the LED fixes it. A pic of the reverse side of the board can help too.

You didn't give me the suffix of the amp for me or anybody to look at how the LED is driven from the schematic.

Taking the board out and sending just the board to an ETO member to solder isn't out of the question. You just don;t want to send things to another country. I've done measurements for a member here for a thread that was active for almost a year.

I think YOU can fix if wiggling fixes it with a little coaxing.
Replacing. I think the right part is important. You want the LEDS to be the same brightness and spectrum for asthetics.
R

Sorry I should have told you before that I already pushed and pulled on the LED as much as I could w/o damaging it. It is so sporadic that I thought it actually did something and after a while it started back at it.

Sorry but I do not know what you are referring to when you say suffix. Can you explain a little further please.

I see if I can get a pic of the back of that board.

Just an idea if I applied heat to the soldering point on the board and heated it up a little do u think if there is bad connection or solder the heat may cause the solder to make good connection?
R

Most Helpful Member
On Hifi engine, I looked at all three SM's. I could not find the mute LED in any of them.

The first one had MUTE on the silk screen, but no LED for mute. The second 2 manuals, I could not find the other two LEDs.
R

Here is a pic of the back of the board. McIntosh 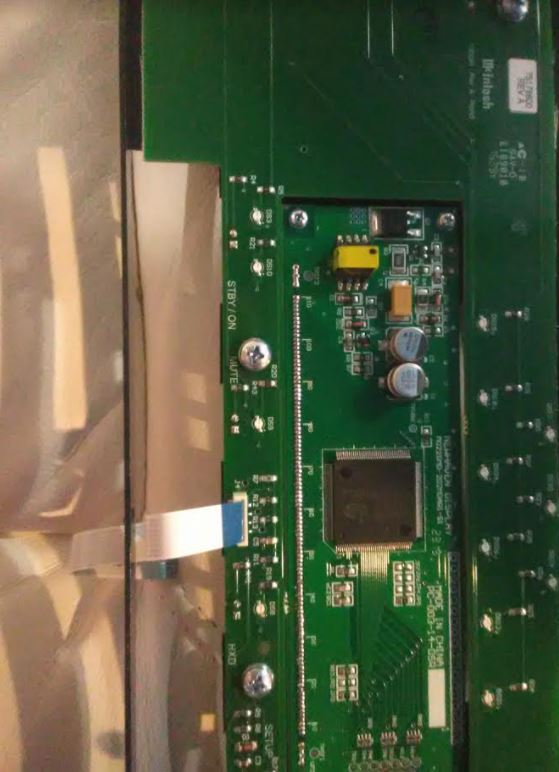 told me I can get a copy of the service manual from parts so I sent them an email. It also seems that once the unit gets up to full operating temperature is seems to flicker a lots less and at times will stop completely.
R

Also, as u can see this pic is actually 2 boards, one with the LED and control knobs and another with the LED screen readout and microprocessor.
R

They are separated by a ribbon connector
R

Here is the response I received from McIntosh's parts department :
The PCB would have to be built by production and would take at least 4 to 6 weeks for completion. The cost is $231.35 for the complete PCB. If you need just the LED, part #05820700, it is available and is $5.00, but we have a $10.00 minimum order so you would have to order at least 2. The service manual is only in PDF and could be emailed to you.
What are your thoughts?
K

Most Helpful Member
The top LED pin looks bad. There "LOOKS" like a separation between the lead and the solder. Freeze spray is used as a diagnostic tool. See https://www.chemtronics.com/ultimate-guide-to-diagnostic-freeze-spray

In two basic ways:
1) The spay can cause an intermittant to become solid. Like you said, it warms up and mute doesn't work. If freezing the joint causes the light to work, then there is a good chance you found it.
2) watching the spray evaporate exposes cracks. They take longer to dissipate.

The freeze spray usually comes with a targeting straw like some spray cans of WD-40 have.

You could do those tests. I'd still like to see the SM.

I worked on two Macintosh valve amps. A friend lent them to someone and they wanted them louder, so the fed the output of one to the input to another. I also worked on an amp that was borrowed from a relative of the owner and was placed in service at a disco. No shop. 5 were asked. I could see why. Components puddled on the PCB. I took it.

I live East Coat US and I have more than a full plate, but re-soldering the joint seems easy enough. I sent something to someone and never got it back and I wasn't happy. There is always the chance I could die in the time frame. You at least have an out. You can purchase what got lost. Postage and a small token amount for my effort via PayPal. I don't have any freeze spray right now.

I had a piece of unobtainium. I sent him something (large real blue print) I wasn't interested in and made a copy first. I had some large blueprints which I might be the only one in the world that has them all. I was trying to figure out how to digitize the drawings.
I used a CAD outfit and they put the drawings on their scanner when it was available for $10.00 a drawing and $5.00 to print it. They had the drawings for >2 weeks. They scanned them in TIFF and PDF.

They tried a program that could help convert drawings to CAD formats, but it didn't work. The entire set cost be about $150.00 and they did some of them. At the time, I did not realize I had pieces of two different designs. It's still not sorted out.

I helped a now friend in .au create a product with the unobtainium info I had. I did get the free product and the schematics in the end. We have an NDA that I don't share without permission and likewise with my drawings which are now scanned. Some were very large blueprints. In the end, we learned that two varients of the product exist. I have an early model. Externally they are the same. It's possible the serial numbers provide a transition.

Mine uses a high quality PCB and looks expensive. Mine has a different IR receiver board, Electrically, they appear to be the same..
We know there are 120 versions and 120/240 switchable versions and even 100V versions.

I also helped him find a design fault in another product he made for home. The chip he used, one set of inputs were CMOS and the other TTL for similar functions on the chip he selected.

I signed an NDA for a commercial product which helped me: It told me that the power brick was unregulated and polarity didn;t matter.
I had to use a regulated power brick for what I wanted to do. I wanted a way to detect the phone off the hook and not talking for 15 min and light a LED and to blink a LED when ringing. I settled for immediate off hook and ringing.
Last edited: Dec 29, 2020