Most Helpful Member
Simulation is relatively easy. Implementing those results in real life is not easy.

What do you have so far? Do you have code that can drive the stepper motor and read position sensor? You can't expect to translate your simulation to real life with a single mouse click. You really have to work your way through all the small steps towards the solution. Simulation, testing in real life.. then comparing the results.. adjust your control algorithm.. then compare your simulation against real life tests etc. etc.

Matlab and simulink is a powerful tool, but you can't expect to create some simulation and then have a working real life system just by pushing a button.

Simulation is a cheap way to determine if a system is doable.. nothing more. It does not really solve your real life problems.

To really simulate your control algorithm, you already need to have a good understanding of the real life system you are simulating. You have to have a good model of your already working system. You have to understand the difference between a high performance PC doing simulations and an 8-bit arduino trying to do it for real. You could simulate a moon landing with matlab, but it does not mean you are going to the Moon in the near future. You can spend one weekend simulating.. but it takes ten years and millions of dollars to actually do it.
Last edited: May 13, 2017
"I cannot prove it because it is too basic. Every mathematician knows that the simplest things are the hardest to prove."
S

firstly , i want to implement my project . i already have Test-rig and make my mathematical model to get the plant transfer function to build my control which achieve the stability for my project.

Finally , i understand that there are big difference between simulation and real life but also i think also you know that Matlab/Simulink are used in many projects to implement it in real life.

Most Helpful Member
Ok.. so you have your system set up and the arduino is only there to do what it is told to do.. a slave which reads sensors, controls the motor and relays data to matlab and back to the arduino. The matlab program is doing all the intelligent stuff. Is that it? You should be able to transfer data between matlab and arduino through serial uart. That would be the easiest thing to do.

I know that matlab can generate code etc. that can be deployed directly to the real life system. But it takes a lot of work to get to that point where you have that luxury.
Last edited: May 13, 2017
"I cannot prove it because it is too basic. Every mathematician knows that the simplest things are the hardest to prove."

Most Helpful Member
There is a saying that "image is worth thousand words". And the image in your original post is not working. Try to post that again..
"I cannot prove it because it is too basic. Every mathematician knows that the simplest things are the hardest to prove."
S 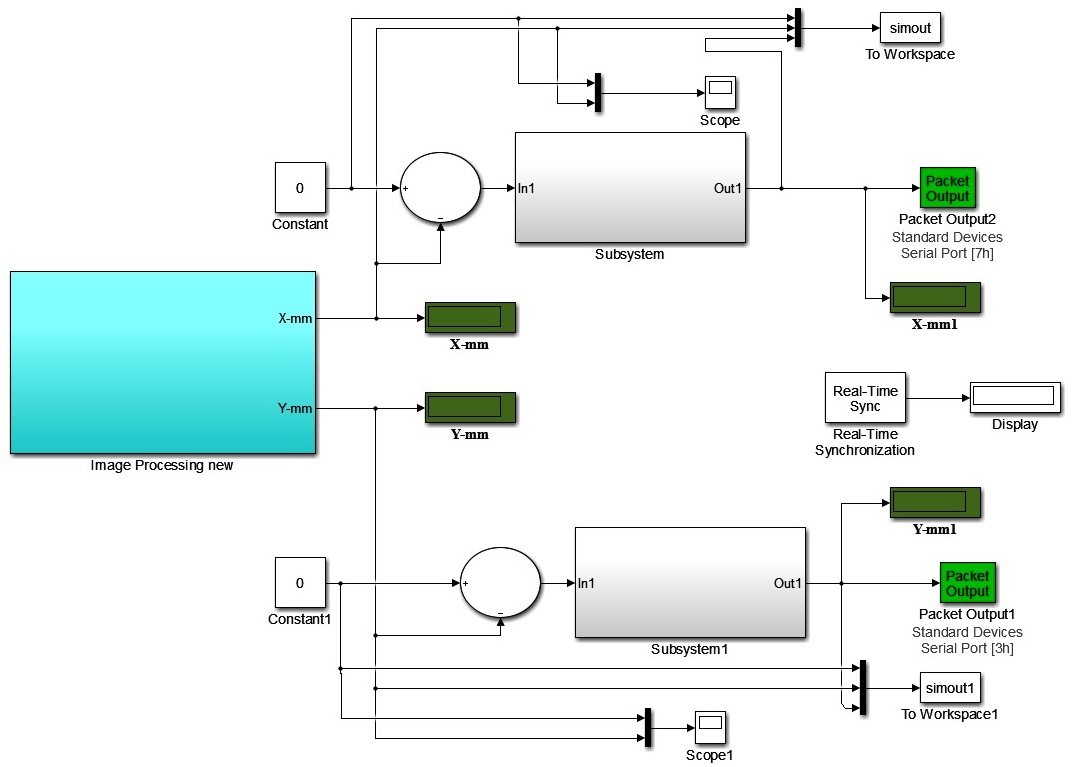 As shown in imageprocessing picture , it's program which detect actual object position and compare it desired position , then send the error to the arduino through packet-output (USB) . the imageprocessing program are run when implement the Test

the algorithm which i built to convert control signal (rad/sec) to pulses/sec dosen't work correctly with variable signals that came from controller . any suggestion to solve this problem?

M
Controlling with step vs. clock (pulses) for stepper motors