Hi all. This is my first time posting to this (or any for that matter) online forum, so please excuse me if I happen to break any rules or fail to adhere to any norms. I have the above mentioned TV set, it is just shy of 3 years old. About a year ago (during the summer) I had the brilliant idea of placing this device in the window. I was using it as a computer monitor and my desk at home faces a window that I rarely look out of. This window faces south and there is a large tree just outside of it, so I thought since it doesn't get much direct sunlight, what's the worst that could happen? Please hold your applause.
So this set up lasted for about a year until one day I try to turn on my monitor only to find the black screen of death. After doing some youtube research i realized that the sound and lcd components of the device are still working ok. However, the backlights (2 strips of led lights) will not turn on. The only tools that I have for electronics are multi meters, which to the best of my knowledge do not allow me to test any of the caps on the main board or the led lights. The device has one main board (see picture below) There is one cap that looks slightly swollen (circled in pic). I am hoping that either replacing the main board or replacing the led strips will bring the TV back from the dead. so my question to the forum is, given the facts outlined above is it more likely that the led lights overheated and need to be replaced or is it more likely something on the main board overheated and it needs to be replaced?
Last fact - after sitting in the window for about a year the TV backlights went out in the month of June as soon as the weather began getting warmer. 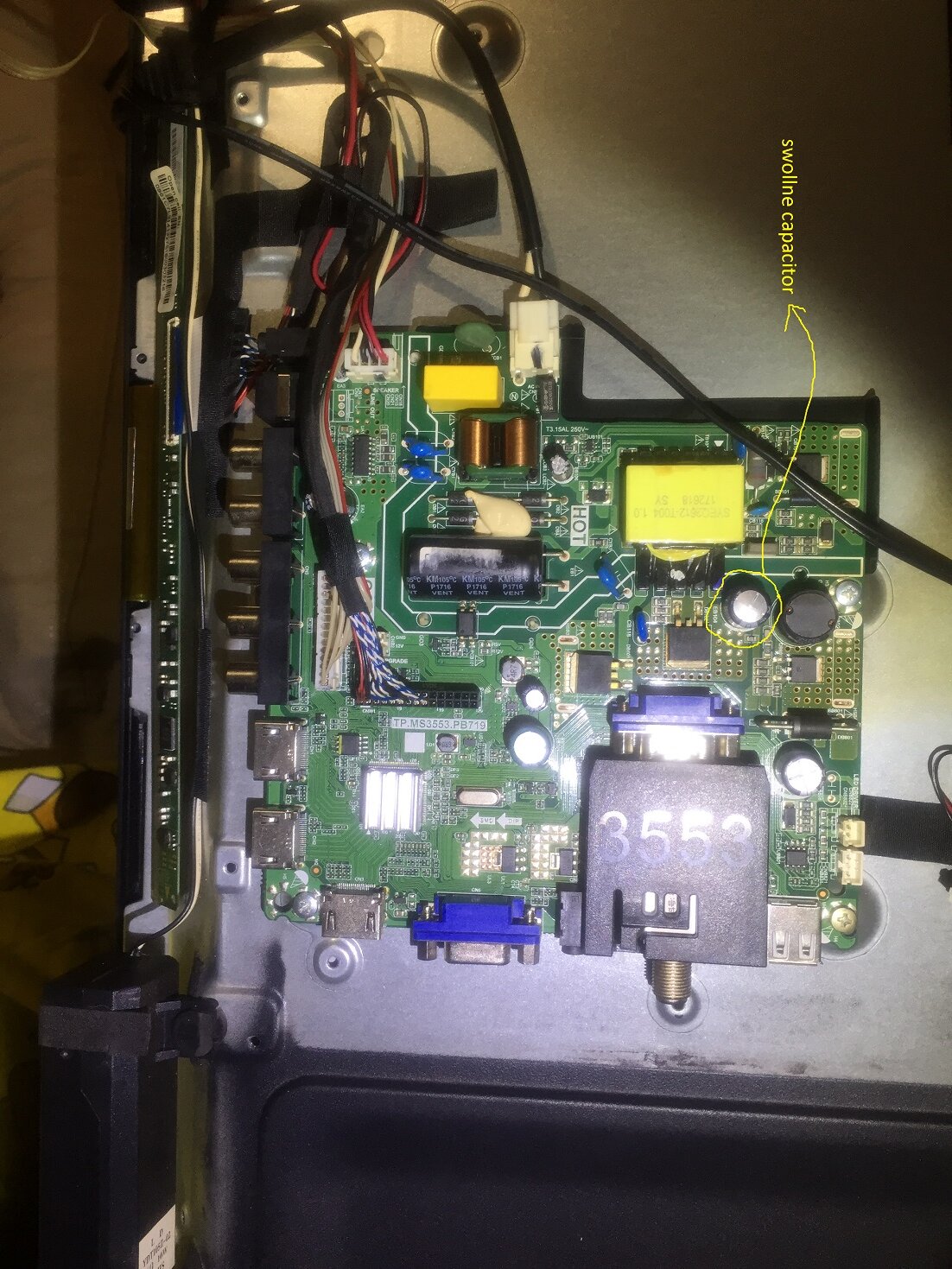 Swollen Caps are always needing replaced,, replace it and see.Low cost and may work.
Also leds can be checked with MM but be VERY careful when opening the panel.
Everyone loves war kittens!

Also a large failure on cheaper sets is LED's, and you can usually buy kits of the correct strips of LED's to replace them. However, disassembling an LCD panel isn't trivial, and it's VERY easy to make a catastrophic error and destroy the panel completely. Probably the larger failure of any LED's is in the badly designed LG panels, which they also sell to many other manufacturers - basically they cheapened the manufacturing until the panels are no longer capable of doing their job. However, your set doesn't sound like it uses an LG panel, as that's not their usual failure mode.

If you do decide to disassemble the panel?, take it slowly and carefully - study it extensively first, particularly how it's put together, and in what order - most disasters come from disassembling in what looks an easier way, but isn't actually so. The same applies when putting it back together as well.
PIC programmer software, and PIC Tutorials at:
http://www.winpicprog.co.uk
J

Thank you both for the replies. I went ahead and ordered a replacement capacitor for the swollen one...good thinking on that idea, total cost was $4.50 for 2 capacitors after shipping and sales tax.

Romando (or Nigel as well), any chance you could give me a brief lay of the land when it comes to testing the led lights with a multimeter. I am guessing that I would be using the diode function on the multi meter. Attached is a photo from ShopJimmy.com of the led strips. Where are the leads that I would test at?

I did take off the lcd panel previously, and I was extremely careful not to damage the lcd screeen (I had cut my teeth on this sort of project a few months ago when I replaced the front glass panel on my iPhone6). I actually rigged up an attempted DIY fix by placing some led lights from an old fish tank alongside of the nonworking strips. Those lights had a seperate 12V power supply, so I actually had to plug the tv twice. It was an epic failure as only about 30% of the screen would light up and the lights were not nearly as powerful as the originals. I guess i thought it was worth a try.

Most Helpful Member
You might not be able to test them with a multimeter?, it depends on the meter and the voltage drop across the LED's - a 9V battery and 1K resistor is probably a better bet, and you'll see if the LED lights then.

Is that picture the actual LED strips from your TV?, there aren't many LED's there, so they are likely to be seriously over driven and very prone to failure - just as with the notorious LG panels. The LG ones are so bad they go purple due to excessive heat, and the lens fall off them in the bottom of the panel.
PIC programmer software, and PIC Tutorials at:
http://www.winpicprog.co.uk
J

OK. My new capacitors should arrive on Wednesday. I'll swap out the swollen one then, and if that doesn't fix it, I will disassemble the screen from the set again and try to test the led's using a 9V battery and 1k resistor. I will log back on and let you know where I'm at then.

Also, the photo of the led strips was copied from online, not the actual ones. The photo is of a set of replacement strips for the same Sceptre model number and they are identical to the actual ones. So yeah, only 10 total lights for a 32inch TV. The strips are actually spaced about 6-8 inches apart inside the TV.

Jholmes said:
OK. My new capacitors should arrive on Wednesday. I'll swap out the swollen one then, and if that doesn't fix it, I will disassemble the screen from the set again and try to test the led's using a 9V battery and 1k resistor. I will log back on and let you know where I'm at then.

Also, the photo of the led strips was copied from online, not the actual ones. The photo is of a set of replacement strips for the same Sceptre model number and they are identical to the actual ones. So yeah, only 10 total lights for a 32inch TV. The strips are actually spaced about 6-8 inches apart inside the TV.
Click to expand...

That doesn't inspire me with confidence then - too few LED's means it all runs MUCH too hot, and the LED's will be prone to failure.
PIC programmer software, and PIC Tutorials at:
http://www.winpicprog.co.uk
J

The new capacitors arrived in the mail today. I swapped out the swollen one from the photo in my first post and to my shock and excitement, the TV works just fine now. The back-lights lit up as bright as the first time i ever turned set on. The repair only costed $4.50 and 10 minutes of soldering/desoldering! I was ecstatic! Here I was the whole time convinced that I would need a new set of lights or a new main board, and all I needed was one dirt cheap capacitor!!!

Thanks for your help on this Nigel. Much appreciated! 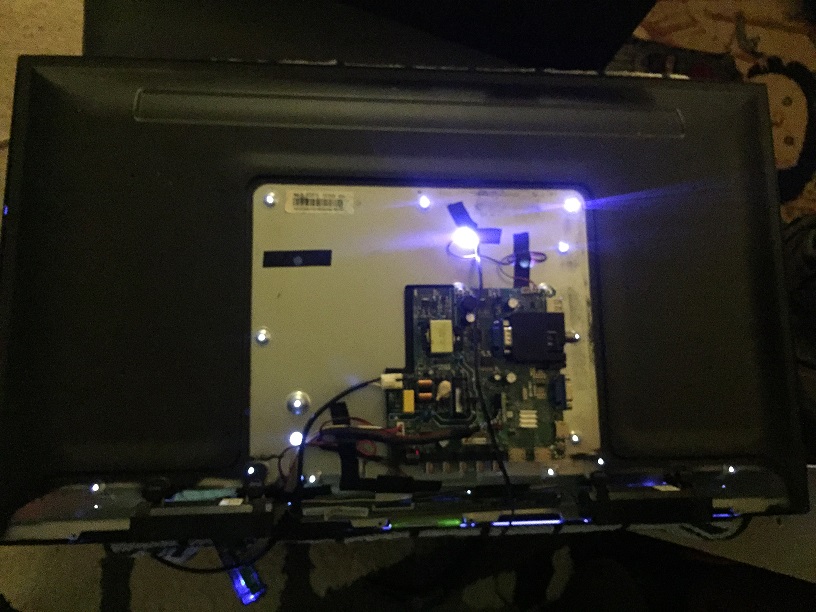 Most Helpful Member
Well done, nice when things work. The mass failure of cheap electrolytics has been by far the biggest problem in electronics over the last few decades - I've changed thousands of them.
PIC programmer software, and PIC Tutorials at:
http://www.winpicprog.co.uk
You must log in or register to reply here.