Most Helpful Member
My friend, an amateur astronomer, has a older telescope that uses a 120Vac 60Hz 3W 0.25rpm Synchron motor and gear train to keep the star being observed in the field of view. The motor looks like this: 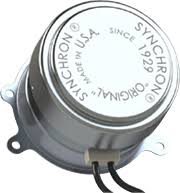 The gear reduction ratio is such that the scope mount would turn 360 degrees in 24 hours if the Synchron was fed 60Hz. In this application, the frequency of the drive is variable from about 50Hz to about 70Hz with a pot, so you can chase a star, center it in the field of view, and then dial back the rate so as to keep the star centered. The power source is a 12Vdc battery.

The electronics has died and he brought it to me to fix. The electronics that drives the motor is in a potted assembly, and even the transistors and ICs on the pcb that are visible have had all their markings ground off. The dickhead builder that originally sold this has died, leaving no information.

I'm thinking it is easier to build a new drive than to try to unpot and trace out the schematic of the existing one, especially considering that the part numbers were ground off chips and transistors...

I am thinking of using a pot-controlled 555 astable running at 120Hz +- 20Hz, into a CMOS flip-flop to divide the frequency by two to get two symmetric 180deg-out-phase square waves at near 60Hz, driving the IN1,IN2 inputs of a L298 H-bridge driver like this: 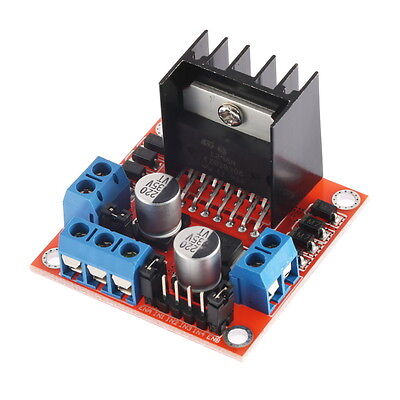 driving a 120Vac to 12Vac@2A wall-wart transformer turned around to make it a step-up transformer. I have all the parts to knock this together.

The DC resistance of the motor is 856 Ohms, but it is highly inductive. The motor will run at any voltage >~70Vac. When powered from a nominal 120Vac 60Hz, the AC running current is 30mArms.

Any other ideas?
Last edited: Feb 12, 2015
I am an engineer and an academic. When I talk about current it flows from positive to negative.
Most of the circuits I post have been simulated with LTSpice. You should breadboard them. If I post
a picture that is too small, click on it, and it will open full size.

Seems like a reasonable plan. Leads me to wonder how the knob controlling the drive speed of the old, higher-end turntables for vinyl records worked (remember the neon stroboscope built into them?), and if the same scheme would work for you. Somehow I suspect that was even simpler.
K

I used a center-tapped transformer with the CT at 12V and then switched the outer winding to ground 180 deg out of phase.

Most Helpful Member
I have a small collection of mains powered clocks amongst other things.
A couple I have rewound so instead of running on 240v ac, they run on 12v ac, and are powered by a xtal oscillator which drives a single bridge, it works well, your idea sounds perfectly reasonable to me do it, you might want to put some 1mh chokes inline with the power leads to reduce any rf from escaping.
Red to black, black to red and blue to bits.

Mike, do you need to convert the square wave to a sine wave, or something similar? I wonder of the sharp rise and fall time may saturate the reverse connected wall wart.
The great thing about electronics is unlimited ways to do the job. The only limit is one\'s imagination. I generally think my way is best.
Show me a different way. I have an open mind.
K

Most Helpful Member
K7: It will work just fine. I did the identical telescope project using a square wave, but not the same way.

Most Helpful Member
The wall wart will saturate if you drive it with a frequency lower than it was meant, still might work with a current limit resistor is series with it, the first pulse will move the motor.
Red to black, black to red and blue to bits.
D

Most Helpful Member
The crystal controlled oscillator driving a small 120 to 12-0-12 transformer in reverse seems the best idea. You should keep the area under the voltage/time graph to be no more than it would be on a 120 V 60 Hz system, to avoid saturating the transformer or the synchronous motor.

You will want a much better accuracy than you will get with a 555.

About 10 years ago I did some work on this telescope:- https://www.ast.cam.ac.uk/about/36-inch.telescope

It has an 80 W 350 V 3 phase 50 Hz synchronous motor to rotate it against the earth's rotation. The 50 Hz mains is not accurate enough to track the telescope accurately, especially as the mains tends to be faster at night to catch up for the extra loads that cause it to slow in the day.

Also the telescope had to move slightly slower than 1 turn / day, due to atmospheric refraction (https://en.wikipedia.org/wiki/Atmospheric_refraction) and so the nominal frequency was 49.99 Hz or thereabouts.

The 1950s valve frequency controller had failed, and they were running on mains directly, which meant making manual corrections every few minutes. I provided a converter that stabilised the frequency and gave 0.001Hz steps of adjustability, and allowed it to run for an hour or more without manual correction.

For a small telescope, I would think that mains would be accurate enough, as it is almost always ±0.1 Hz. You should aim for that accuracy.

Notes:- The 36 inch telescope runs on the 1950s standard voltage for Cambridge, 200 V line - neutral
It has two faster motors for moving from one view to another. Those are locked when the slow motor is keeping it in line with one star.
http://twitter.com/mtrak_uk

If you use a xtal and a divider you'll get better accuracy, but you'll still need some way to speed up and slow down the drive to get the image central, you might be able to do this put putting a varactor diode in one leg of the xtal, then drive it with a dc voltage from a pot to pull the xtal one way or the other, this will only give you a limited range, another more complex way would be to use a phase locked loop, sync the loop to an xtal osc, then break the system out of the loop using a pot on the vco section.
Red to black, black to red and blue to bits.
D

Most Helpful Member
I don't think that a crystal oscillator can be adjusted enough to be useful. However, the telescope has to have some way of adjusting the view when running on 60 Hz from the grid, so I wouldn't have thought that any frequency adjustment would be needed.
http://twitter.com/mtrak_uk

Diver300 said:
I don't think that a crystal oscillator can be adjusted enough to be useful. However, the telescope has to have some way of adjusting the view when running on 60 Hz from the grid, so I wouldn't have thought that any frequency adjustment would be needed.
Click to expand...

The controller I am replacing was adjustable with a pot from about 50Hz to about 70Hz. The user mechanically disengages the gear drive, moves the scope to an approximate location using a lower power spotting scope, re-engages the drive, and uses the pot as a joystick to center the star in the field of view of the more powerful scope, both speeding up and slowing down the drive in the process.

I have bread-boarded the circuit I proposed back in post #1 and it is running fine. I'm running the frequency from about 50Hz to 70Hz, and the wall-wart tranny is not complaining. The output waveform is a squarewave at about 200Vpp. The circuit draws 0.6A at 12.6V, so a 8Ah SLA will run it all night.
I am an engineer and an academic. When I talk about current it flows from positive to negative.
Most of the circuits I post have been simulated with LTSpice. You should breadboard them. If I post
a picture that is too small, click on it, and it will open full size.

Looking for a 120vac - 12vdc transformer