Most Helpful Member
I still don't understand. You said:

shortbus= said:
I've posted the original of that circuit several times, and have always been told it is no good.
Click to expand...

But it is still not clear which circuit you believe is "no good." Any links to those anonymous posters who claim it is no good? Simply put, I find it hard to believe that such a successful chip is "no good." Mayby posting the design that is "no good" would help clarify that ambiguity.


shortbus= said:
As one output switches off and the other switches on. Which for motor driving doesn't make a difference. But if using it to drive logic circuits that are edge triggered it does.
Click to expand...

I don't understand. Can you expand on that reasoning a little?

Most Helpful Member
Actually it is for a guy that wants to drive about 15 amps of LED strips with music. So it is music in PWM out.

ronv said:
Actually it is for a guy that wants to drive about 15 amps of LED strips with music. So it is music in PWM out.
Click to expand...

We have all seen it. Merry Christmas to that guy.
Uncle $crooge

But it is still not clear which circuit you believe is "no good." Any links to those anonymous posters who claim it is no good? Simply put, I find it hard to believe that such a successful chip is "no good." Mayby posting the design that is "no good" would help clarify that ambiguity.

I don't understand. Can you expand on that reasoning a little?

I don't think either is no good! I think both will work!

The one person that sticks out in my mind, saying that the wizmicro circuit is bad is sgtwookie on AAC. But many others over the years have also chimed in, don't have links to them, sorry. The wizmicro design is the one that was said to be no good.

The SG/KA 3525 chip is a good PWM chip in my opinion, not disputing that at all. The L298 supposedly drops too much voltage across it.

On the SG352x series of chips there are two outputs, each capable of 0% to 45 - 49% duty cycle. The only problem is the is a dead time between the outputs, they are not 'seamless'. They say the minimum duty cycle is 45% of each output but can be up to 49%. If you look at the timing diagram, in the block diagram on page #2 of the data sheet https://www.google.com/url?sa=t&rct...51P7VtFlavz3ekKTZUwHvlA&bvm=bv.76802529,d.aWw you can see it. The end of the first duty cycle does not coincide with the start of the second. In the circuits the chip was developed for this wouldn't be a problem. I tried to use it as a PWM to drive some logic and the dead time caused a problem. I wasn't saying Ronv was driving logic or a motor, just making a comment about the SG/KA 352x series of chips. Sorry I broke into the grownups talking.

Most Helpful Member
Yes, the 298 does have a lot of drop.
I like the wired or - saves 2 diodes. 1 resistor 1 cap. can't get much simpler than that.
Thanks, guys.

ronv said:
I'm in search of a really simple PWM IC, like the SG3625 except able to get a duty cycle close to 100%. It would be nice if it had a spice model - wish wish.
All I want to do is put a voltage level in and get PWM out - not a power supply or anything.
Click to expand...

A 555 timer circuit can give you an Adjustable duty cycle range between 1 to 99%.
So Almost Completely OFF to Almost Full on.
I No Longer accept Private Messages on here.
All Emails to me Must Contain the Word \"Electronic\" in the \"Subject Line\"
or they go Directly to my Junk Mail Folder.
Email me at: chemelec@hotmail.com
Website: http://chemelec.com
S

I have a dumb question about a wired 'or'. with no diodes. How will that work, being that the SG352x chips are of the totem pole output type? With out diodes in the 'or', when one is on the other will sink its output. That is the reason for using two diodes to make the 'or', at least that's how I understand it.

The outputs of that series of chips(SG/KA352x) alternate they have a "small" deadtime between them. I know I'm far from the rest of you guys level of understanding of this stuff, that's why I'm asking.

Most Helpful Member
It's really kind of sneaky.

If you ground both outputs and add a pull up to say +12 to Vc, the bottom transistors still switch, but they are already at ground. So the only thing doing any work are the top ones.

Most Helpful Member
I had written a similar reply earlier, but was waiting to see whether I had a chip I could test for the effect of the deadtime. I didn't and the time got away from me. However, looking at the deadtime resistor value vs. discharge time figure, we can see that deadtime does not go to zero. 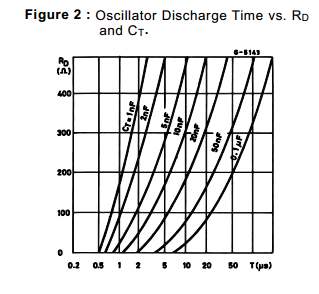 I am not certain how that would effect the OR'd output in real life, but it may cause a glitch in the output. For example, at 10 KHz, the period is 100 µS. A 1-µS deadtime when both of the top output transistors are off would limit the theoretical duty cycle to 99%. Perhaps more important than that "glitch" would be the heating from turning the power mosfets on and off.

Edit: I just noticed that the attachment I had uploaded for my previous draft wasn't deleted and apparently can't be deleted. Please ignore what is just a duplicate of ronv's attachment.

If you ground both outputs and add a pull up to say +12 to Vc, the bottom transistors still switch, but they are already at ground. So the only thing doing any work are the top ones
Click to expand...

OK, another dumb question. If the outputs(pins #11&#14) are grounded, where does the output come from then?

Most Helpful Member
I have tried to draw the changes with Paint -- not very good. 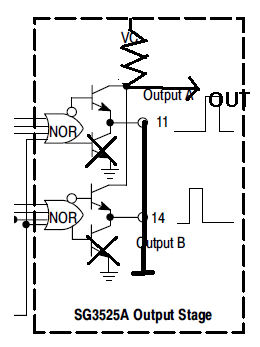 By grounding the outputs, you effectively remove the bottom two npn transistors. The remaining two are open collector. Add the pull-up resistor to a source (VC) and take the output where I have the arrow. When either or both are on, output will be low.

Most Helpful Member
Thank you John! After asking the question and thinking about it while working later I came up with the answer on my own, just like your answer. If I keep at this long enough I'll finally understand more about it. Hard to learn something new at my age, especially something this complex.
S

Most Helpful Member
Another dumb question about this. When grounding the output pins and using the Vc pin as the PWM output, doesn't this mean that the voltage used to the PWM is then reversed/inverse? Buy that I mean, a lower control voltage gives a longer duty cycle instead of a shorter duty cycle. Sorry if I seem to have hijacked the thread, just trying to learn more.

Most Helpful Member
Yes, that is true. So in some cases you might need to reverse the input or invert the output.

Need an IC for DC to PWM conversion