Hey all I am wanting to know if there is an IC that allows me to do the following:


The latter bullet there is the main goal. 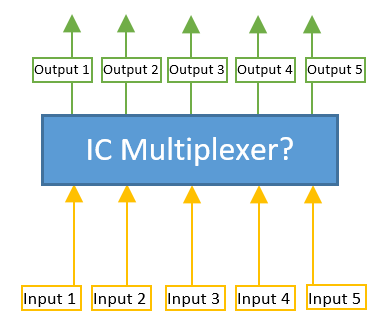 So in the image example above say that I needed the following examples:

What I would be hooking up to the input would be either Ground, 5V or 3.3V which would need to output the same as its input.

Note that I plan on using an Arduino so if the IC requires interaction from the Arduino in order to switch the outputs then I will have the means to do so.

Is there any IC that would allow me to do the above?
P

Just to be clear, are you intending in switching analogue or digital signals (sounds like analogue if your possible input states are 0, +3.3, +5)?
A multiplexer generally takes n inputs to 1 output (or 1 input to n outputs as a demultiplexer) , so isn't exactly what you want - what you've described is more like a matrix switcher. If only only need to create ONE route at a time then #3 above is how I would go about it - if you need (for example) input 1 to got to output 2 while input 3 also goes independently to output 4, then that's going to be rather more complex.

I had to read Pommie's idea twice before it clicked, but that's also a neat approach, if you really do just need to deal in three-level logic.
"Don't Fear the Repair."
S

I will need to be able to use all of the inputs and outputs at the same time.

Most Helpful Member
What you want is called a crosspoint switch or a routing switcher. Maxim used to make specialized ICs exactly for this, for telecom, audio and video signals. Also check Analog Devices and Linear Technology.

Would the Crosspoint switch work even if its Analog for the RX/TX? The RX/TX/5v/3.3v/grd will be coming into the IC via a FTDI ft232r chip. Also most of these I've seen are either for Audio/Video or LVDS signals?

You will need 15 pins from the arduino.

It will be possible to have the same signal going to all outputs, but you can control that in software.
P

Most Helpful Member
Why do you need to switch them? What are you trying to achieve?

You will need 15 pins from the arduino.

It will be possible to have the same signal going to all outputs, but you can control that in software.
Click to expand...

Would you be able to create a quick schematic of that?

unclejed613 said:
are you trying to "autoconfigure" a cable to carry power supplies plus bidirectional data?
Click to expand...

More like using my software program to configure what pins have what output.

StealthRT said:
More like using my software program to configure what pins have what output.
Click to expand...

Why would you want to use a bigger board, drill holes, buy chips and do all that soldering instead of just add a few lines of code to set which pins what.
.When you're dead, you don't know it, the pain is only felt by others. The same thing happens when you're stupid.
S

Because i will be using a FTDI ft232r chip and the RX/TX lines will differ depending on what board is being used to program it using the FTDI.
P

Most Helpful Member
Surely it would be simpler to just make a few different jumper cables for the different configurations.

Actually, the amount of effort you will use to make this solution is far more than just making up programming cables with multiple FTDI chips.

StealthRT said:
Would the Crosspoint switch work even if its Analog for the RX/TX? The RX/TX/5v/3.3v/grd will be coming into the IC via a FTDI ft232r chip. Also most of these I've seen are either for Audio/Video or LVDS signals?
Click to expand...

If you use a ready-made analogue crosspoint switch IC, or "home-brew" a crosspoint arrangement using analogue switches, then I think your main limitation will be the allowable current and voltage drop. If I understand correctly, you are going to switch some power rails (+5, +3v3) - these ICs are designed for switching signals, and are not rated for very much current. You'd have to be careful that you didn't exceed the ICs maximum switching current, or end up with too much voltage drop through the switch to drive the load at the other end.
I'm not saying it can't be done, mind you.
"Don't Fear the Repair."

Most Helpful Member
Still don't understand why such a complex solution is required. If the boards to be programmed can't have the same programming connector (why not) then a few programming cables is the simplest solution. No need for any of this crazy signal routing. Seems like an over complicated solution to a simple problem.

A
Communication with PLC using 4-5 digital inputs and some outputs??