Most Helpful Member
i will try xc8 with mplab, see if it works better
My mind runs at 100 mph, but our house has a 20mph speed limit, so I am always in the poo.
I am officially GOBBY!
My advice is guaranteed upto the amount you have paid for it.

Little Ghostman said:
I could, but i got to jump at some point, just been reading the MC forums, i cant believe MPLABX is as old as it is and still as buggy as the day it was first beta!! why on earth dont they just give up on it!! They had good tools at one time and now it seems the have gone down hill completely, certainly not the company they once were.

Thats one reason i like sil labs, that and they have some amazing chips, many of there 8051 chips knock the pic 18f's out the ball park. main downside is size, they tend to use BGA etc
Click to expand...

99% of the problem is on the other side of the monitor screen with MPLABX.

Version 4.15 works like a charm on Linux for some very complex software projects.

I even have the MIPS bare-metal tool chain as a custom compiler in the IDE. 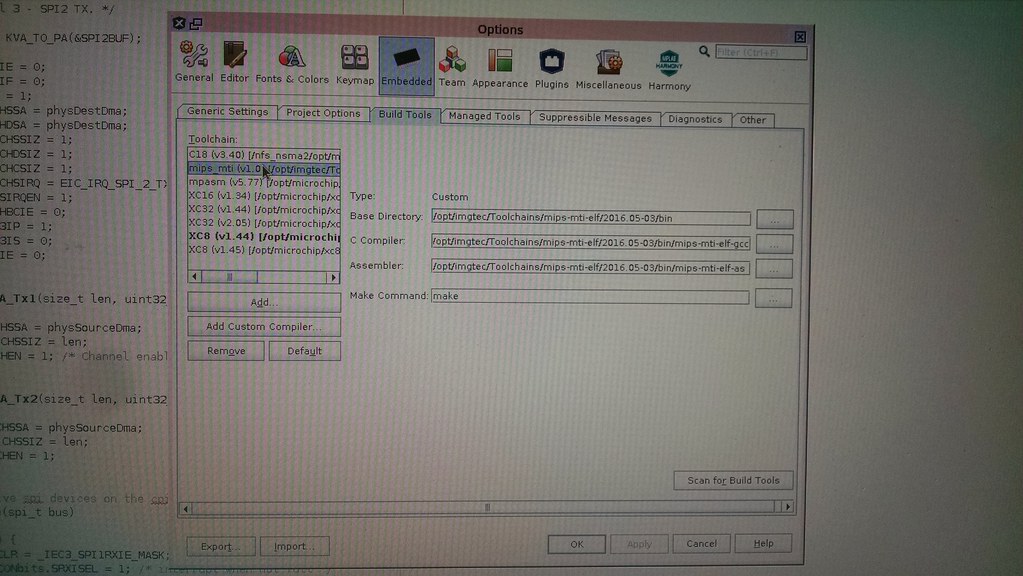 Last edited: May 10, 2018
My comments are my own and don't represent the views of any company.
In GOD we trust, all others we monitor.

But on Linux Mplab X has been really good, And after getting the hang of IPE it works find with the 3 programmers I have.
Plus The Mplab express work fine too. Windows it's kind off slow on a four core AMD box . But my Linux Box is a 2 core AMD 64 bit there 3ghz 4 gig ram.
the 4 core is 64 bit 2.1 ghz 8 gig of ram I watch movies with it and code on Linux I use Swordfish on Linux too I works fine using IPE to load code But I can't run my full copy on there so I keep the windows open LOL.

As a side note I can code for AVR on MPlab X now too.

Plus the pic 32 is GCC which you can use it for free Got that added in too it's just a shame they bloat the xc8 running it free as much as they do looks like they would see that a free compiler
Like the AVR has would be a good idea but then they own AVR now to go figure.

99% of the problem is on the other side of the monitor screen with MPLABX.
Click to expand...

I really have to say that's right cause it's been hard getting the hang of Mplab x lots of there samples and even the learning samples on the Microchip's Dev site is old and dated.
It just doesn't match the newer ide name changes and how it saves stuff. But after you get the hang of it The Ide is great. Way better then 8.92 I think I hated 8.92
Last edited: May 10, 2018
Burt
be80be
“No beard, no belly, no guru…”
T

99% of the problem is on the other side of the monitor screen with MPLABX. Version 4.15 works like a charm on Linux
Click to expand...

That may well be true of linux, but on windows 99% of the problem is on the INSIDE of the monitor screen. Some features work fine, while others work randomly, if at all.

As I mentioned, I don't have a single setup where the programmers/debuggers work reliably, while under MPLAB 8.92 they all work... PK2/PK3/ICD3/REALICE.

Perhaps it's my expectations... I don't consider having to unplug/replug usb devices multiple times/shutdown MPLABX/reboot machine/stand on one foot while crossing my fingers and making secret incantations "reliable operation". Some versions of MPLABX are better than others, but they keep changing things so it's not as simple as "newer is better".

I've used all these same tools for eons and only have problems with MPLABX.

Most Helpful Member
USB issues are mostly Windows based and are not related to MPLABX software bugs. The latest MPLABX Windows versions are trying to use the latest buggy version of Windows USB drivers instead of the legacy API. The USB power suspend option of windows is usually the killer.
https://www.windowscentral.com/how-prevent-windows-10-turning-usb-devices
https://docs.microsoft.com/en-us/windows-hardware/drivers/usbcon/usb-selective-suspend
My comments are my own and don't represent the views of any company.
In GOD we trust, all others we monitor.

Most Helpful Member
Just for info, I'm presently using MPLABX (4.15) with ICD3 on a couple of DSPIC33-based projects and it's not given me any problems at all.

I do use it with the CCS compilers though; I don't know how much difference that may make.

Most Helpful Member
Well mint is 1.8 gigs and the old laptop i want to put it on only has a cd drive!! So need to find a way to get it on a old blank laptop, need to think about it in the morning as i am really tired
My mind runs at 100 mph, but our house has a 20mph speed limit, so I am always in the poo.
I am officially GOBBY!
My advice is guaranteed upto the amount you have paid for it.

Most Helpful Member
I managed to get it booted from USB, the laptop has the security setting to lock the bios out. By pure luck the USB port boots first!! So now got cinnamon running on it, i should have gone with a lighter version really. I should get mplab etc on it by end of weekend, its taken ages getting some the stuff updated and some the other programs i need on it working.

First impression of mint is i like it, diferent from ubuntu but kind of the same also, bit like the unholy love child of win xp and ubuntu lol
My mind runs at 100 mph, but our house has a 20mph speed limit, so I am always in the poo.
I am officially GOBBY!
My advice is guaranteed upto the amount you have paid for it.