Before I begin winding my coils around rods for wireless power, I was using online calculators to calculate inductance because in my other thread, someone recommend the inductance should be in the order of millihenries.

If a rod has a permeability of 20, then I'll need to make a lot of turns in my coil to achieve millihenries inductance.

If all other parameters are the same and permeability is a high number, then the inductance may even reach henries.

I'm looking at a bunch of rods to buy from ebay due to their price and some sellers suggested some are used for radio.

I could also visit a store but they could charge me alot of money just for a single rod.

Is there a way to identify a permeability of a rod?

Most Helpful Member
Perhaps you should try reading the other thread - you don't want ferrite rods, for the power coupling to work you must have air cored coils.

Most Helpful Member
Most of the wireless power I have seen use air. Many turns! Nigel knows many things. If most people use air you should to.

I did wireless power using a "transformer" like this.
Red wire on one side. Blue wire on the other side. Green is "flux" in the air.
The gap was small. And the "E" cores must be aligned just right. (if the E is rotated 90 then there will be no power)
Also this core is very fragile. 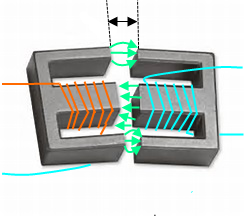 mik3ca said:
air then means more windings tho because research tells me air permeability is 1
Click to expand...

Feel free to wind your coils on ferrite rods, but it WON'T WORK!!

You've seen various examples on the net, you've even built one - but completely ignored the coil design, which was why it didn't work.

You're not winding RF chokes, you're effectively winding the two halves of an air cored transformer, it won't work if you don't do it right.

I'm tending towards the belief that you're nothing but a troll, continually posting utter rubbish and totally ignoring all advice given, just to gratify your own self importance.
PIC programmer software, and PIC Tutorials at:
http://www.winpicprog.co.uk

Most Helpful Member
You could make two air-cored coils then put them both on a shared ferrite rod to improve the magnetic coupling between them.
My circuit designs should be regarded as experimental. Although they work in simulation, their component values may need altering or additional components may be necessary when the circuits are built. Due safety precautions should be taken with any circuit involving mains voltage or electrostatic-sensitive components.
Alec's First Law:-
Every problem has a solution (given the right information and resources).
M

Nigel Goodwin said:
Feel free to wind your coils on ferrite rods, but it WON'T WORK!!
Click to expand...

Now I'm completely confused. Audioguru said to me that by wrapping the coils around the ferrite rod increases inductance and changes inductance so that nothing would overheat as much, and now others are telling me to use air core. Are the rods supposed to be useless then?

You've seen various examples on the net, you've even built one - but completely ignored the coil design, which was why it didn't work.
Click to expand...

I actually did the 30 turns and many examples were different variations. One even did a coil by making a long PCB trace into a spiral, but the problem is no one is technically explaining to me in great detail (maybe except audioguru) why one variation works best over all others.

You're not winding RF chokes, you're effectively winding the two halves of an air cored transformer, it won't work if you don't do it right.
Click to expand...

I'm tending towards the belief that you're nothing but a troll, continually posting utter rubbish and totally ignoring all advice given, just to gratify your own self importance.
Click to expand...

Say there was a simple light circuit consisting of an LED, a resistor, and a 9V battery and the objective was to turn the light on and someone didn't know how to do it. Say he got the response of this:

The problem with that response is that there's no technical valid reasoning. This response would be better:

Most Helpful Member
Commercial 'phone chargers use ferrite, I had a look inside one, but the coil is a pancake coil not a stick, a am aerial type loopstick will have a ui or permeability of about 3000, but it wont be a fat lot of use for wireless power as the magnetic field will be concentrated at the smaller diameter not so much across the width, I'm not an expert in the field however the larger the face area the better.
I've had success with wireless power as you've seen in your other post, 50ma or so is easy, an amp wouldnt be so hard.
If you really want to use ferrite maybe you could find a circular ferrite core smps transformer and use it in its 2 halfs with a winding on each, if you can get them a mm or so close togther you stand a chance of decent power transfer.
One difficulty with higher power is that the core will tend to saturate when its mate is not in range, as forcing the magnetic field to go through the air when the transformer is split will massively lower its inductance, a self resonant design is probably the way to go.
To get a rough idea of permeability wind a 100 turn coil, measure its inductance, then put it over the ferrite, measure the inductance again, divide the latter by the former to get rough permeability, this is only ball park.
Red to black, black to red and blue to bits.
M

mik3ca said:
air then means more windings tho because research tells me air permeability is 1
Click to expand...

The problem with a 'rod' is that the air gap is as long as the core itself. That big of an air gap will make the construction look only a little better than air. The other problem is that it is hard to complete the magnetic circuit which must start at one end directed outward and end at the other end directed inward. Whatever you use as a receiver has to be able to be part of that circuit, and because one end of the rod will be very far from the receiver it will make a very poor magnetic path.

The idea is to keep the entire magnetic path as short as possible, with emphasis on the shortness of the air part of the path. So if you look at different geometries you see different results. A round flatter coil works better because the turns at the back of the coil are not that much farther from the receiver than the turns at the front of the coil.

I am not sure if you should get too hung up on the value of the self inductance. There will be an optimum value yes but it may be hard to get.

What you could try if you feel you need to use a rod is use two rods, one for the transmitter and one for the receiver. Keep the two rods parallel and as close together as possible.

Take a look at ron simpson's post and see how that setup words, then compare it to the two rods. Note the difference in the air gaps, which makes the most difference in power transfer. The other idea is to get the mutual inductance as high as possible, and the smallest air gap(s) achieves that.
One test is worth a thousand expert opinions, but one expert specification is worth a thousand tests.
Mathematics is the shortcut to understanding nature.
If i miss something you posted or something you think is important, feel free to PM me.

Most Helpful Member
The ad for the Chinese wireless charger showed flat coils with no core and said that the coils were tuned to resonance. The air gap between coils was very small, a piece of paper or a thin plastic housing.
Uncle $crooge

mik3ca said:
Before I begin winding my coils around rods for wireless power
Click to expand...

How much power? A Google of Electric Toothbrush Chargers will bring up dozens of low power circuits. Additionally a Google of Inductive Charging Circuits should provide some ideas. The guy with some good ideas on this subject was Nikola Tesla who unfortunately is no longer with us.

The toothbrush I took apart; the battery charging coil is inside the transmitting coil. The coupling is probably real good.

ronsimpson said:
The toothbrush I took apart; the battery charging coil is inside the transmitting coil. The coupling is probably real good.
Click to expand...

I probably should not post this but I have an Oral B electric toothbrush and that sucker has been going for about 10 years now. Just watch, tomorrow morning it won't make it through a brushing.

Most Helpful Member
Practical electronics did a project for a marine xenon strobe back in the 80's, it was inductively charged to maintain water tightness, the article might be online.
Red to black, black to red and blue to bits.