All 4 same 500w inverters not measuring on output volts. Frequency meter says 20khz is there. No readings at all on output terminals, on any unit. Should I add fast diode to terminal and try to measure DC? Does cheap brand ANALOG TYPE face meter measure at 20khz AC?? Please advise. No load applied , and have board type battery Chinese ossiloscope.
Last edited: Jun 15, 2022
Sort by date Sort by votes

What does analog meter datasheet say its response is ?

The inverters have min load requirements, and are you meeting them ?

You trying to measure RMS or average or peak ? Consult you meters user manual
to see whats supported.

Do you have an oscilloscope and HV probe ?

russwr said:
All 4 same 500w inverters not measuring on output volts. Frequency meter says 20khz is there. No readings at all on output terminals, on any unit. Should I add fast diode to terminal and try to measure DC? Does cheap brand ANALOG TYPE face meter measure at 20khz AC?? Please advise. No load applied , and have board type battery Chinese ossiloscope.
Click to expand...

Multimeters are generally designed specifically to work at 50/60Hz (i.e. mains frequencies) - it's possible that they may read nothing at all by the time you reach 20KHz. This is why you can't use multimeters as AC millivoltmeters (with a few exceptions).

Personally I'd never have even tried it, as it's so far outside spec.

You could certainly try a diode, and see if you can read DC from it.

Assuming the inverters are mains voltage?, stick an incandescent bulb on it (a 60W bulb with a couple of wires soldered on is a VERY useful piece of test equipment) - see how bright it lights up - this has the added advantage of putting a load on it, as danadak says it 'may' have a minimum load requirement.
PIC programmer software, and PIC Tutorials at:
http://www.winpicprog.co.uk
Upvote 0 Downvote
R

Thanks for the help! By using a different, miniature, hand held, analog face multimeter, I can now measure volts on all sets of terminals of inverter. 20Khz voltage was not reading at all, on both digital meters. Analog has high frequency capability. I should not have sold all my old Heathkit meters.
Upvote 0 Downvote

Most Helpful Member
Some of what you are asking depends not only on the meter used but also on the inverter output signal. Inverters, depending on design may output a MSW (Modified Sine Wave) or a TSW (True Sine Wave) as well as a few other waveforms.

Most low cost handheld multimeters are Average Responding RMS Indicating while the better units are True RMS Responding. In the below image both meters are measuring a true sine wave. 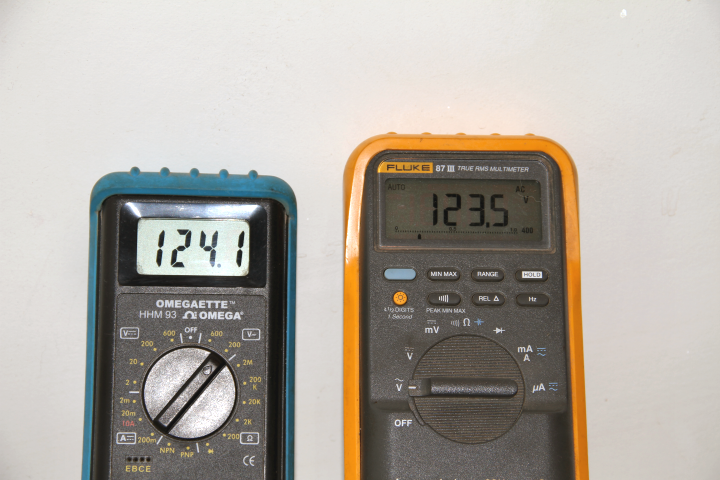 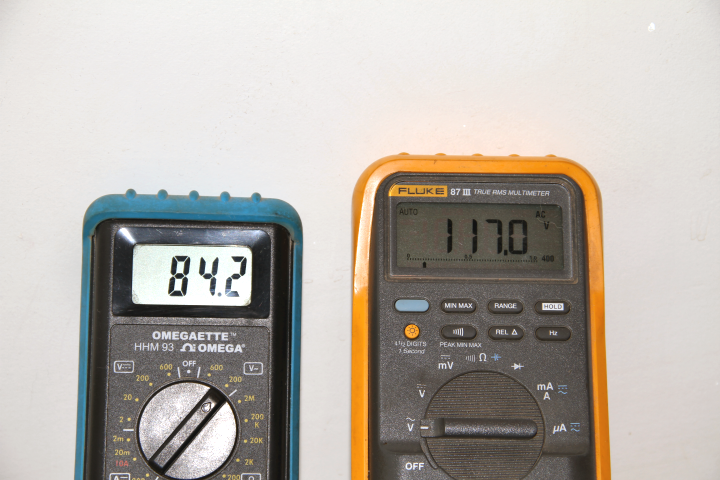 Almost all of the older VTVMs like HealthKit and similar were average responding RMS indicating designs. In the above image both meters are measuring the same signal at 60 Hz.

One of the best older VTVMs of the day was the HP 400H which only had an upper frequency response of 4 MHz. Also the earlier portable meters like the old Simpson 260 presented a small load to the signal being measured, typically 5,000 Ohms/Volt on AC voltage ranges. Todays better DMMs have a typical input impedance of 10 Meg Ohm presenting no load to the source.

Just a few things to keep in mind.

Ron
Please do not PM me with forum related questions. Let's keep things in the open forum. Thank you.
Upvote 0 Downvote

The output could also be a PWM representation of a sinewave that would need to be "filtered" by the load. You should not try to view the output on a scope unless you KNOW for a fact that the probe and the ground clip are isolated from both Earth and Neutral.
We never have time to do it right; but we always have time to do it over.
Upvote 0 Downvote
You must log in or register to reply here.