Most Helpful Member
Just having a play with some new boards I've had made, currently running a PIC16F18857 and creating a clock, driven by the 32KHz timer1 crystal. The various jumpers allow configuration for a number of purposes, including the 32KHz TMR1 clock, a normal high speed crystal, 12 selectable LED's, and IR remote input and output. The supply voltage can be selected as either 3.3V. 5V. or raw voltage in (such as an 18650). 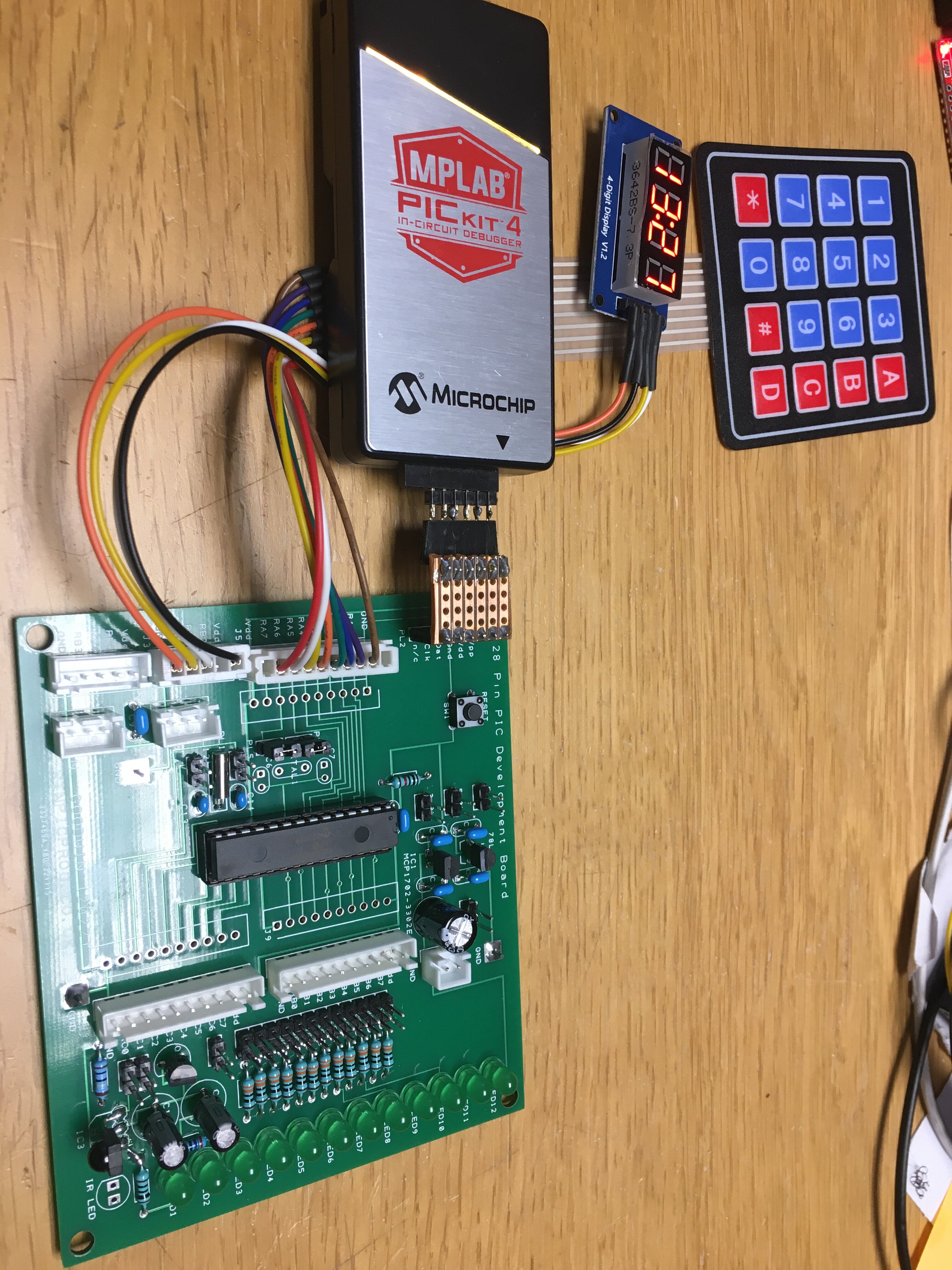 Most Helpful Member
Would be good to see what other projects members are ' playing ' with .. l have built a time maching , and gone back to the 1980's and revisited a Z80 system,( plus a PIC )I have lots of ideas , and some progress.

granddad said:
Would be good to see what other projects members are ' playing ' with
Click to expand...

I have a couple of 70s recreation projects on the go:

A rebuild of my very first working computer, using the original (or original type) main ICs, but with modern RAM and a GAL for address and control decode rather than dozens of TTL ICs; the original used 4 - 5 board in a rack, mostly for all the decode and timing etc.
This also eliminates all the bus driver/receiver ICs, as with so few devices on the data bus, they can all connect directly.

The only parts I was short of for this were the 14536 timer, used for the oddball bit-banged serial interface needed by the MIKBUG ROM, and the 6875 clock generator - which arrived in the post just now as I was going to take a photo, so that's now in the parts box! 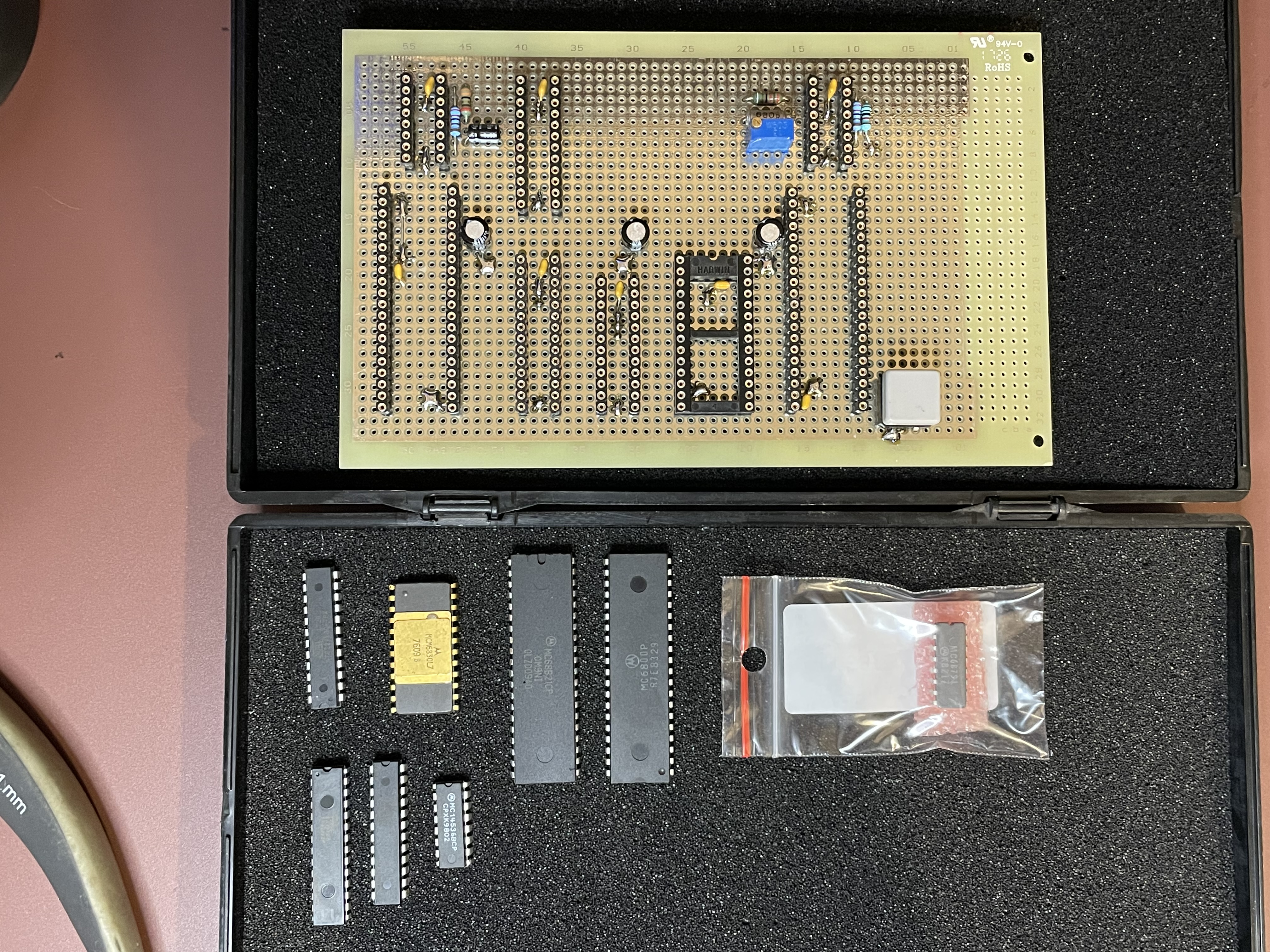 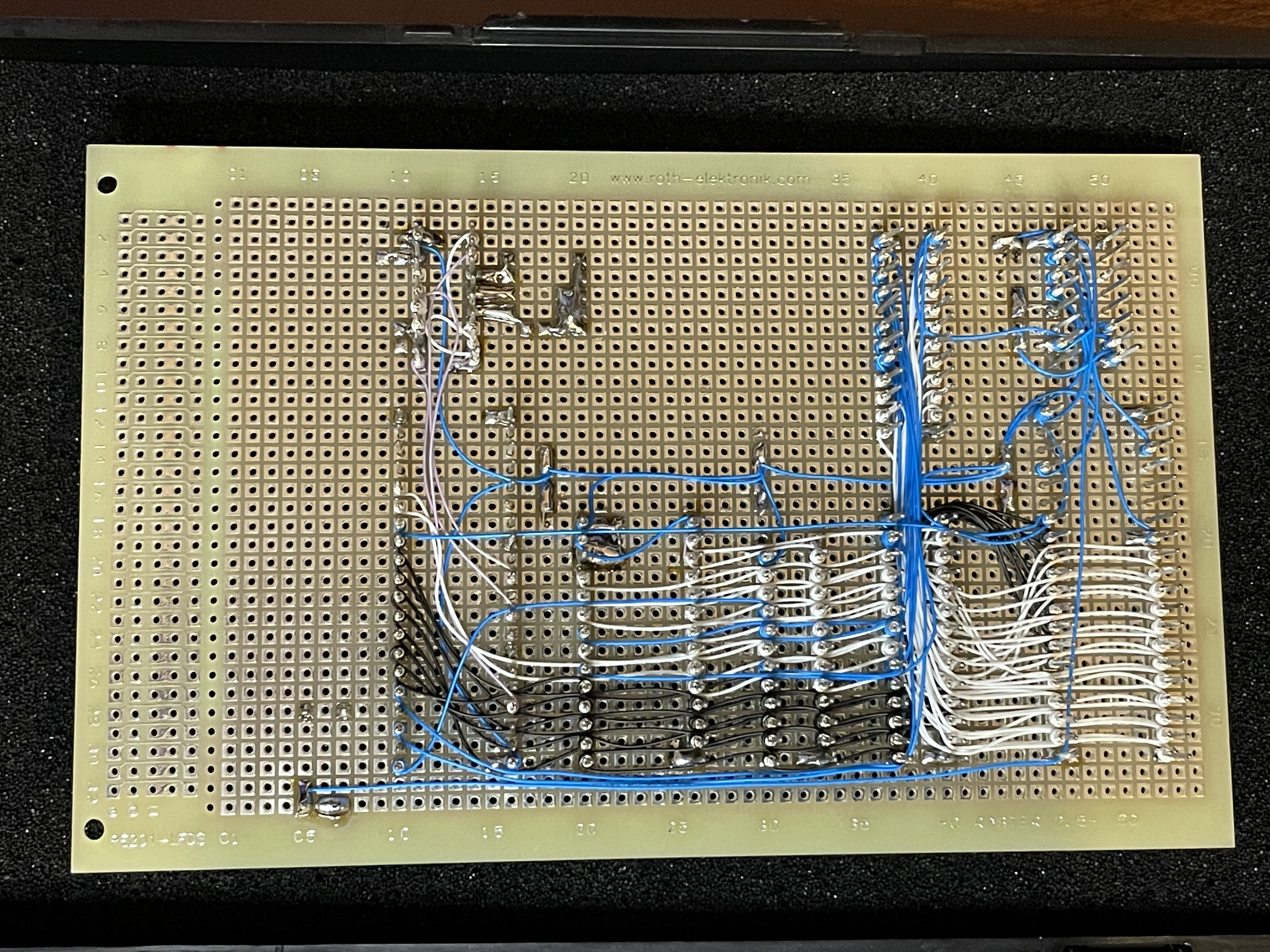 The other one is a much more complicated system, functionally like my second computer using a 6809 and running OS/9

This is still a multi-card rack system due to its complexity, even though it's now using modern RAM and GALs; the boards are CPU and RAM, Serial I/O and RTC (required for the OS), and a Floppy disc interface.
That is complex in itself, as it uses DMA to an onboard RAM.

I have all my original drawings, though converting from masses of TTL gates etc. to GALs is taking some time so still testing through this.

It has 1M RAM, the same as the original ended up with - though that was a separate board full of dynamic RAM ICs, whereas now it's just the two 32 pin ones on the CPU board.

I had to get rid of the original machines decades ago due to space and moving around in the early 80s (bedsit etc) but saved the important ICs, EPROMS and discs etc. 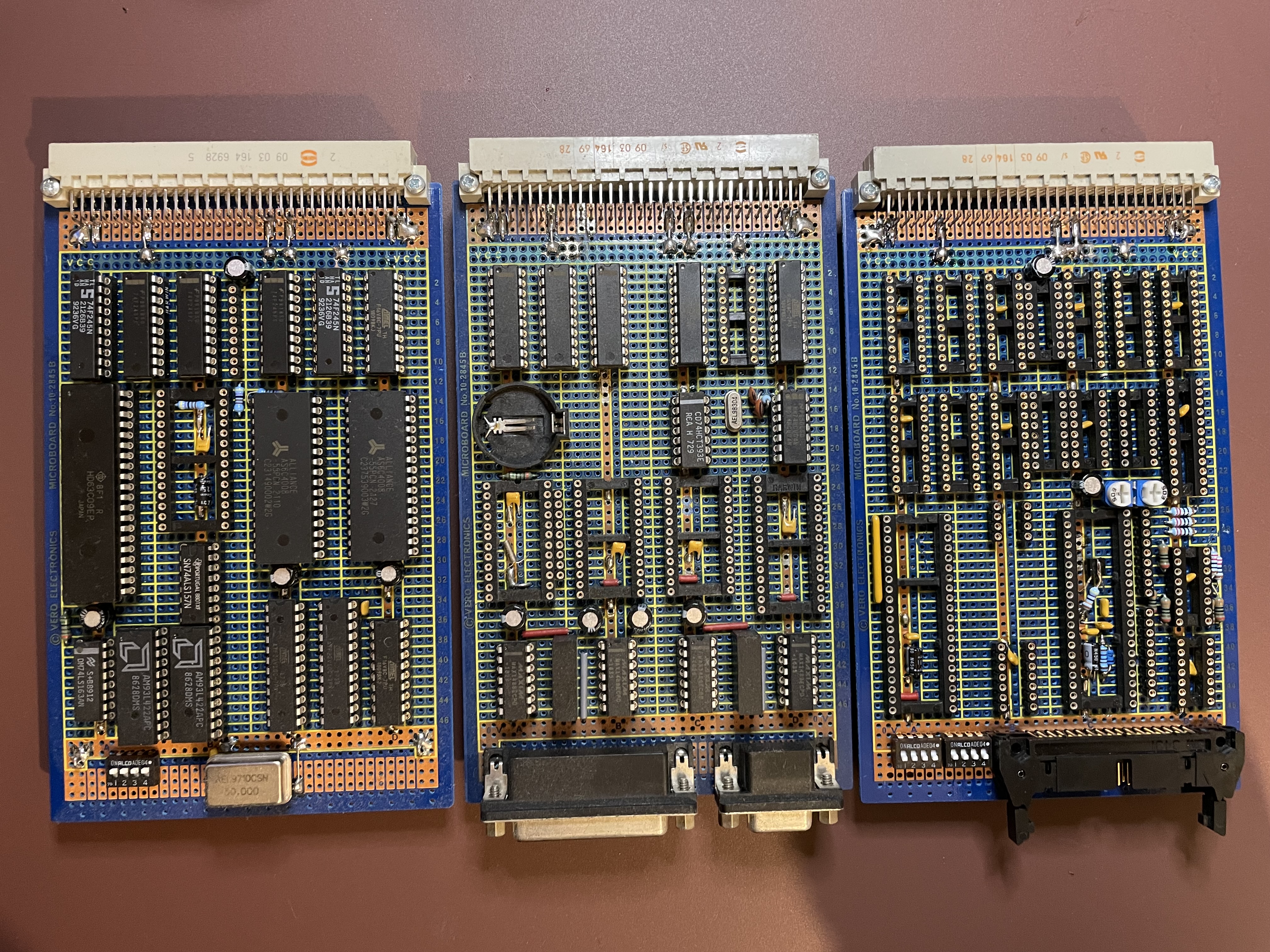 Most Helpful Member
My old Z80 parts were dumped or lost somewhere over the decades, as you see the RC2014 kits and boards helped start the project , Getting hold of some of the support ICs has been a little difficult , I don't usually get stuff off ebay but was the only place i could find some , 16C550 uart, TMS9918 , 82C55 . My picture shows a uveprom development ,so the Z80 can program its own firmwear ( with a little help from the PIC that runs a monitor program ) .
Upvote 0 Downvote

I built a modified version of Karen Orton's PICL project that emulates the SC/MP processor and includes National Semiconductors NIBL BASIC (see below).

I also designed an SBC for the RCA/Harris CDP1802 processor (see below).

I'm currently laying out a PCB for a Motorola MC6802 SBC (see below). This design is similar to Jeff Tranter's ET-3400A 'clone' without the keypad and display and using discrete 'glue' IC instead of a GAL.

And I just ordered PCBs for a 65C02 based SBC (see below) to demonstrate my microcontroller "blind interface" method. This SBC could be an economical alternative to the Ben Eater 6502 project. NO PROGRAMMER REQUIRED 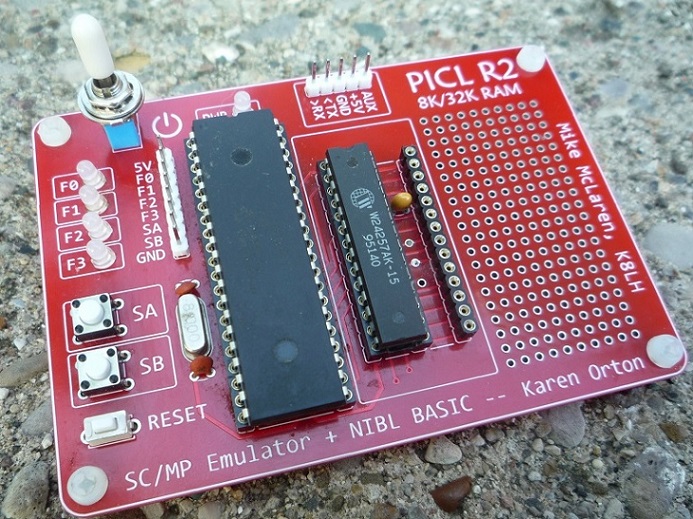 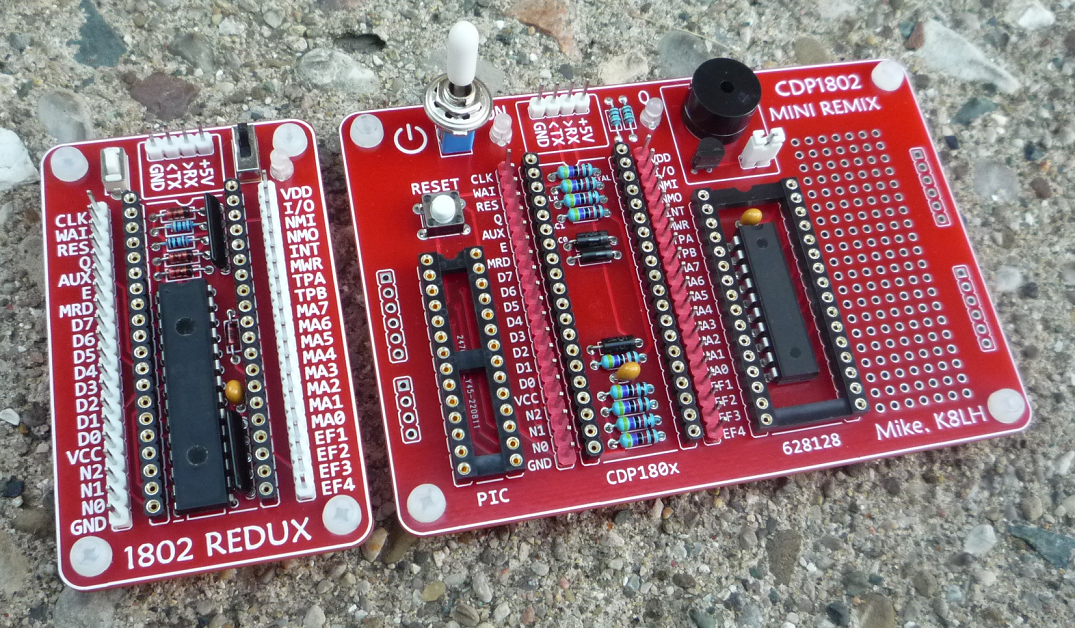 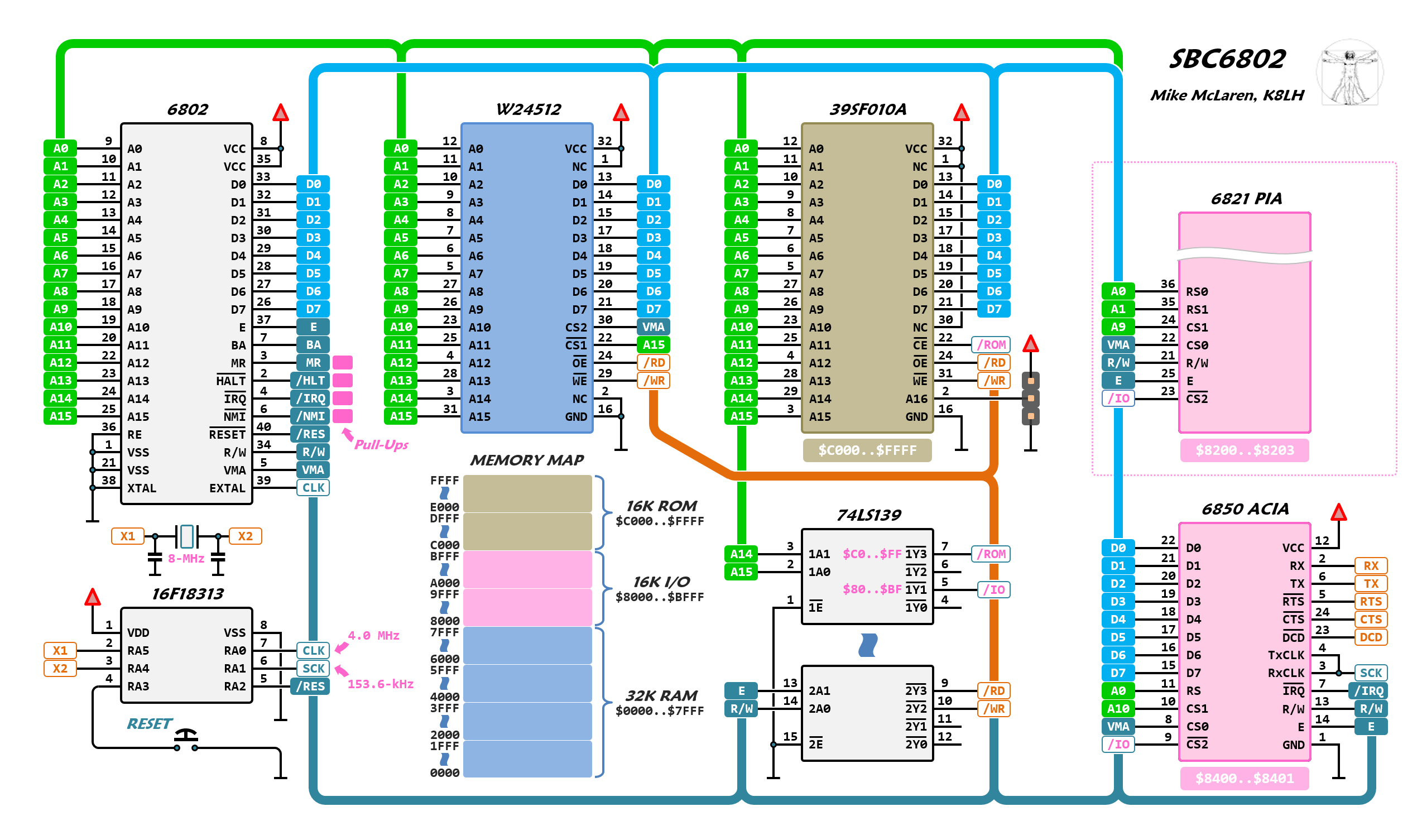 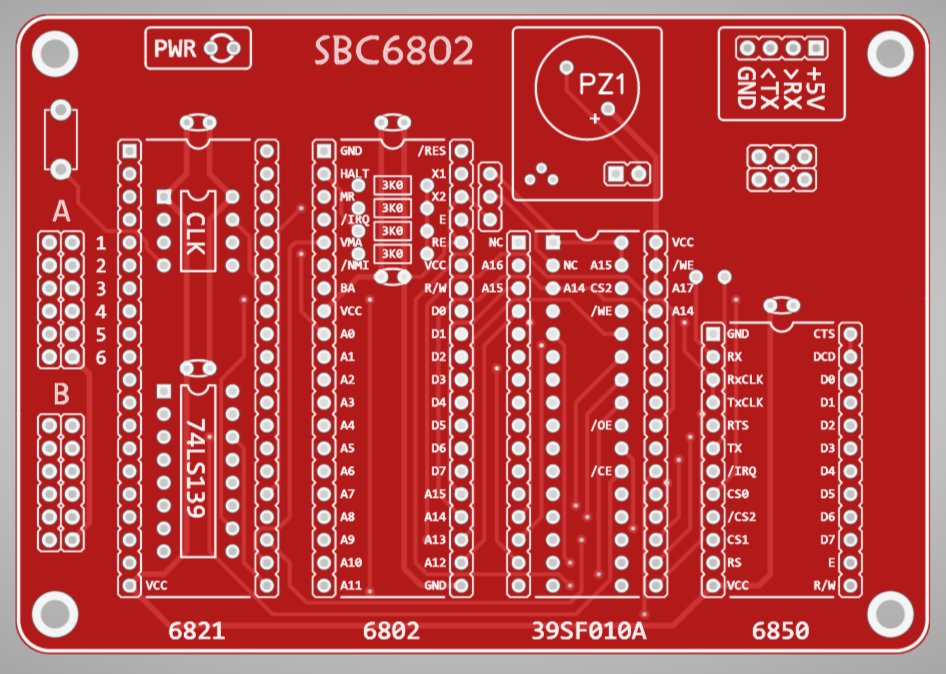 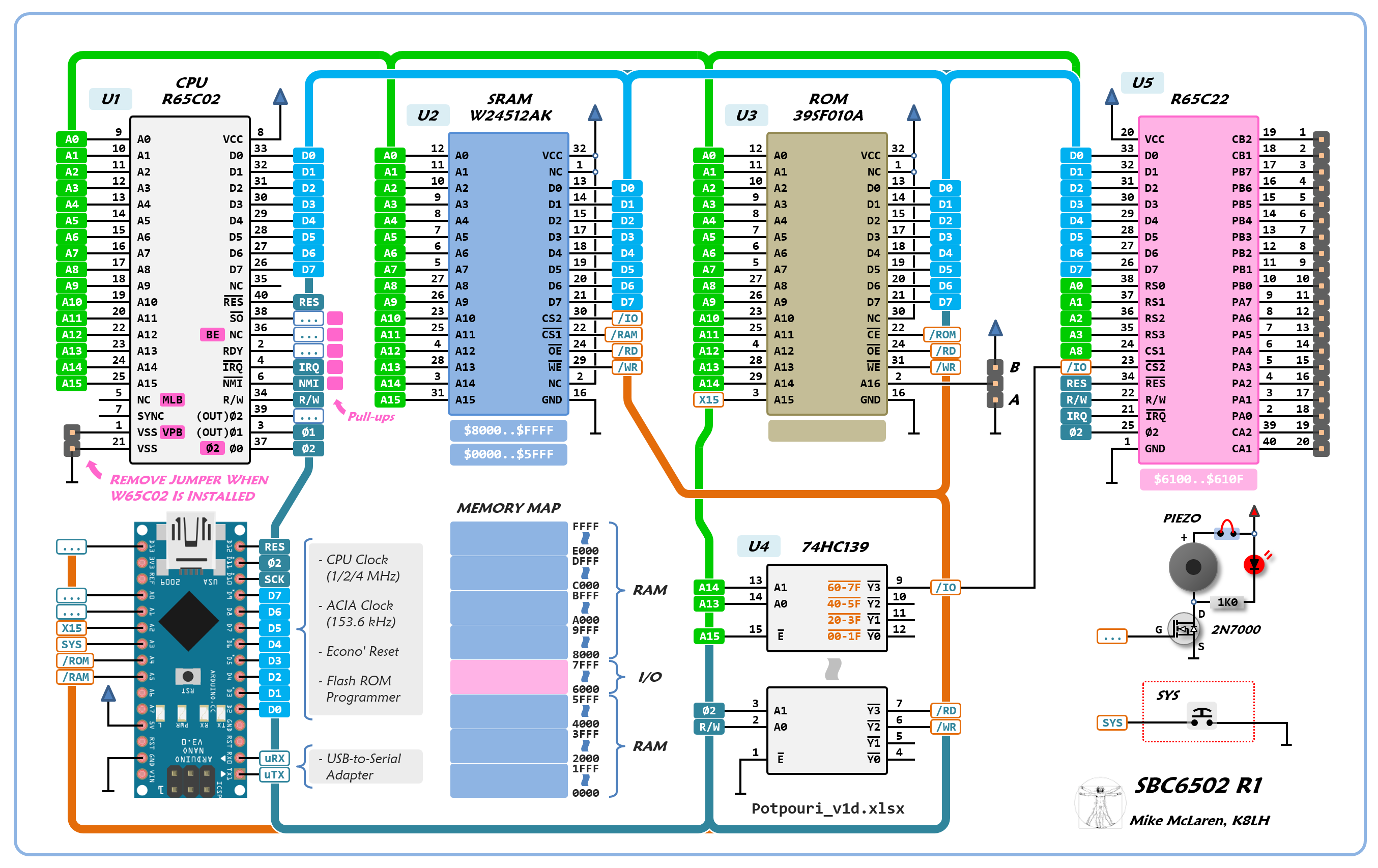 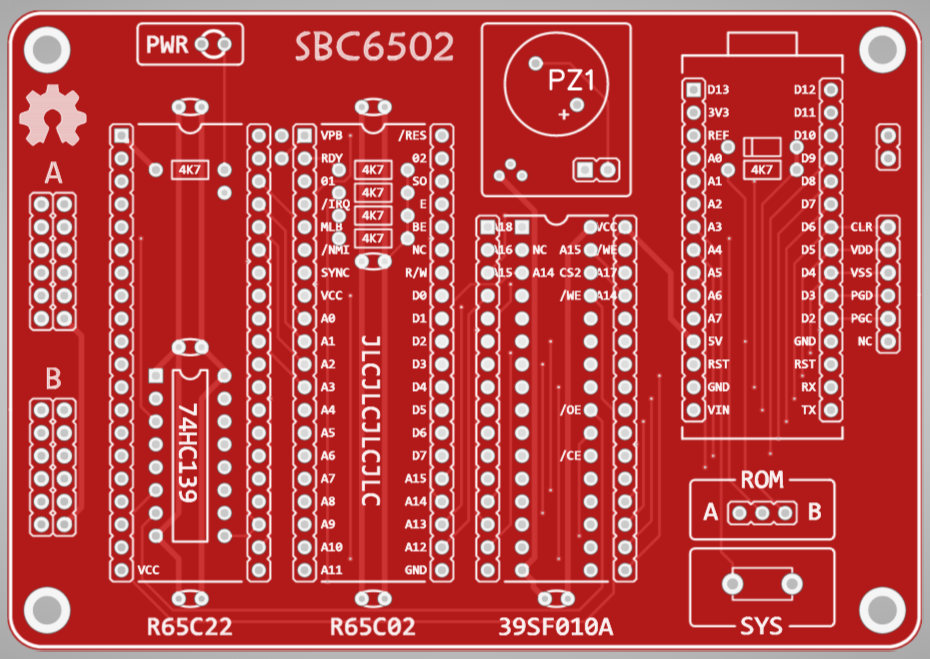 Mike - K8LH said:
I also designed an SBC for the RCA/Harris CDP1802 processor (see below).
Click to expand...

The 1802 was my first adventure into home brewed and etched SBC back in the late 70's , hours of fun ( probably too many hours )I had boot code entered by switches into a pair of battery backed 256 byte CMOS ram.
Upvote 0 Downvote

Most Helpful Member
Must admit, I've always fancied building a 6502 SBC, as 6502 is where I started - I still have my original 6502 machine (MicroTan 65 from Tangerine) - I've also still got a Commodore +4. However, every time I think of it common sense kicks in, a single cheap PIC (and almost no support components) can easily wipe the floor with a 6502, and provide vastly more facilities.
PIC programmer software, and PIC Tutorials at:
http://www.winpicprog.co.uk
Upvote 0 Downvote

I made a living for awhile writing 6502 code.

I started the 6502 project a couple weeks ago to present a reasonably economical alternative to Ben Eater's 6502 project for those "budget minded" hobbyists who might otherwise be priced out of Ben's kits. Why should someone have to spend $70 for an EPROM programmer for what might be a "one off" project? I'm not trying to diss' Ben. His videos are great and he's just making a living after all.
Upvote 0 Downvote

I started the 6502 project a couple weeks ago to present a reasonably economical alternative to Ben Eater's 6502 project for those "budget minded" hobbyists who might otherwise be priced out of Ben's kits. Why should someone have to spend $70 for an EPROM programmer for what might be a "one off" project. I'm not trying to diss' Ben. His videos are great and he's just making a living after all.
Click to expand...

Basically I had floppy disk drives, and wanted to run the games from those - not possible due to the copy protection.

The trick was to stop the program running when it had loaded, and then copy it to a disk file - later versions got more tricky, as they actually read program code from cassette to screen memory - so it corrupted the code if the screen changed in any way.

My solution was to copy the screen memory to high RAM - I was using a +4, most games were for the C16, so there was plenty of spare RAM to do that. My program then 'stitched' the copied screen code back to the rest of the code - and then just stored it as a disk file.

Took a bit of reverese engineering, and a bit of machine code, but I ended up with routines that would essentially copy a game from cassette to disk.
PIC programmer software, and PIC Tutorials at:
http://www.winpicprog.co.uk
Upvote 0 Downvote

If you're interested... here's how the 65C02 prototype turned out; 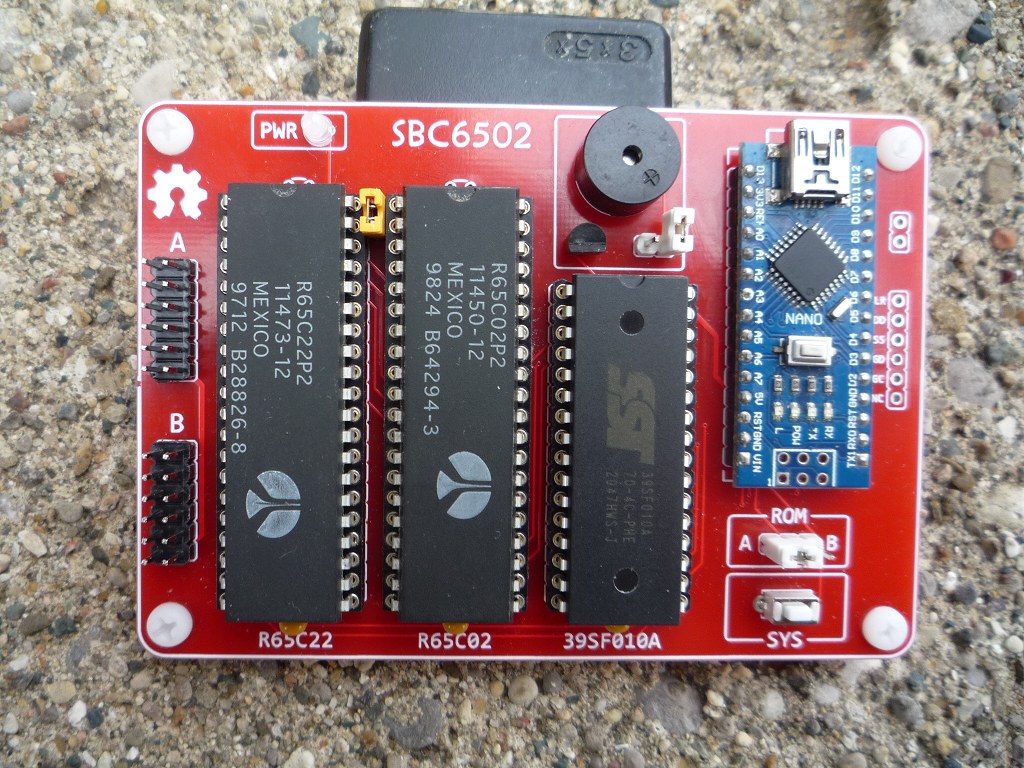 Mike - K8LH said:
I did lots of stuff like that, Nigel.

If you're interested... here's how the 65C02 prototype turned out;

I like the little beeper, is it a tone generator, or just a 'speaker', I've got a wide range of piezo's at work in my quest to find the loudest one
PIC programmer software, and PIC Tutorials at:
http://www.winpicprog.co.uk
Upvote 0 Downvote

I purchased a handful of Nano clones several years ago for $1.75 each, including shipping, and more recently for about $3 each. At that price it's easy to justify sticking one on a retro project PCB for nothing more than the built-in USB-to-Serial adapter. However, you may have noticed I also use it to provide the CPU clock (1, 2, 4, or 8 MHz), an "econo reset" function, and as an in-circuit EEPROM or Flash ROM programmer. Nano clones can still be had for around $5 today.

I don't have an Apple II anymore and I'd like to run Nick Gammon's G-Pascal on this little board.

The piezo speaker is quite loud when you drive it at its 2000-Hz resonant frequency.

Mike - K8LH said:
I don't have an Apple II anymore and I'd like to run Nick Gammon's G-Pascal on this little board.
Click to expand...

Mike - K8LH said:
I don't have an Apple II anymore and I'd like to run Nick Gammon's G-Pascal on this little board.
Click to expand...

Funny that.... I'm running an macintosh II via shapeshifter... Not sure id Apple II and Mac II are compatable.

I run PimGa2 on my pi4 and Mac II runs better than the original.. PimGa2 is free.. Pi4 is @ £40
I'd give my left arm to be ambidextrous
Nigel's tutorials in asm... http://www.winpicprog.co.uk/
Nigel's tutorials.. re-written in C. http://www.electro-tech-online.com/content/467-nigel-goodwin-s-tutorials-c.html
Upvote 0 Downvote
You must log in or register to reply here.

Decapped Chip On Board

C
LCD display on PICDEM 2 Plus board