For proper charging of lead-acid batteries a good technique is to start with a constant-current until the battery reaches a specific voltage, indicating it is near a full charge (≈90%), and then revert to a constant-voltage trickle charge mode at a lower voltage to avoid over-charge while topping off and then maintaining the battery charge.

Below is a variation on the familiar LM317 charger circuit to do that for small lead-acid batteries (up to about 1.2A charge current or 12Ah rating).
The LM317 initially operates in a constant-current mode until the maximum charge voltage is reached, as determined by the U2 pot setting.
A TL431 reference (U1) is used as a precision comparator to detect this voltage, at which point it turns on and latches by turning on Q1 and Q2.
Q2 then converts the LM317 into a constant voltage charger, with voltage determined by U4's setting. 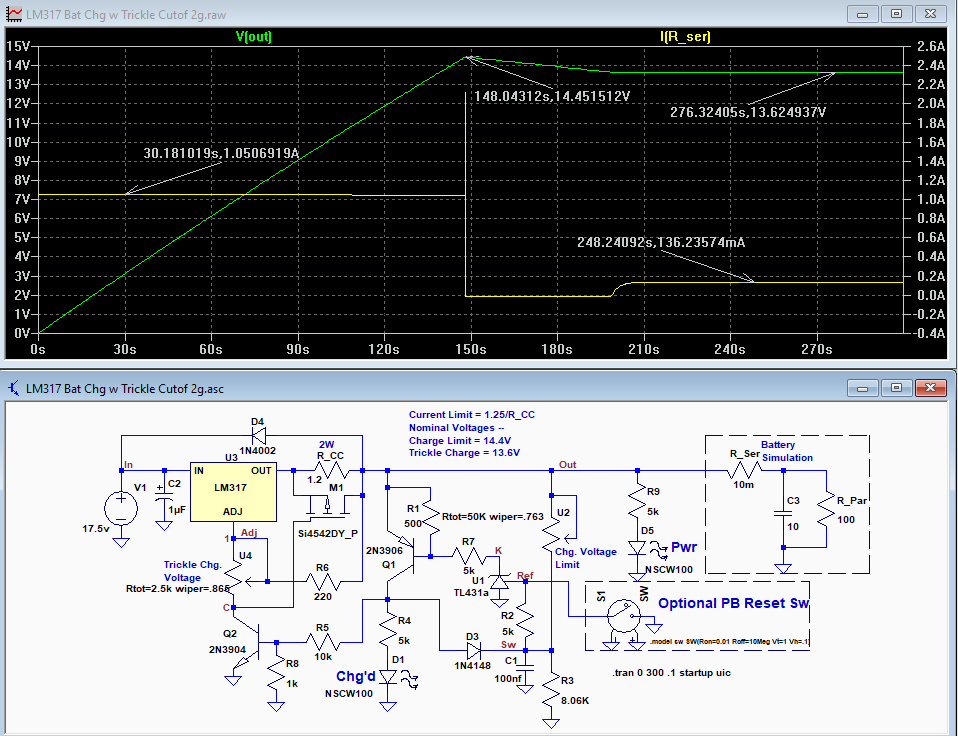 Upon power-up the circuit starts with Q1 and Q1 off.
This puts the LM317 into a constant-current mode with current equal to 1.25V/Rcc.
When the voltage at the junction of pot U2 and R3 reaches 2.5V [corresponding to a battery voltage V(Out) of 14.4V for the shown pot setting] the TL431 starts to turn on and its cathode voltage drops.
This turns on Q1 and the positive feedback from its collector through D3 further turns on the TL431, resulting in a latched condition.

The charge voltage trip point and trickle charge voltages are typical values for a 12.6V lead acid battery.
These can be independently adjusted as needed for a particular battery or charging conditions.

LED D5 indicates the circuit is powered and LED D1 indicates it's in the trickle charge mode.

To reset it back to the charge mode from the trickle mode you can either remove power or press reset switch S1.

The input voltage should be ≥17.5V (Vin at least 3V greater than the maximum Vout) to allow enough voltage headroom for the LM317 to provide full charge current up to the maximum battery voltage.
Except for low maximum charge current, the LM317 will need to be on a heatsink since it will dissipate [V(in)-V(out)] * I(out) watts.
Reactions: Eugen Enache, Recklesrog and ugura09