How come there's current through the line, in steady state (t->∞) ? 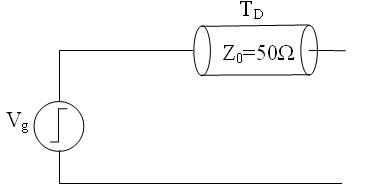 I see, thank you very much for your great answer.

I was hoping that you could give me some guide lines regarding analysing the next circuit (i'm new to this material).

My question is this:
At t=Td=2nsec (The Td of the left transmission line), the wave hits R1 - one part this wave withdraws back to the generator, and I dont know what happens to its second part which doesnt withdraw.

Thank you very much again.
Regards.

I'm a bit rusty with this sort of theory, but I believe it would go like this...the power that couples into the first transmission line travels along until it hits R1. At that point some current would flow in R1, equal to the instantaneous voltage at the point divided by R1, and so some power would be dissipated as heat in R1. Some power would also flow down the second line. The amount of power that launches down this line will be a function of the instantaneous voltage across R1, divided by the characteristic impedance of the second line. After 1 nSec, the power hits R2 where some is absorbed (again, a function of instantaneous V (squared) divided by R2. Because there is a mismatch between the value of R2 and the characteristic impedance of the second line, some power is reflected back down the second line to R1. At R1, the same sort of thing happens in reverse. some of this reflected energy is disappated in R1, some continues to travel towards the generator and some is re-reflected back to R2.

At any point where you have an impedance mismatch, some power goes into the load and some power is reflected back to the source. The "load" in the case of this sort of problem consists of the resistance at that point in parallel with the thevenin equivalent impedance of the next loop to the right, in parallel with that resistor. However, since we are dealing here with a wavefront resulting from a step or non-continuous change in the source voltage (like a pulse for example), the thevenin equivalent impedance of the second loop depends on time. At t=2nSec, the impedance looking into the second loop appears to be just the characteristic impedance of the second tx line. I think.

I'm more used to steady state AC circuits and in those types the circuit could be reduced using thevenin's theorem, so that the second loop is simply a lumped impedance in parallel with R1 and from that it is easy to calculate the effect of current in the first loop. But in this example, where we have a single change in DC level we have to look at things varying with time and in that case, I think my approach above is correct.
RadioRon
A

Wow, you help me out so much.
I dont know how i can thank you

Thank you very much for all your help!

Hey,
I gave some thought about it and was wondering, is there a possible way to measure that AC current that flows in the transmission line?

Yes indeed. You can do this with an RF current meter or RF current probe on some transmission lines (like balanced open wire lines). With coaxial transmission lines it is a bit more difficult and I'm not sure how it would be done. It is quite common to measure power flow in coaxial lines and if you also measure voltage with a voltage probe then current can be calculated.
RadioRon
A

Thanks a lot man!

B
delay line memories and sram