Hi,
Please help me with the question below about transit frequency of common source amplifier? I attached the article below.
I thought that the author assumed that Cgs >> CL but that doesn't seem appropriate in reality. Is it right?
Edit:
Well, I think that the article is wrong here.
Here CL >> Cgs and so that ft = gm/2*pi*CL.
Hope I am getting it correct here!
Thank you! 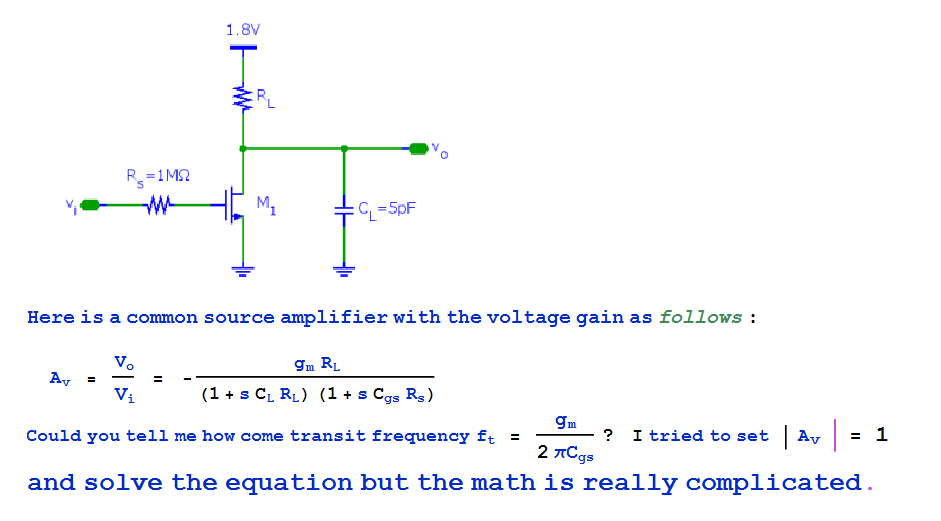 What is your motivation for trying to solve for "ft" from the transfer equation for the amplifier?

This "ft" is an intrinsic property of the transistor alone, not the whole circuit.

I might also add that the Miller Effect can have much significance too on this calculation so the Cgd capacitance would also be included in a more accurate calculation:
ft=gm/(2*pi*(Cgs+Cgd))
Last edited: Jul 6, 2014
One test is worth a thousand expert opinions, but one expert specification is worth a thousand tests.
Mathematics is the shortcut to understanding nature.
If i miss something you posted or something you think is important, feel free to PM me.
A

Thank you very much, MrAl.
I read that transit frequency is the frequency at which the voltage gain is equal to unity. So, I set up the voltage expression and tried to solve that equation.
I am learning to size components for that amplifier using gm/id method and the expression of ft came up.
According to your post, ft is the frequency at which the current gain is equal to unity.
Is the definition above relating to voltage gain wrong?
Does the current gain = 1 means voltage gain is also equal to 1?
I know only one thing - that is that I know nothing.
M

But the "ft" you need to use in your application is the one we already solved for, and isnt it interesting that it came out to the very right formula? That's because this "ft" is a property of the TRANSISTOR alone, not the CIRCUIT. You use that "ft" in part in order to determine what transistor you need to meet the specs of the entire circuit according to some design methodology where it is assumed that following the procedure outlined will result in a circuit that is either spot on or is close to the design specification goals.
One test is worth a thousand expert opinions, but one expert specification is worth a thousand tests.
Mathematics is the shortcut to understanding nature.
If i miss something you posted or something you think is important, feel free to PM me.
A

I know only one thing - that is that I know nothing.
M

Well as i said when i hear "transit" or "transition" frequency i think of a single device like a transistor, not an op amp circuit or any other entire circuit made of various components that could include any number of transistors. This is like a specification that we can use to help select a component.
For example, if i told you i had two NPN transistors, one with ft=10MHz and one with ft=250MHz, and you wanted to build an amplifier with a current gain of just 2 at 10Mhz (the amplifier is the whole circuit that includes the one transistor). which transistor would you want me to give you? Since the ft indicates the frequency where we get a current gain of 1, there would be no way you could use the ft=10MHz unit, so you'd be forced to use the 250MHz unit. That way you know you should be able to get a gain of 2 at 10MHz (because most likely that if it has a gain of 1 at 250Mhz it can probably do a gain of 2 at 10MHz easy).
So you pick a transistor based on ft, and knowing how it works into the circuit (your other questions now) you can figure out if it will work in your circuit if you are using that kind of design method.

The "unity gain frequency" can be specified in different ways depending on what we are doing or analyzing. For the transistor it was specified as w=gm/Cgs, but for an entire circuit it could involve many more factors. I gave you the example of the circuit we had looked at with the single transistor and you could see that it involved other components like RL. That's because we wanted to know what the unity gain frequency was for a VOLTAGE gain of 1 fo r the whole circuit as opposed to the CURRENT gain of the transistor alone. So in one case we wanted the current gain, the other case a voltage gain, and one was for a single electronic component and the other for an entire circuit using a few components.

This unity gain frequency thing comes up a lot in electronics and it means different things sometimes. We also see the "3db" frequency come up a lot in filters too a lot. This is the point where the gain drops by -3db from the passband gain (or 1/sqrt(2) times the passband gain). These are "metrics" that we use very often in order to make designing something a little easier because it gives us comparative method tools for choosing components and circuit topologies.
One test is worth a thousand expert opinions, but one expert specification is worth a thousand tests.
Mathematics is the shortcut to understanding nature.
If i miss something you posted or something you think is important, feel free to PM me.
A

I understand the concept now. However, I need to figure out what is used in op amp design using gm/id methodology, transit frequency ft or unity gain frequency fu.
Do you use gm/id methodology for sizing component?
I know only one thing - that is that I know nothing.
M

I am not sure i understand your question because transit frequency is the unity gain frequency for the MOSFET. Maybe you can elaborate.

I do not use the techniques you are talking about because i dont have to design high frequency MOSFET amplifiers
However, from the paper it appears that they want you to choose the ft from the min ft because the min ft leads to the max efficiency. The equation they give is:
ftMin=gmMin/(2*pi*CgsMax)

and CgsMax is because when Cgs is the maximum allowable we get the highest efficiency.
You would then refer to the chart to find the gm/id and then go from there.
Try that and see what you can come up with.
One test is worth a thousand expert opinions, but one expert specification is worth a thousand tests.
Mathematics is the shortcut to understanding nature.
If i miss something you posted or something you think is important, feel free to PM me.

Aug 2, 2013
anhnha
A
A
How to adjust resonant frequency equals to operating frequency of circuit?

Aug 4, 2013
MrAl
M
A
Dc and ac resistances of an ideal current source

Sep 14, 2013
MrAl
M
A
What are the functions of Input Network in power amplifier?