Can someone please explain the voodoo of the transistor as a switch. I have a TIP122 Darlington pair transistor that I am trying to use to apply 9V to a load when I apply 5V to the base. I currently have it so that 9V is connected to the Collector, middle pin. The emitter is connected to the + side of an LED. This then goes thru a resistor to ground. I have a 5v switched power supply connected with the + lead connected to the base and the - lead connected to ground. This is on a project board so the ground rail for the 9V power and the 5V power are the same. When I turn on the 5v power supply, the LED lights up but there are only 5V going thru it. What happened to the 9V?

Most Helpful Member
You built an emitter follower. The emitter can never get any higher than base minus 2Vbe drops.

Ground the emitter, drive the base with-respect-to (WRT) to ground through a current-limiting resistor, and connect the load between collector and the positive side of the 9V supply. Ground the minus end of the 9V supply. That is an common-emitter amplifier.
Last edited: Jun 5, 2009
I am an engineer and an academic. When I talk about current it flows from positive to negative.
Most of the circuits I post have been simulated with LTSpice. You should breadboard them. If I post
a picture that is too small, click on it, and it will open full size.

First, you didn't say what the value of the current-limiting resistor on the LED is. I'm guessing something like 470Ω. You also didn't mention the forward voltage or current requirement of the LED so I'm guessing bog-standard regular old red LED.

Before doing anything else, put a resistor (1K should do it) between the base of the transistor and the 5V power supply to limit the current to the transistor. Honestly your TIP122 might not need it but it's a good idea anyway. (By the way, the TIP122--is that something you are using just because it was lying around? It'll work but it's serious overkill for an LED.)

Next put the LED and its current-limiting resistor between the transistor's collector and the 9V supply, not ground. Ground the emitter instead. (You have the transistor upside down.) 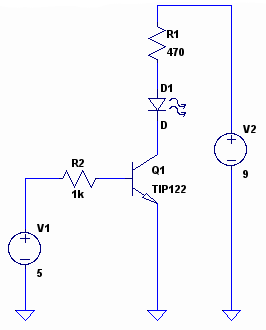 For more reading, pages 62-64 in the Art of Electronics are an excellent introduction.

The connection to an LED is solely for proof of concept. I am actually going to be driving ten of these with an Arduino to turn things on and off. The Arduino will not pass enough current so I am using the transistors as a relay. Does this change anything about the suggestions above?

EDIT: OK, I changed things around according to Torben's drawing. I also replaced the LED and resistor with a christmas light bulb. It is obvious when it gets 9v instead of 5v. It looks like everything is working now. Thanks for the help. I didn't realize that the transistor needed to act like a switch the ground instead of the positive.
Last edited: Jun 6, 2009
S

Well, you should be fine with darlingtons because of their high gain, but keep in mind that BJTs do draw significantly more base current than MOSFETs draw gate current.

If you have high current demands on the darlington outputs (like, lots of LEDs in parallel on one transistor), then if the hfe of the transistor is low, you might draw some base current. driving lots of these bases could exceed the total current output limits of your arduino. however I think youll be fine. especially with the current-limiting resistor on the base - that way if it starts to draw lots of current into the base, the voltage at the base will be lower and start to turn the transistor off.

Purpose of rating 120MHz to the "audio" transistor?