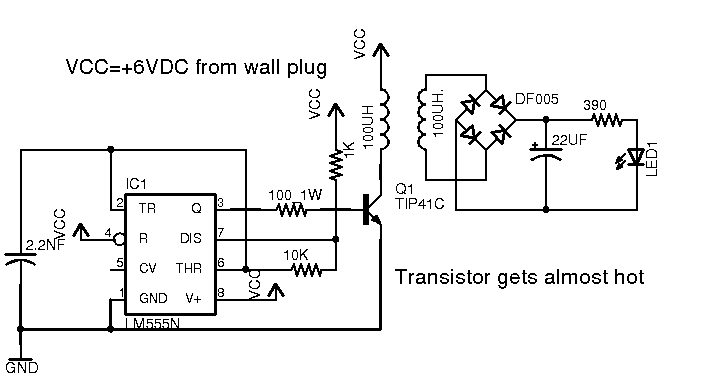 I borrowed the idea to make this kind of circuit from: https://www.theorycircuit.com/wireless-power-light-array-using-ic555/

Because I didn't have the exact parts on hand, I made some substitutions. For the timer capacitor I used 2.2nF instead of 3.3nF because faster I think means more stability when it comes to power transfer.

I didn't have an SL100 transistor available, and another source advertising the same kind of circuit suggested I can use any power transistor so I opted for a TIP41C.

I wasn't sure exactly the value of the inductor to use so I tried 100uH for each inductor.

Also, I upped the source voltage to 6V instead of 3V because I needed to transfer more power wirelessly. Later I may switch it to 12V but I won't until I figure out what is going on.

Other than that, everything else is the same.

I applied power to the circuit and had the two inductors almost touching each other, and the LED did not respond at all. Also, I smelled something unusual, so I checked out all components on the circuit and noticed the TIP41C was getting very warm (almost hot), but then it cooled down right after I removed the power.

Is this normal or do I need a better transistor than a TIP41C or is the whole circuit a complete joke or is my inductor value way off? I'm lost.

Most Helpful Member
One transistor is 0.5A and the other is 6A. So not close.
I think you don't need the 390 ohm resistor.
Do you have the two 100uH inductors very close together?
M

When I did the test the inductors were at most 5mm away from each other. And as for transistor are you saying mine is rated for 6A while the one in the web schematic is rated for 0.5A? So I guess I can ignore the smell and ignore the transistor heat?

Also, I used the resistor because I didn't want to blow up the LED from excessive current

mik3ca said:
Also, I used the resistor because I didn't want to blow up the LED from excessive current
Click to expand...

I don't think you can make that much current. (try shorting out the resistor) Either there is LED light or not and you can find out in a fraction of a second.

mik3ca said:
So I guess I can ignore the smell and ignore the transistor heat?
Click to expand...

Smell......? It may be the wire in the inductor is too hot. Is it hot?
Is the transistor too hot to touch? 50C is OK but don't push it much higher.
It may be that the transistor is turned on and never turns off.
Can you measure the total current?

Most Helpful Member
The 100uH inductor is simply a short piece of wire since it saturates with the very high current and the fairly low frequency. If it is 10mH and has an iron core then it can transfer power to the nearby receiving 10mH inductor that also has an iron core.
Uncle $crooge
M

Actually before trying again, should I increase the inductor value first? I'm currently using inductors similar to this one in appearance:

If its the inductor then I guess I'll need to order powerful inductors. Until I own some could I get away with thick wire with many turns as a temporary solution?
M

Oh. wait I think audioguru just answered some of my question. Ok, I'll have to order a larger inductor. The biggest I have on hand is 1mH but he suggests 10mH+

Most Helpful Member
Your inductor is like the low current ones in my solar garden lights. Its maximum allowed current is much too low for your circuit so it saturates and is simply a short piece of wire.
If you make inductors without an iron core then the power transferred will be very low unless you use a VHF radio frequency (not from a 555 timer).
Uncle $crooge
M

Ok, I'm looking on ebay right now and I already designed my PCB to fit axial based inductors. I found the same style that is rated for 1W but I also found ones that look like a cross between a resistor and a capacitor. 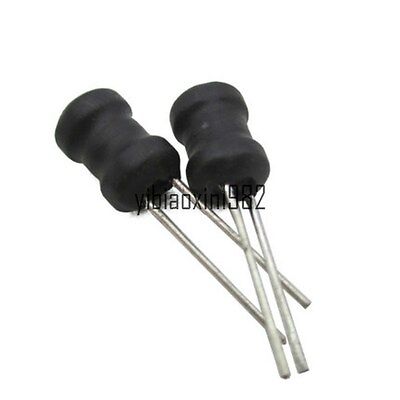 Is a 1 watt rating good enough? I'm just wondering if theres some math I can use? I mean with resistors, I can determine wattage requirements with ohms law but I think with inductors its a bit different.
M

I also fond inductors made with toroid cores with an actual mohm resistance value. I'm better to get them and sprinkle on some ferrite of some sorts on them because at least with a resistance value I can determine what transistor I need.

Most Helpful Member
I don't think you have much of a clue what you're doing?.

The coils aren't RF chokes, they are specifically wound coils designed to transfer power to each other as efficiently as possible - basically it's the primary and secondary of a transformer.

Using chokes isn't going to work well at all, not that the correct coils are terribly efficient anyway.

I've just checked the original link you posted, and that clearly explains how to wind the coils.
PIC programmer software, and PIC Tutorials at:
http://www.winpicprog.co.uk
M

I want to avoid manually wiring the coils. Also doing it manually will take a while especially if I wind the wire around a toroid core.

Could I get away with using a 600ohm:600ohm transformer and connecting the primary and secondary side together in series along with a lower rated transistor? I remember back in the day working on an electronics kit where a transformer was used to deliver power from the rest of the circuit to a speaker.

Most Helpful Member
Why do you buy cheeep Chinese junk from ebay? Ebay knows nothing about electronics and has poor Engrish. What is the saturation current for those inductors? What is their resistance? Ebay does not know and neither do we.

The transistor is not driving a high current into the very low resistance of an inductor, instead its is driving the reactance of the coupled coils. The frequency, inductance and amount of coupling between the coils determines how much signal is coupled. The transmitting coil must produce a magnetic field that is past to the other coil but your coils produce an internal magnetic field with a very small external field.
Uncle $crooge
M 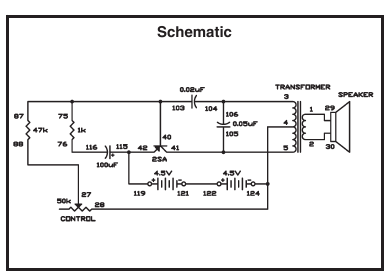 I found this circuit as the first one from a 130-in 1 electronics project kit. It uses a transformer to pass sound to a speaker. Couldn't I somehow use the same concept for wireless power transfer?
M

audioguru said:
Why do you buy cheeep Chinese junk from ebay?
Click to expand...

I can't say its all "cheeeep". I recently bought a 16 character by 4 line display from them and it worked like a charm.

Ebay knows nothing about electronics and has poor Engrish. What is the saturation current for those inductors? What is their resistance? Ebay does not know and neither do we.
Click to expand...

This is whats interesting. The inductors with wire wound around a toroid core had their resistance indicated (about 1/2 ohm for 3mH inductor). Some other inductors have a mA rating, and there were others that had wattage ratings. I even spotted a 10mH one that was axial that has a 1W rating. When I looked up transformers, their resistance values looked more promising (600+ ohms per winding) but would such a high ohm figure actually work?

The transistor is not driving a high current into the very low resistance of an inductor, instead its is driving the reactance of the coupled coils.
Click to expand...

Oh. so if I take an inductor value and frequency of the 555 and calculate the reactance, then I can use that value as the inductor resistance and then calculate amps and watts from there?

but your coils produce an internal magnetic field with a very small external field.
Click to expand...

Ok, so does this mean I should get torroid core inductors or a transformer, or do I just need a larger value inductor?

mik3ca said:
so does this mean I should get torroid core inductors or a transformer
Click to expand...

One thing that you don't want is a toroid core for the inductor.

Toroids have very low leakage flux, use a toroid and the circuit is guaranteed NOT to work.

Happily retired and playing with my big boys toys every day.
M

This is odd. (I guess this is where audioguru has a point) I type in "wire wound inductors" on ebay and most of the results are the inductors with wire around a torroid core. Then there's tesla coils that cost a high amount.

Now I'm confused, one thinks wire-wound coils is best while another thinks an iron core is best.

mik3ca said:
I type in "wire wound inductors" on ebay and most of the results are the inductors with wire around a torroid core.
Click to expand...

Just because an ebay search finds wire on a toroid core, that does not mean that they are the only types of inductor.


mik3ca said:
Now I'm confused, one thinks wire-wound coils is best while another thinks an iron core is best.
Click to expand...

What are you really trying to do?
Does this thing have a practical application, or is it just a learning exercise?
Iron core, or air core, there is more than one way to skin a cat*.

* No animals were harmed in the use of this metaphor.
Experience is directly proportional to the value of the equipment ruined.

mik3ca said:
I also fond inductors made with toroid cores with an actual mohm resistance value.
Click to expand...

No!
Toroid cores are made to not radiate. Two toroid coils should not talk to each other.
M

What are you really trying to do?
Click to expand...

In the end I want to create an 8VDC power supply through wireless means so that I can make a wireless charger that charges two phone batteries (that total 7.2V) but the problem is transferring the power from source to destination.

Any suggestions for this wireless circuit