So this is a circuit of a charge regulator for solar panels. the aim is to charge the battery with 14V then 13V after a moment before its totaly charged. To do so we will need the PWM of arduino to open the MOSFET when the voltae of solar pannel is higer then the battery's then when its opposite arduino shut down the mosfet. the zener diode is here to limit the voltage to 15V.

so what do you think ? is there something to correct ?

Most Helpful Member
Q1 does not work like that.
D1 subtracts 15 volts form the panel. Result is a 2 volts.
If the battery is dead then the Arduino will not start and turn on Q1.

What panel are you using?
Is the 17 volt MPP or max voltage?

Most Helpful Member
The N-channel Mosfet Q1 is connected as a follower. Then its gate must be 10V higher than its source. The gate must be about +24.6V which is impossible Arduino.
The 15V/17mA zener diode D1 will blow up with charging current. But since its voltage is 15V then the battery will get only about 1.3V and it will not charge.
Uncle $crooge

17 V is the maximum voltage.
i thought that the zener diode is here to limit the voltage at 15v not subtracting no ?
can anybody please please please correct it for me ?

Most Helpful Member
You could use a relay to open and close the connection to the solar panel. No not need to use a PWM pin. Can use any output pin.
Remove the Zener.
When the battery is charging the solar voltage is 0.7 volts larger than the battery voltage. (relay closed)

Most Helpful Member
If you put the Zener from + to - on the solar panel it will limit the voltage. (not a good idea)

Most Helpful Member
The easiest way of charging a 12V Lead-Acid Battery from a 17 to 21Vopen-circuit solar panel is to use a low-impedance switch (FET or Relay) that is fully-on or fully-off. Close the switch when the battery voltage drops (due to load or self-discharge) below ~13.5V, and open the switch when the battery voltage climbs above ~14.4V. You don't need a Zener in the path between the panel and the battery.

This means the Arduino needs to measure the battery voltage directly on the downstream side of the switch. The Arduino can turn the switch on/off. However, you really don't need an Arduino. I have built several chargers like this using just a 555 (used as a window comparitor) and a TL431 voltage reference (Cost ~ $2).

Since the solar panel behaves like a constant-current source while its terminal voltage is between ~10V and it's open-circuit Voltage, the battery charging current is whatever the panel will deliver based on the solar flux landing on it. Current limiting is intrinsic in the panel.

Is your battery a flooded battery, or sealed AGM type? That affects the cut-in and cut-out voltages a bit. The cut-in and cut-out voltages should be compensated for ambient temperature, too.
Last edited: Sep 19, 2017
I am an engineer and an academic. When I talk about current it flows from positive to negative.
Most of the circuits I post have been simulated with LTSpice. You should breadboard them. If I post
a picture that is too small, click on it, and it will open full size.
S

My Arduino PWM solar charger is based on **broken link removed** design.
Also have a look here

Don’t argue with idiots.......they will drag you down to their level and then beat you with experience!

What useful purpose do the Schottky diodes D6, D8, D9 serve? (hint, they do nothing, generate heat, and then they need the stupid cooling fan).

What useful purpose does controlling Q4 with 500Hz PWM serve? (hint, what difference is there if Q4 gets turned on 500 times a second or twice per hour? Does the battery care? Does the panel care?)
Last edited: Sep 20, 2017
I am an engineer and an academic. When I talk about current it flows from positive to negative.
Most of the circuits I post have been simulated with LTSpice. You should breadboard them. If I post
a picture that is too small, click on it, and it will open full size.

My solar controller build from stuff taken / modified from the web... has charge / discharge current measurement , a work in progress ..... 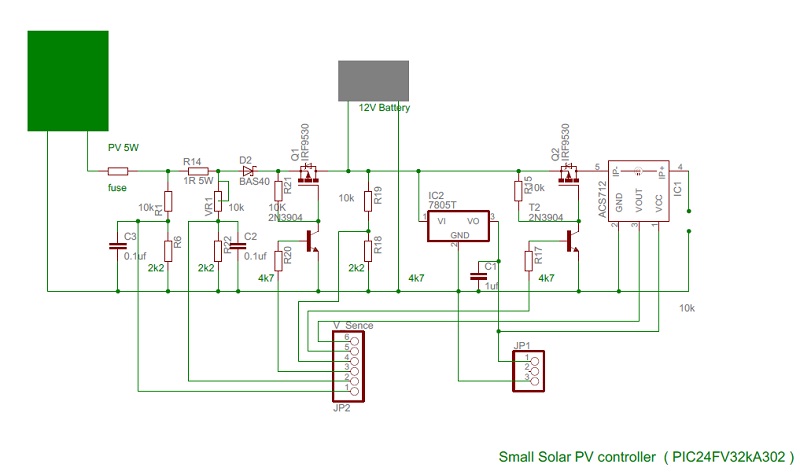 Most Helpful Member
The first circuit in this thread does not work because it is missing the charge pump parts that develop the high voltage drive to the gate of the N-channel Mosfet.
Uncle $crooge

those are informations about my solar pannel 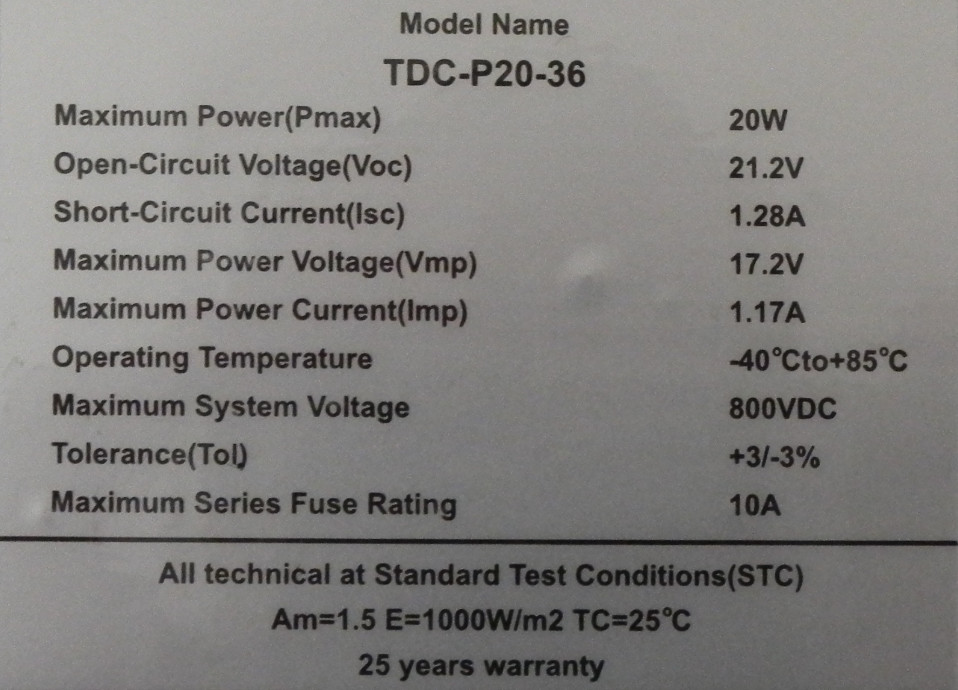 the diode is here to avoid the curent reverse

i decide to use the mosfet because it doesnt consume current power to be controled not like the relay. the way i am puting the MOSFET seems correct for me because it works in my software simulation and with a limit of 5V arduino pin it can close and open the mosfet

i just deleted the zener and moved the diode D2. how about this now ? is there some mistakes to correct ?

Most Helpful Member
What problem is solved by diode D2?

You do not have a 17V panel; you have a panel which is 21.2V if it is in bright sun, and no current is being drawn from it. Under load, the panel voltage can be anything between 0V (if short-circuited), equal to the battery voltage (if connected direct to the battery through zero Ohms), or higher than the battery voltage if there is a series impedance (like D2).

The Arduino is a bad choice for this controller. It draws > 50 ma from the battery just to measure the panel voltage to see if it is time to turn on the switch? Horribly inefficient.
Last edited: Sep 20, 2017
I am an engineer and an academic. When I talk about current it flows from positive to negative.
Most of the circuits I post have been simulated with LTSpice. You should breadboard them. If I post
a picture that is too small, click on it, and it will open full size.

Most Helpful Member
Your circuit is missing the charge pump parts (in the circuits you copied) that boost the PWM voltage from the Arduino to the gate of the Mosfet to about +25V so that the Mosfet can turn on.
Or you can use a P-channel Mosfet that is not a follower as shown in posts #11 and #15.
Uncle $crooge

MikeMl said:
What problem is solved by diode D2?
Click to expand...

Accidental reverse connection of the PV panel.... possibly better placed before the voltage sense ?
Not got arduino experience, but my PIC24FV setup takes about 30mA ,, has RTCC module, port expander and LCD with a second backpack PIC16F1827 and some LEDs. 12 bit AD reading mVolts has been a challenge answer .. use bandgap voltage x 4 (4.096v ) read 128 times take off high / low and average ...seems to work... No sun today 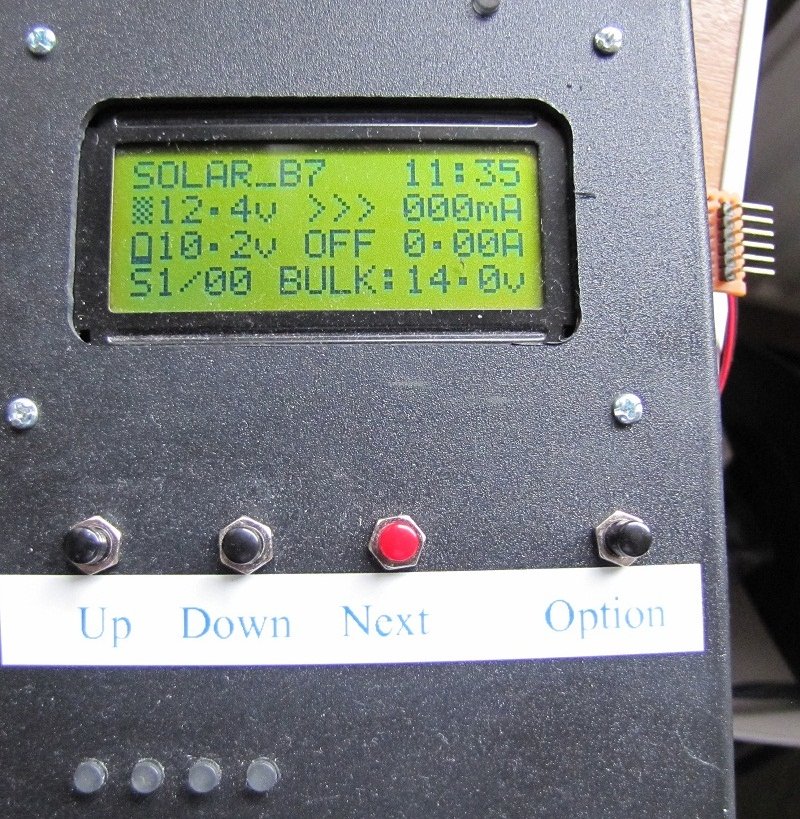