My central lock alarm system does not work

Most Helpful Member
1.6 volts will not be enough to operate a relay. Did the voltage go back to zero after 1.5 seconds ? You could repeat the test with the meter lead that was connected to + 12 volts connected to 0 volts (The metalwork of the car or the negative terminal of the battery.)

Most Helpful Member
Blip:
It's likely fine. Your dealing with 500 mS and likely the autoranging of the multimeter. So, you can either do:
1) leave it alone
2) Increase the time to 3.5 s (jumper on alarm system); Could be done for all tests.
3) Measure it without being in auto range.
4) Use like a 1K resistor, LED and diode as a test light, but be careful.
5) Connect a relay and listen for a click.

Most Helpful Member
I've made another mistake. I remembered the pulse duration incorrectly. I wrote 1.5 seconds when it should have been 0.5 seconds. I noticed this when I was looking back through the posts to see if the OP had given a clue to which time zone she was in as it is not in her profile. I had assumed it was a man until I looked at the profile.

I have set my multimeter on auto range

When I will return home I try it with led light

That's not what your avatar indicates .
My circuit designs should be regarded as experimental. Although they work in simulation, their component values may need altering or additional components may be necessary when the circuits are built. Due safety precautions should be taken with any circuit involving mains voltage or electrostatic-sensitive components.
Alec's First Law:-
Every problem has a solution (given the right information and resources).
Y

I have noticed that there are 4 four pins and there are no jumper on them. Near the four pins it's written "gnd swim +5V NRST"

alec_t said:
That's not what your avatar indicates .
Click to expand...

it's a big mistake I have change it

Most Helpful Member
The relays in the picture are not suitable. You need at least one set of changeover contacts. It is very unlikely that anyone will recognise your alarm so you need to find the manufacturer and get a manual. The diagram on the cover does not match the pins on the board.

This relay too I can't use it ?

Les Jones said:
I see you have now corrected your profile.
Click to expand...

Really needed to change it

I will need to buy this relay, hope that it will work
Y

I have increased the time, now I'm getting 11.86v on the lock or unlock cable

I have purchased 2 relays, here is the picture

, I have wired it like it should but still it does not work

What have I done wrong again?
L

Put your ohmmeter on pins 30 and 87a on each relay and check for a brief open condition when you toggle lock and unlock respectively.
The relay should click too.

Ideally, put a diode from pin 85 to pin 86 with the band facing 85. (This is for protection for the alarm electronics). It should be added, but strictly not necessary for testing.
Last edited: Mar 6, 2016
Y


Les Jones said:
Could you hear a click from the relays when the lock / unlock outputs changed state ?
Click to expand...

NO I don't hear any click from the new relay. The relay does not even energized


KeepItSimpleStupid said:
Put your ohmmeter on pins 30 and 87a on each relay and check for a brief open condition when you toggle lock and unlock respectively.
Click to expand...

The relay does not energized and I don't hear any click

Most Helpful Member
The outputs work the opposite way round to the the diagram on the case of the alarm so we need to change the way it is connected. This is the modified schematic. 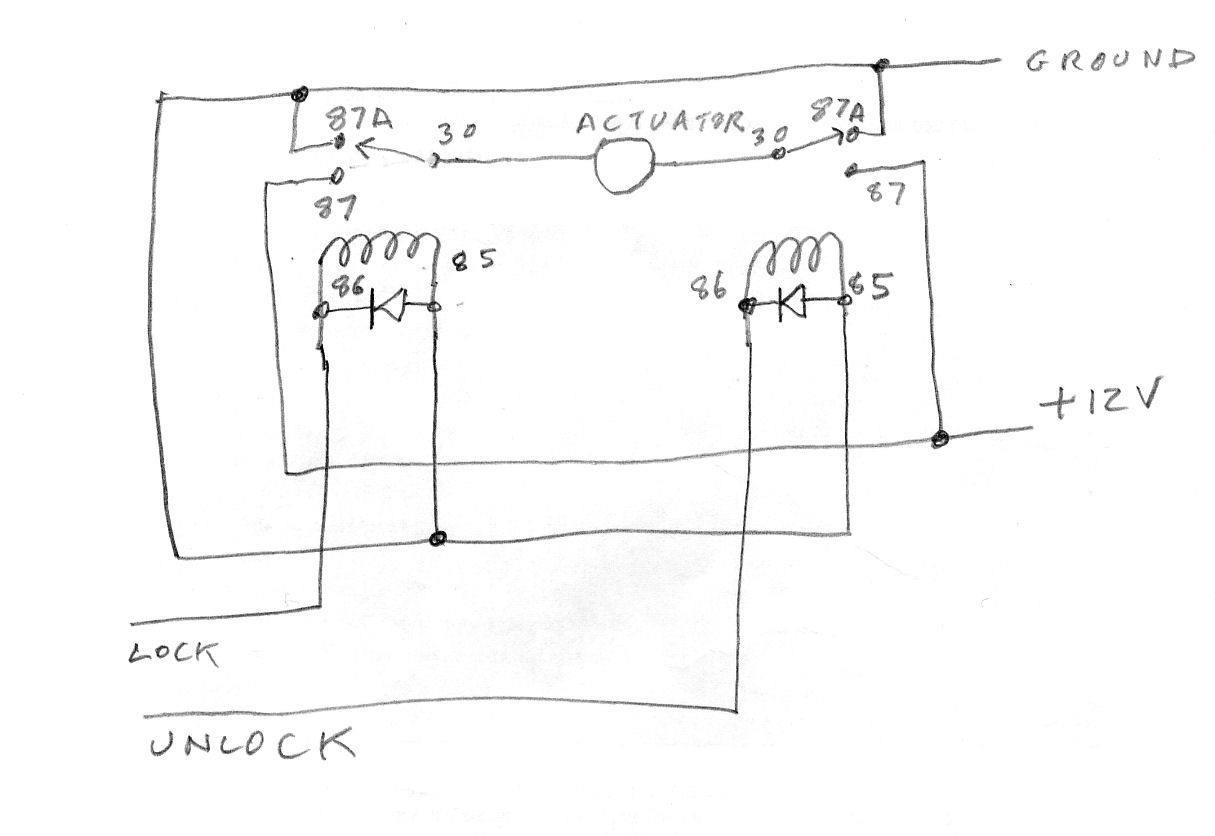 Your schematic is wrong, again!

The alarm outputs (lock and unlock) are negative triggers not positive triggers. They really should be called ~LOCK (NOT LOCK) and ~UNLOCK (NOT UNLOCK).

It also MIGHT be REASONABLE to keep LOCK POWER and ALARM POWER separate. Do not know about that one. At least show it separately.

Pros or "Good things" (separate power): You'll know if an actuator is bad because alarm will not work, but the OP will likely know anyway because of buttons. If actuator wiring shorts, alarm still works without the door locks.

Cons "Bad things" (separate power): Can not think of one.

keepitsimplestupid said:
Put your ohmmeter on pins 30 and 87a on each relay and check for a brief open condition when you toggle lock and unlock respectively.
Click to expand...

This assumes that nothing is connected to 30. (In baby step world: nothing connected to 30, 87a and 87) AND the ohmmeter is connected between pins 30 and 87a. Initially, the pins would appear shorted and would open with either a LOCK/UNLOCK command respectively from the alarm system.

keepitsimplestupid said:
Put your ohmmeter on pins 30 and 87a on each relay and check for a brief open condition when you toggle lock and unlock respectively.
Click to expand...

Go with the diagram. The "Ignition cutoff relay" is shown as (-) with the +12 and my alarm knowledge says it's likely (-) as well.

There is also issues with us as to not being specific enough.

Black probe connected to (-) of meter.
Red probe connected to (+) of meter.
Disconnect anything going to the Lock wire on the alarm system.
Connect the red wire of the meter to some source of 12V.
Connect the black wire of the meter to Lock
Observe meter - You should have 0 Volts
Activate Lock - You should have "some voltage pulse" for a second or so.

The should have 12 V is ideal. You might actually have 12 V for this test in both conditions because of leakage currents, so nothing might happen.
Last edited: Mar 6, 2016
K

I do not know why the relay is not getting energize.

I want to improve my remote car alarm system.