I'm trying to convert a 12VAC circuit to 12VDC, but the trick is, it has to output High and Low on an LED Headlight using the original switch. I'm trying to build a 'plug and play' unit to replace the current weak AC Globe. The LED draws from 1.5 to 4 amps depending on which one I use.

I've drawn a rough circuit of what I'm thinking but not sure about the eatrh/AC side? Note there are two bridge rectifiers, one is to convert the higher current for the light, the other just converts a couple of hundred milliamps to switch the relay.

Thoughts? Am I on the right track or miles off? 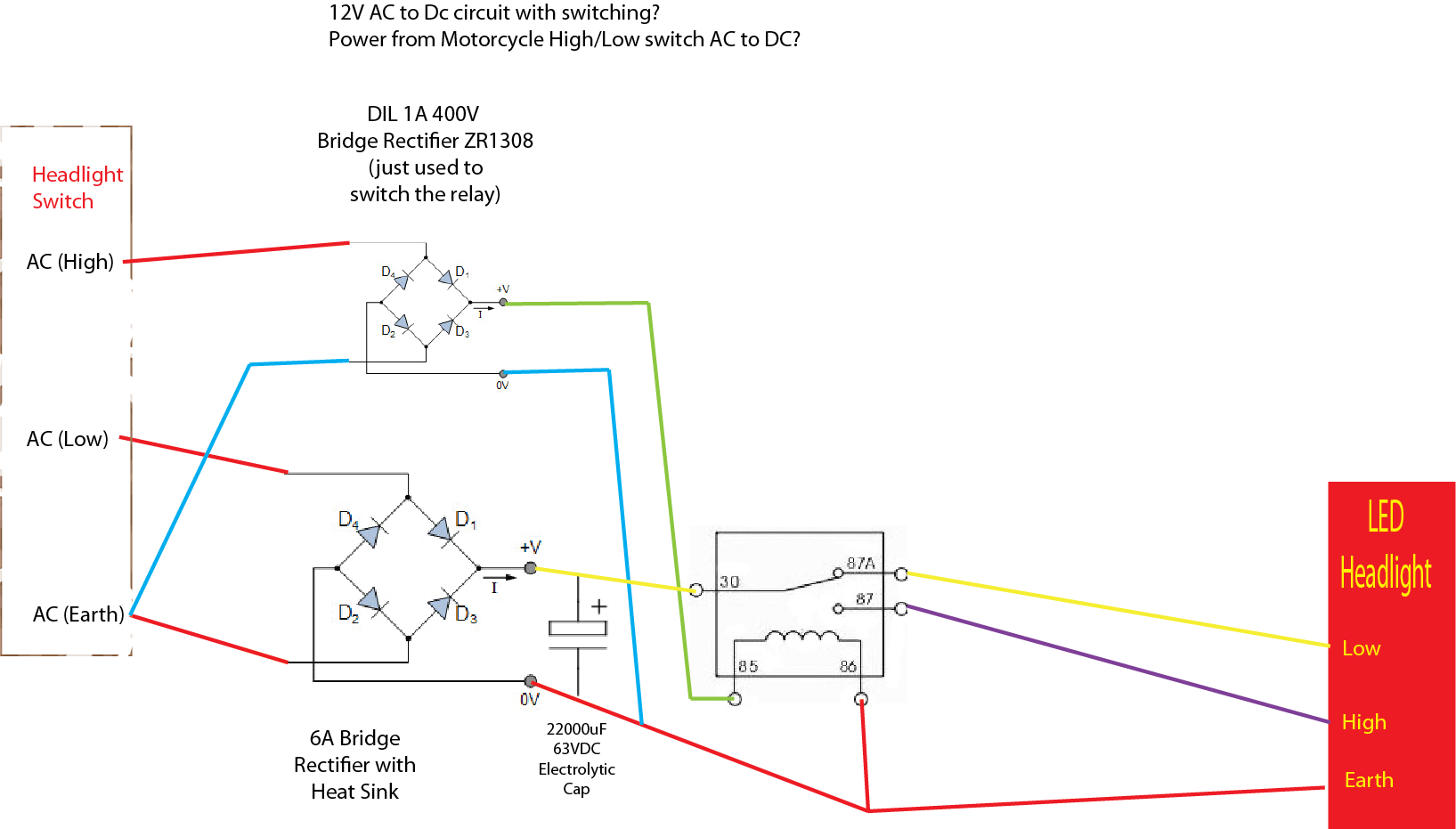 Pommie said:
Just out of curiosity, will the relay work on AC or does the frequency get so low that it drops out?

An automotive relay has too much inductance to work well on DC. It won't have a laminated core so there would be big eddy current losses. Also the voltage is constant (ish) and at high engine speeds the frequency could be quite high resulting in very little coil current.

The inductance of the relay means that there's not need for a smoothing capacitor when run from a bridge rectifier. The current won't stop between half-cycles as it will be kept going by the inductance.

One problem with AC relays can be that they chatter or buzz, as the current and therefore magnetic field reverses twice each cycle, and the relay can start to drop out twice each mains cycle. One solution is a shorted turn in half of the magnetic core, which delays the zero in the magnetic field slightly, so there is some force holding the relay energised all the time. However, there have also been AC relays made that contained bridge rectifiers and DC coils as a different way of getting rid of chatter.

It is much easier to have a two cheap, known, reliable components, a bridge rectifier and an automotive relay, than to spend a lot of effort engineering an AC relay to run on a variable frequency.
http://twitter.com/mtrak_uk
Upvote 0 Downvote

Is no one going to point out that motorcycle electrical systems are strictly DC? This whole discussion is misguided.

The real concern with such a retrofit should be whether the LED retrofit bulb accurately reproduces the the low/dipped beam pattern; many do not and are consequently quite dangerous!
Upvote 0 Downvote

jelliott said:
Is no one going to point out that motorcycle electrical systems are strictly DC? This whole discussion is misguided.
Click to expand...

No, because that's completely untrue - it's common practice on smaller bikes, and on off-road bikes, for the headlight to be powered directly with AC from an alternator coil.
PIC programmer software, and PIC Tutorials at:
http://www.winpicprog.co.uk
Upvote 0 Downvote

Nigel Goodwin said:
No, because that's completely untrue - it's common practice on smaller bikes, and on off-road bikes, for the headlight to be powered directly with AC from an alternator coil.
Click to expand...

Is there not a factory-original rectifier already providing DC output from that same alternator? Why not just move the power supply for the headlight switch to the existing DC bus?
Upvote 0 Downvote
D

jelliott said:
Is there not a factory-original rectifier already providing DC output from that same alternator? Why not just move the power supply for the headlight switch to the existing DC bus?
Click to expand...

On a lot of small motorbikes, especially those without electric starters, the electrical system is feeble. If there is a DC system, it is likely to be fed with a half wave rectifier, and it will only power devices that are used occasionally, like brake light and turn signals. There is often no regulator, and the battery, which as Nigel said is far too small, is just big enough to support the brake light and turn signals for a few minutes.

The ignition system is often a magneto type, where a coil generates enough energy for a spark in a single turn of the engine, so no connection to the DC system is needed for that either.

The same is true for some lawn mowers. https://www.lawnmowerforum.com/threads/riding-mower-lights.8581/

It might be possible to completely redesign the electrical system to generate much more current, have a full wave rectifier and a regulator, as well as a larger battery. However it would be a lot of work, and who ever did it would have to be careful to make sure that the battery charging was adequate in all conditions. The scheme being discussed is much simpler, and all the additional circuitry will probably fit behind the headlight that is being changed. As long as it works at tick-over and at full revs, it will be fine and it won't matter what state the battery is in.

I've driven cars with dynamos where there simply isn't enough electricity being generated to allow extended driving in town with the headlights on. Alternators changed that by working with the engine at tick-over. However, well after that, motorbikes were still being made that wouldn't keep the battery charged when driving slowly and using the brakes and indicators a lot.

As for the correct main-dip pattern, when I had a motorbike (1983 Honda CG125), changing from the standard headlight to a Cibié one meant that dipped beam had a proper shape to it, not just the hollow circle of an out-of-focus lamp. It wasn't perfect, as the lamp was designed for driving on the right, and the bulb had to be rotated a bit for driving on the left, and the cut-off lines were a bit curved, but it was far, far better than the standard one.

I realise that motorbike lights, even the AC driven ones, have probably improved a lot in 40 years, but an LED headlight will probably have a very good beam pattern.
http://twitter.com/mtrak_uk
Upvote 0 Downvote

jelliott said:
Is there not a factory-original rectifier already providing DC output from that same alternator? Why not just move the power supply for the headlight switch to the existing DC bus?
Click to expand...

Good comments, I like all the discourse because it's teaching me more about electronics.

Jelliot, as Diver300 says, these bikes run a limited DC output to the rear brake light, horn and indicators. The headlight is fed AC. Yes, I could just cut the feed coming in and fit the rectifier there but it's not my bike. In fact, the best solution is to chop out the whole AC regulator fitted on the bike and wire in a full DC rectifier back on the frame under the seat.

However, I'm working with people who want to upgrade their bike to a DC LED light with limited electrical or soldering experience. Therefore I'm trying to make a plug and play unit off the original headlight plug that I can supply rather than tell them to cut and solder lots of wires and probably make a mess of it.

This is the wiring on the Honda I'm working with and a pic of someone who made a unit to replace the factory regulator. You can see by the number of wires in the photo below that any one with limited experience wiring and using a soldering iron wouldn't even attempt it? 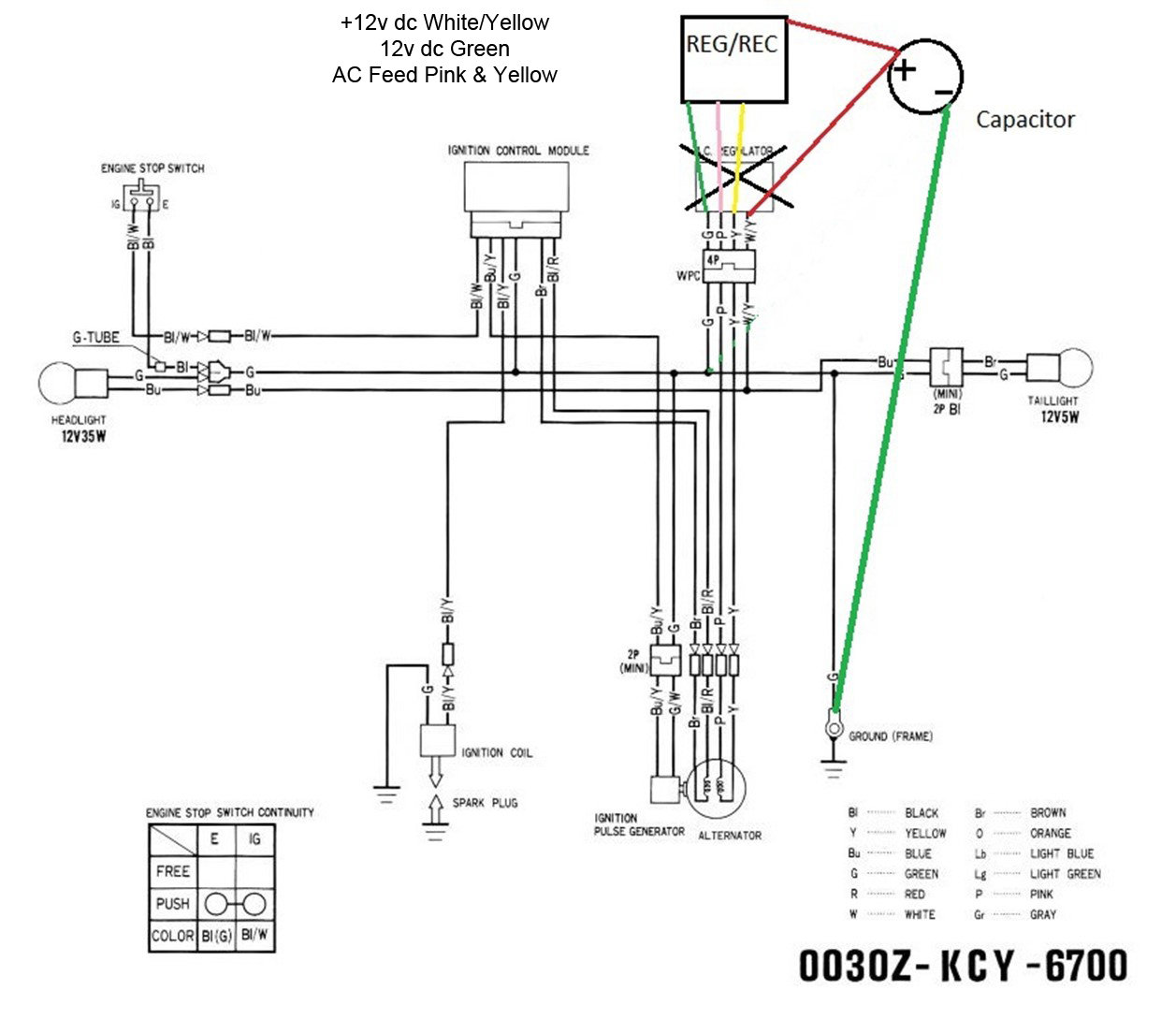 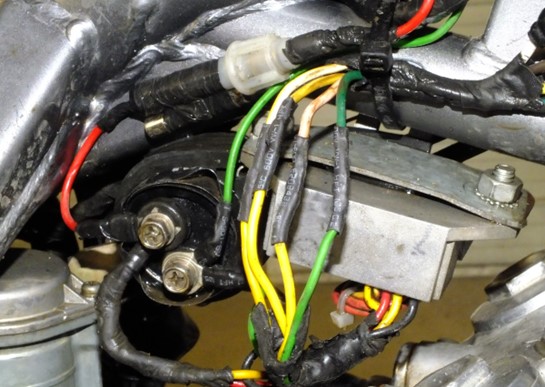