Is this generator thing for real?

Not sure if this is the right place to get an opinion on this, but here goes nothing...

I was looking around online and found this by chance... https://infinitysav.com/magneticgenerator/

There are couple of videos available online on youtube demonstrating it's working. The website looks neat so as the unit's price tag.

Just wanted people's take on it! Is this for real? A device capable of perpetual motion. Looks too good to be true.

Clarkdale44 said:
Looks too good to be true.
Click to expand...

It is. Don't be tempted.
My circuit designs should be regarded as experimental. Although they work in simulation, their component values may need altering or additional components may be necessary when the circuits are built. Due safety precautions should be taken with any circuit involving mains voltage or electrostatic-sensitive components.
Alec's First Law:-
Every problem has a solution (given the right information and resources).

Most Helpful Member
Some things.

1. For a company located in Korea and run by Russians, the English grammar and syntax on their website is way Way WAY too good. The writing style is American English - not British and not Australian.

2. Faraday's Law of Induction dates back to 1830's, the Lorentz description of magnetic force was published in 1895, and Richard Feynman got the Nobel Prize for "figuring out the electron" in 1962. That's a looooong time for some critical aspect of induction to be misunderstood or missed completely.

At the bottom of the main page they refer to the Lorentz force - incorrectly. They state that the Lorentz force produced by a magnet moving toward a coil "causes the generator to spin". If fact, it causes the generator to stop spinning. The physics of wires and magnets do not change simply because the wire is "bifilar" (a real term with real advantages in other applications) and the magnets use that word that is all the rage these days. In terms of power generation, magnets are magnets; the wires cannot tell the difference among the various metallurgies.

Most Helpful Member
Yep, scam - as the OP already knows, as he pointed out it's claiming perpetual motion.
PIC programmer software, and PIC Tutorials at:
http://www.winpicprog.co.uk
P

Most Helpful Member
And only $15,000. This is a relatively cheap scam.

To pre-order one, no less.

And they are trying to get people to donate money to them!

Most Helpful Member
Nice front panel though, it would look good as a film prop.
Something that the villain could use to do unspeakable things to James Bond Agent 007, while he is tied down to a table.

But not to worry, "Q" will have equipped him with a special gadget which will disrupt the machine by sending a signal to the WiFi and GSM antennas.
The villains island/volcano/ship/submarine/mountain top castle will be destroyed and Bond will escape with the pretty girl, and they will....
(moderator note, you cannot say what happens next, here on ETO).


JimB
Experience is directly proportional to the value of the equipment ruined.

Well, if it is fake then the joke is sure going on for far too long.. 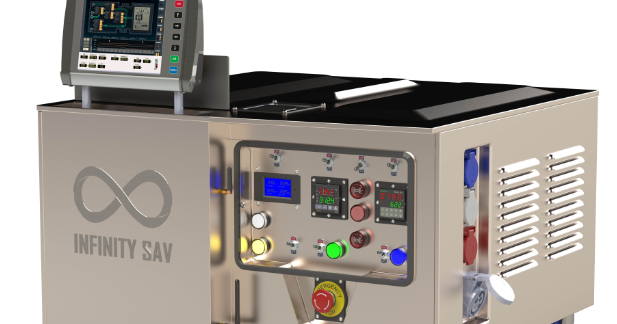 
I have to at least give them an applaud, for making it too convincing..

Clarkdale44 said:
Well, if it is fake then the joke is sure going on for far too long..
Click to expand...

It's not a 'joke', it's a scam - presumably they will keep it going as long as people keep sending them money, or until they are arrested (unlikely as they are probably in a country where it's not going to matter).
PIC programmer software, and PIC Tutorials at:
http://www.winpicprog.co.uk

That site itself appears dodgy, the organisation claims to have been started in 2007 but the domain was first registered in 2015!

And the website is just on a godaddy shared server, which seems unlikely for such a supposedly-large organisation.

It could be interesting to contacts one or two of the people they claim to be directors, who also have real public profiles on university or government sites, to see if they have ever heard of that mob?

Most Helpful Member
Any time a marketing effort starts by discrediting potential detractors is suspicious.

Here, infinity Sav says we are all intentionally mis-educated (left uneducated?) because is serves the purposes of our nations's regeneration.


Infinity Sav's free power - magnet generator, does it really work?​
Many people don't believe in Infinity Sav, they say, it's a scam. This is the thought of a limited education - education that serves the nation's regime.​
Like saying, I'm sure the lame-stream media will soon be telling you I am not actually a billionaire. It is just fake news.
K

Most Helpful Member
I would say the site actually looks nice and tidy, contemporary design, working and looks reasonably genuine on the cursory glance. People who are gullible enough to pay $15k will not be bothered to sceptically go through all that is written on that site, or that the manufacturer is based somewhere in China.
Also, the actual scam could be to ultimately give it to you for much less since you are such a good guy, like 5k up front and the rest upon customer satisfaction, or even something like 1k for shipping costs. Based on the number of fools in this world I guess it still makes a good profit even with the occasional sort-of professional looking ad or review, made by someone's brother with a drone and a DSLR.

Clarkdale44 said:
Well, if it is fake then the joke is sure going on for far too long..


I have to at least give them an applaud, for making it too convincing..
Click to expand...

The generator has no mechanical brakes. Risk of banging inside the container during the voyage. Bad design for such a jewel of engineering.
Agustín Tomás
In theory, there is no difference between theory and practice. In practice, however, there is.

Most Helpful Member
All those who believe in 'free energy' should be made to ride a bicycle with a dynamo permanently-engaged, then be asked to re-evaluate their assumption.
When I saved up enough pocket money for battery powered lamps, that thing came right off!

Insert a quote or something funny here.....
D

I was struck by a granted patent for the device. Truth is, I know squat about patents, so there is a lot of myth concerning the process. For example, I thought you would need a prototype to actually demonstrate that your device does what you claim it does - right? Then, if/when you could not do that, it would be the end of it.

So, for example, take a look at this application https://patents.google.com/patent/US20050173996A1/en note the claims section. Also note that the application was abandoned. OK, clear enough?

Here is the patent citation from google for the one mentioned in links provided in the thread. https://patents.google.com/patent/US7095126B2/en

Now, read the "objectives" of the device under the heading "Summary of Invention" - there [are] the usual free energy device descriptions. So, I am thinking WTF, how do you get a patent for this? How do you deliver a prototype that demonstrates all that is described there and so on and so forth.

Then look at the actual described claims under "Claims (9"). As far as I can tell, there is nothing terribly unusual or provocative about what appears as a claim. Note also that none of those "objectives" appears as a claim, even though they are used in the summary of the device.

Does anyone know about patents - is this just say whatever you want in the summary but don't make any claim that you can't demonstrate - that a prototype can't back up. Is that how it works?
Last edited: Sep 15, 2019

Most Helpful Member
I may be wrong with this understanding of patents, but as far as I see it, if you pay your fee and clearly define all of the details which comprise your 'device', including intended methods of construction, usage, and operation, you can pretty much patent anything. (Provided it does not infringe upon another patent)
Doesn't always have to be useful/practical for any purpose, it's simply a way of protecting an idea.
Someone else comes along and produces an item/product which infringes upon your patent, you can go after them, but expect to be greasing the palms of some slick guys in expensive suits during the process.

Mickster said:
Doesn't always have to be useful/practical for any purpose, it's simply a way of protecting an idea.
Click to expand...

I don't think that is correct. At least it is not what is being said here https://en.wikipedia.org/wiki/Incredible_utility:

"In United States patent law, incredible utility is a concept according to which, in order for an invention to be patentable, it must have some credible useful function. If it does not have a credible useful function despite the assertions of the inventor, then the application for patent can be rejected as having "incredible utility". The invention does not have to work the way the inventor thinks it works, but it must do something useful. "
K

DrG said:
I was struck by a granted patent for the device. Truth is, I know squat about patents, so there is a lot of myth concerning the process. For example, I thought you would need a prototype to actually demonstrate that your device does what you claim it does - right? Then, if/when you could not do that, it would be the end of it.
Click to expand...

As far as I'm aware there's no requirement for a demonstrable working prototype, as shown by the countless patents on older perpetual motion machines.
PIC programmer software, and PIC Tutorials at:
http://www.winpicprog.co.uk

Most Helpful Member
Under UK/EU Patent law there is no requirement for a working model/prototype, but for an invention to be patentable it must be novel, non-obvious and 'capable of industrial application'.
In granting a patent application, benefit of the doubt is given to the applicant by the Patent Office, on the basis that a Court can ultimately decide whether the patent is valid or not. Thus the existence of a granted patent is no guarantee that the patent is valid.
Last edited: Sep 16, 2019
My circuit designs should be regarded as experimental. Although they work in simulation, their component values may need altering or additional components may be necessary when the circuits are built. Due safety precautions should be taken with any circuit involving mains voltage or electrostatic-sensitive components.
Alec's First Law:-
Every problem has a solution (given the right information and resources).
You must log in or register to reply here.
Share:
Facebook Twitter WhatsApp Email Link

This aint steorn but is this hype or real....

A
Is this Cicuits Works ?

G
This is theatrically possible mega watts of power.