Hello everyone,
I need the help of the Community,
I am working on a project, I need to create a device that can open or close a door lock via Bluetooth, this device works on batteries and it is just a simple adapter that you plug on your existing door lock, you just put the key Inside and it should be able to turn the key to open the door.
I have made a lots of research and tested a lots of things, at this moment, for prototyping I am using a Bluetooth chip nrf51822 to control a stepper motor via Bluetooth, the stepper motor is this one : https://www.pololu.com/product/2267,
and the driver I use to control it is this one : https://www.pololu.com/product/2966
I thought it would be enough and that I will have enough power to turn the key in the door lock, but obviously not, I tried on a door prototype with a new lock that works very smoothly and it has some difficulty to work, I power the system with 2 Li ion batteries (https://www.tinytronics.nl/shop/nl/...650-li-ion-batterij-2600mah-5.2a-icr18650-26j) that should give enough power I think.
When I noticed that the motor didn't give enough torque to turn the key I printed in 3D a planetary gearbox with a 5:1 ratio, so the torque is multiply by 5, but there again it doesn't work well. (I tried on a normal door and it was just impossible to open)
most of all, using a planetary gearbox reduce the speed of the motor drastically and I'm afraid that it taked hours to open the door.
some device exist on the market that require only 4AA batteries and it looks like they can open every doors, I Wonder how it works.

So my question is the Following one :
Should I use a stepper motor? Maybe I should use a servo motor? is it because of the stepper motor I use that I can't open the door?

The thing is I wanted to use a stepper motor because I can do multiple turns with a stepper motor with very few angle, some dorrs needs to turn the key 6 time to be open, whereas than with a servo I can't, it is limited to a certain angle and I can't do multiple turns. Also I Don't know how I could say to the servo how to stop when the door is open if I can't turn it on a precise number a turn.(I hope you understand what I mean ^^)

So if you I have any idea or suggestion, everything is welcome!
Thank you!

Torque is the issue, as in, you will find it very difficult to generate enough of it to actuate conventional door locks with the system you have described. And as you have seen for yourself.

Is this a project just for your own use?
Semper ubi sub ubi.
W

Torque is the issue, as in, you will find it very difficult to generate enough of it to actuate conventional door locks with the system you have described. And as you have seen for yourself.

Is this a project just for your own use?
Click to expand...

Hello,
Yes I know now that it is difficult with my system, but I Don't really know how it should work.
Yes it is a personnal project, I am a student and I am Learning, I though that having a personnal project could be a good idea to learn, and this project contains a lot of constraints, perfect to learn!

Most Helpful Member
You might consider an electromagnetic plunger. If your system was designed to charge up a hefty capacitor (say, 1F) over time, that might give you the short term power needed to actuate the plunger and move the lock mechanism. Only one direction though...

There is the option of replacing the "strike" with one of these. Note its a 12VDC rig.
Semper ubi sub ubi.

Most Helpful Member
Yeah, go with cowboybop's way. Making something that "works with everything" (i.e. works with any lock whatever it may be) adds several layers of unneeded difficulty. Like a Jurassic Park door lock: 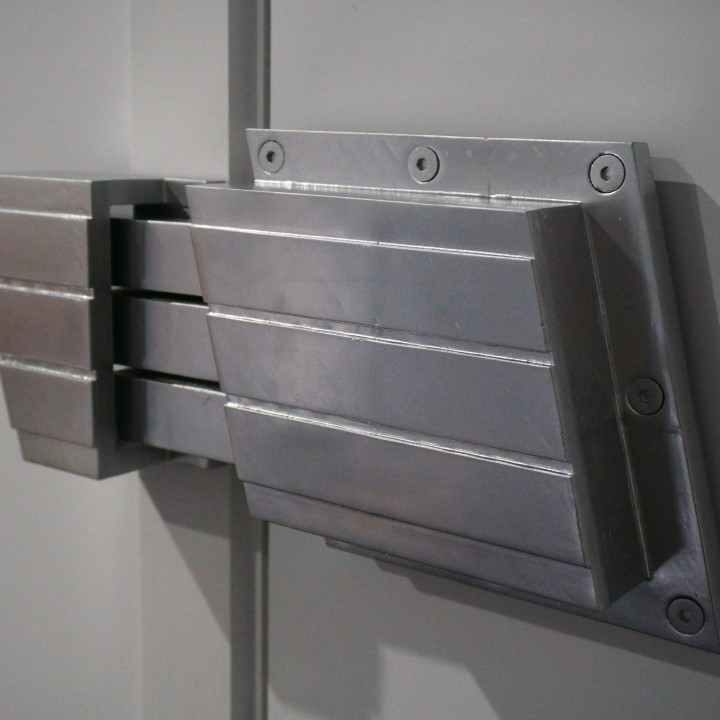 For the motors that I imagine you using, 5:1 gear ratio is nothing. You need at least 100:1 and I wouldn't be surprised if you needed as high as 500:1 to get the torque required.

Your concern about taking hours to unlock the door when gearing down farther is unwarranted. A small motor might spin at 10,000RPM. even at 500:1 gear reduction, that's still 3 seconds for one rotation to turn once which perfectly acceptable. "But some doors take 6 turns to open and I don't want to wait 18 seconds to unlock the door", you say? Well, that's just the tip of the iceberg for trying to make something that is "one size-fits all" which is why you don't do it. Or if you insist, you don't do it in the most obvious way and get creative. (Imagine how complicated a sewing machine would be if it did things the way a human did, that's why it does it in a completely different way which is simpler yet more effective).

None of this is even considering how some doors aren't fitted properly so you actually have to pull or push on the door as you turn the key or else it won't even budge. Go with the plunger. That's a one-size-fits all that's both simpler and more effective and steps around all these issues.

Also...Bluetooth is unnecessary here. It requires excessive complexity, hardware, and software, and power consumption on both ends (key and lock), and has excessive range (which is not just unnecessary in this case but undesirable). Something like RFID solves all these problems.

The coolest thing about a radio door with a plunger is that you can install it onto the opposite side of the door without modifying the original door mechanism so that so it's not even obvious that it is there to the person trying to open it. You can leave the original keyed lock present as a double-guard or just leave it unlocked. Again, Bluetooth becomes a liability here due to excessive range. Bluetooth is just a bad choice for this application. Save it for applications that actually need it.
Last edited: Jan 9, 2019
K

You struck a nerve somewhat, What's out there won;t work for me exactly. My requirements are out in left field somewhere. Picture lots pf people visiting, some never again because they don't work out. Someone who cannot answer the door and can;t see who's at the door. Someone that's never used a cell phone unless one was handed too her. 90+ years old and no fingerprints. People may or may not want an app on their phone. Usually scheduled entry times.

In some respects an electric strike controlled by a landline phone could work, bit wiring is messy, Then there is an Android device with say video doorbell. Ring comes to mind, but everything is secretive. Even a Keyfob for mom could work. Would like lock status where she is at.

I looked at Locketron, when seemed to vaporize. It interfaced with Ring and had an API. RING uses existing doorbel wiring.

There was another system that only worked with European locks (I'll have to look for it). They are better standardized there, That one operated a real spare key.

I wish someone would make a hardware API that would say have lock, unlock commands and some sort of status, like locked, unlocked, jammed; Door shut. Signals I might be able to derive, but I'd like my own actuator.

I need something that can turn about 1-3/4 turns from rest clockwise or counter-clockwise and always return to rest or INDEX.
So, lock is turn 1-3/4 turn left and back again. Unlock just the reverse.

Nope, what we have is deadbolt movers or this standardized European lock that doesn;t exist in the US.

Then, don;t forget, you have to be able to turn it by hand.

But what about maglocks. They always have to have a means to egress and backup power etc,

So, yep like the assisted mechanical lock with the same key that you always used.

In the 1980's I had one of an early RFID lock. It used microcassettes to let people in. When the microcassette gizmo didn;t work, th elocks were configured failsoft, They let any card in. It did log the card #.

They were great. The card in my wallet and my butt against the wall where everyone knew where the sensor was until it fell behind the wall.

So the TS is missing the encoder concept along with the low power concept.

The software can get extremely complex, but when yu have a keypad, real key, bluetooth LE, apple apps, android apps, cloud control
And what about the UPS and FEDex guy or the postman that wants a signature?

I can't have all of the options. Then there are a trusted few people with real keys and the trusted few that can obtain keys from a keysafe.
then there is 911 that wants you to have a Knoxbox installed. Controlled access fire company only. Not even you, You can't use the box to get in when you accidently lock the keys in the house.

I not have been much help and I didn't reference real stuff.

S
Servo motor with a LOT of torque