30 leds blinking with music (not vumeter)

Nice forum, I am new here, i hope somebody here (an angel) can help me. 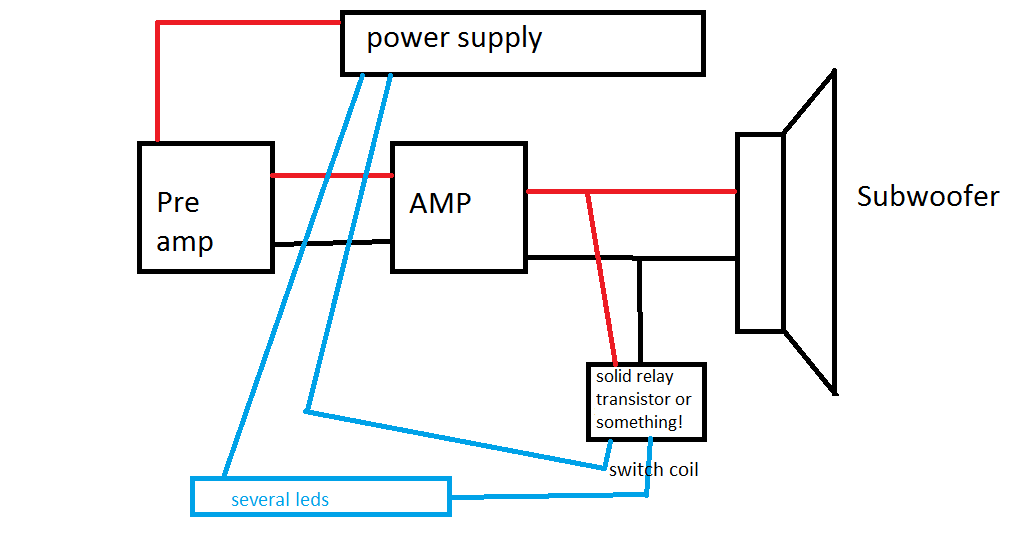 - I am making a subwoofer box for my room, which its specs are 8" 4ohm subwoofer feeding by about 100w.
- I put about 30 leds that lets say, they are directly connected to the power source 24V DC of course with their resistors, they are always OFF because I still have to work in a switch that switch them at the rhythm of the music.
- I initially thought using a tip31, with the base connected at the output of the "pre" amp, so now this tip31 will switch the leds that I mentioned. I am doubting about this idea (some people use it as a basic vumeter of single led) and yes, I need all my leds on/off at same time, not like those classic vumeters, I said that I although this is a good and basic idea, I think that this will low the quality and strenght that pre amp delivers to the line in of the amplifier, is not it?

- Then I thought that what if I take some signal from the ouput of the amplifier, there are lots of watts (100watts) can I simply connect there a solid state relay (3-30V) that will switch my led circuits? maybe I cannot connect the relay directly to the speaker terminals, but what about adding a resistor, or a ic7805, or I DONT KNOW, and thats the reason I am posting here.

- I also thought making a simple vumeter that triggers with an electrec micrphone, the idea is good enough I think, but theres a risk that leds turn on with external noises in the street or my room, which is undesired.

- I also thought adding a pre amp which has high output, so it can feed amplifier and trigger the tip31 without any effort, so the signal will be strong even with these components, I really dont want to do this, because the bluetooth amplifier board I am buying, already come with its pre amp, so its not convenient working in another pre amp, what I pointing is to take some signal from amplifier output, please tell me there is a way, I have seen passive vumeters where the leds are being turned on just by the amplifier output, I don want to feed all my leds from that energy, I simple want to use a little of that energy to simple trigger a switch, so the leds that are directly connected to the main power supply, can blink with the sound.

What would you recommend me ?

Most Helpful Member
Like we discussed on the other website, when the volume control is turned down then the LEDs will not light and when it is turned up then the LEDs might be on all the time.
You need to take the line output from the preamp that is before the volume control, amplify it to a few volts with a little transistor that does not affect the audio and it drives the TIP31 that gives current to the LEDs.
Uncle $crooge

audioguru said:
Like we discussed on the other website, when the volume control is turned down then the LEDs will not light and when it is turned up then the LEDs might be on all the time.
You need to take the line output from the preamp that is before the volume control, amplify it to a few volts with a little transistor that does not affect the audio and it drives the TIP31 that gives current to the LEDs.
Click to expand...

I ended concluding that as well, that's why I decided taking signal from the pre amp. I dont know how to add a little transistor before the tip 31, if I dont do that, its like the pre amp signal and quality will be compromised? or really tip31 wont take big amount of signal? if so, can you help me locating a little schematic that does that? Thanks so much.

Most Helpful Member
The cheap no-name-brand Chinese class-D amplifier you bought from ebay has no audio spec's and no preamp output. Its input is only Bluetooth so the LEDs must be driven from its output if they do not draw too much current.
Uncle $crooge

M
LEDs to blink with music