As supply line voltages have dropped, typically from 5V to 3.3V and even 1.8V for many microcontrollers, it has become increasing difficult to drive MOSFETS. This article highlights a chip that contains both N and P type very low gate drive (VLGD) MOSFETS which overcome this problem. Not only is the chip compact, but it is jelly bean priced and freely available. I have found that it is a handy chip for quite a few designs so far, and I thought other ETOnions might also find it useful or maybe just of interest. It seems to be the kind of chip that you might want to keep in your spares box.

The miniature case is a problem for experimental use. Two solutions are to glue the case, pads up, onto a PCB and solder thin wires to the pads. This approach would only be suitable for low power applications though, because there would be no heat conduction via the pads. Alternatively, the case could be mounted on a header to convert to through hole.

JFETS were ground shakers when they came out in the early 1970s: they were also a great comfort to us valve (tube) boys because, essentially, they worked just the same and, better still, at a price you could get female versions (P types) too.

Then in the early 1980s there was an earthquake when International Rectifier (IR) introduced the first NMOSFETs. They were also similar to valves but differed in that they were enhancement mode rather than depletion mode like valves and JFETS. But the shattering thing was that they could handle the same current as high power BJTs and, quite soon, they were able to handle currents of 50A and then 100A. This meant that with a mere 20V and no current on the gate you could control massive amounts of power.

With time, new circuit techniques were developed to get around these characteristics but, in the main, MOSFETS became preeminent switches in switch mode power supplies (SMPSs) and also as solid state switches for turning power lines on and off. Now, there is a vast selection of NMOSFETS and PMOSFETS to suit a wide range of applications.

Another major problem with MOSFETs is the relatively high gate voltage they need to get any drain current flowing, so the recent initiative has been to produce MOSFETS with very low gate drive voltages (VLGDs). In fact, Advanced Linear Devices (ALD) have the ALD110800 range of MOSFETs with zero gate drive voltages. But, most sensitive MOSFETs are low gate drive (LGD) types which typically have 1V gate threshold voltages and conduct a reasonable drain current (ID) with 2.5V gate voltages.

NXP (ex Phillips) seem to specialise in medium and low power LGD and VLGD MOSFETs at reasonable prices. For general applicability, the PCMPB5530X, which has complementary MOSFETs in one case, seems to be the pick of the bunch. Even if you only want an N type or P type MOSFET, this chip is so cheap that it is no extra expense to simply not use the other MOSFET (connect the gate and drain on the unused MOSFET together).

The characteristics of the PCMPB5530X are:

Here is a typical PMCPB5530X application, an interface to a microcontroller unit (MCU) to turn on a peripheral (shield) power line. It only comprises two components: 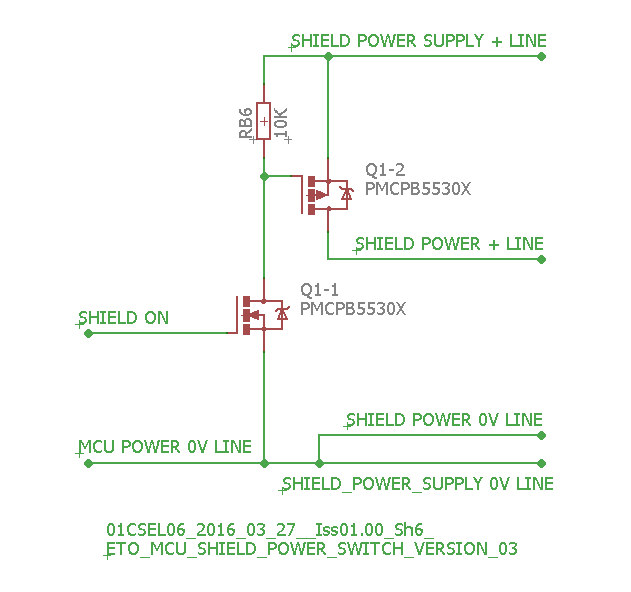