Overview History Discussion
For audio volume control an audio-taper pot (giving approximately a logarithmic change in output level versus pot rotation) is desired to match the logarithmic response of the ear to sound level. That gives a perceived linear change in loudness level versus pot rotation. Although reasonably common, sometimes an audio-taper pot is not readily available, particularly for an odd form factor or dual pot configurations.

One solution to this is to add a single resistor from a linear pot wiper to ground. When sized properly, this resistor will give a close to logarithmic response with pot rotation over a majority of its rotation (about 10% to 100%), which should give satisfactory results for most audio volume control applications. Standard audio-taper pots also deviate from true logarithmic taper at low levels since the log magnitude (and thus the dB magnitude) rapidly approaches large negative numbers as the volume goes toward zero.

Below is the LTspice simulation of a linear pot with such a resistor (R2) to ground.
Experimentation has determined that a resistor value of 10% to 20% of the pot resistor gives a good approximation of an audio-taper pot.
The graph shows a linear plot (top) and a logarithmic (dB) plot (bottom) of volume level versus pot rotation (1% to 100%) for R2 values of 10%, 15% and 20% of the pot resistance.
It shows a near logarithmic response from about 10% to 100% of the rotation.
It has a volume level of about 15% to 20% at 50% pot rotation, which is in the typical range for audio-taper pots.

One possible disadvantage of this circuit is that the load presented by the pot to the source changes with the pot position, varying from the resistance of R2 at full rotation to the pot resistance at zero rotation. The source must be able to tolerate such changes with a negligible effect on the signal.
A typical op amp will work fine as such a source. 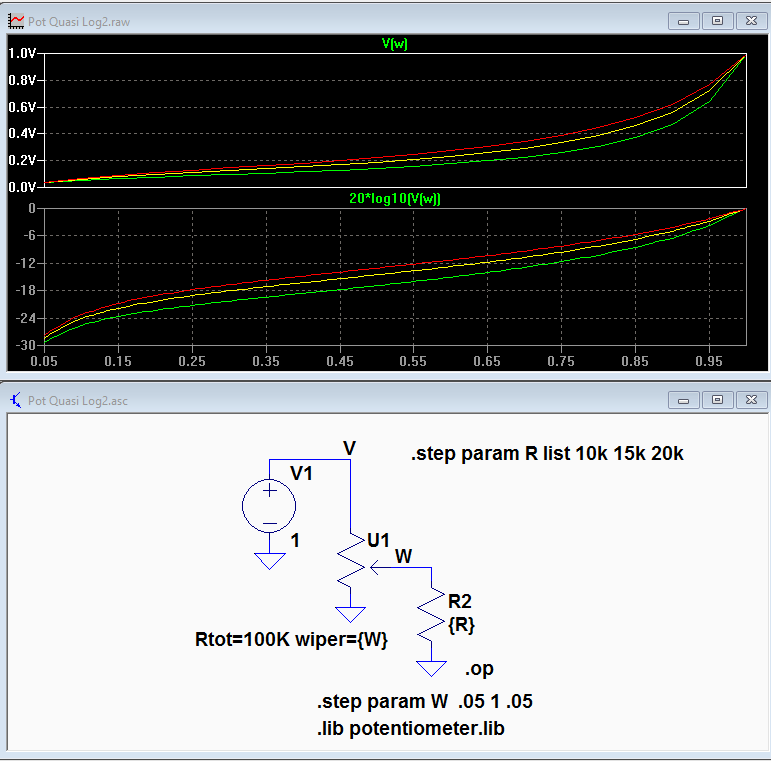