I am designing a real time clock circuit (RTC) and using a super capacitor as a back up power supply. The RTC I am using is PCF8563, and I am using a 3.3V super capacitor (DMS3R3224). The connection is as shown in the image below: 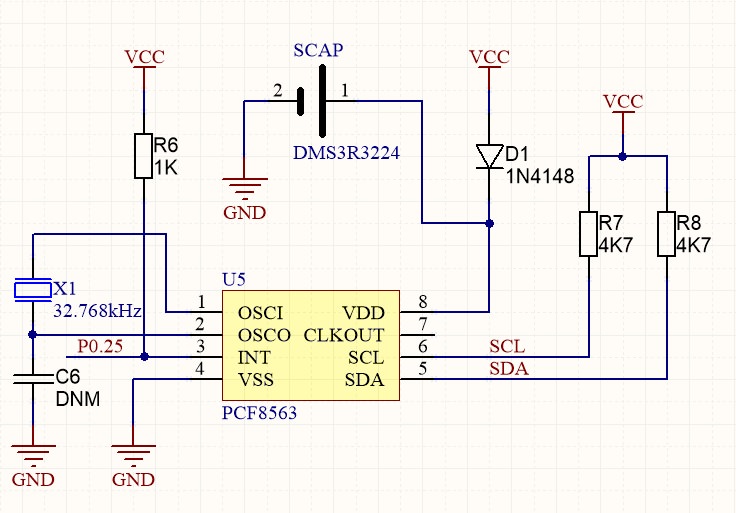 Most Helpful Member
I really hate the name 'super' capacitor, as it encourages people to think they are particularly useful - when in reality it's just a very poor imitation of a battery.

Anyway, as far as this circuit goes it looks 'OK', but it will only give a fairly short backup time, and the capacitor will probably fail after a couple of years. They were used extensively in cheap VCR's for this same purpose, and it was an EXTREMELY common fault - I've replaced hundreds of them.
PIC programmer software, and PIC Tutorials at:
http://www.winpicprog.co.uk

Most Helpful Member
Seems to me I read the recommended procedure to charge a supercap is through a current-limiting resistor to prevent excessive current flow and overheating.
S

Nigel
I would be very much interested in your experience related to these devices.
Why do you think was the reason for the failure rate? Improper charging!

schmitt trigger said:
Nigel
I would be very much interested in your experience related to these devices.
Why do you think was the reason for the failure rate? Improper charging!
Click to expand...

No, I think they are just fairly useless devices.
PIC programmer software, and PIC Tutorials at:
http://www.winpicprog.co.uk

Most Helpful Member
Might be a good idea to put a current limit resistor inline with the diode that charges the cap, otherwise the current rushing into the cap on power up could be very high if its discharged, 220 ohm would be a good start.

Heres a charge time calculator, the cap will never be fully charged with a series resistor, but it will get pretty close.
https://www.allaboutcircuits.com/tools/capacitor-Charge-and-time-constant-calculator/
Red to black, black to red and blue to bits.