I brought a string of UV LEDs to make a curing station, and I'm trying work out what the LEDs in the string are: 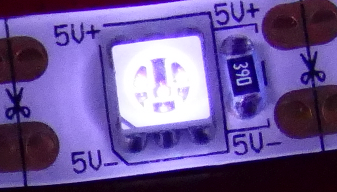 Tried digikey and rscomponents, but neither found anything that looked right.

Are there better places to look?

(Also, there are obviously 3 seperate LEDs in the package and it safe to assume that they are wired in parallel with each other and in series with the 390Ω resistor?)

Most Helpful Member
They look to be the same as these, but the site does not give much info.. 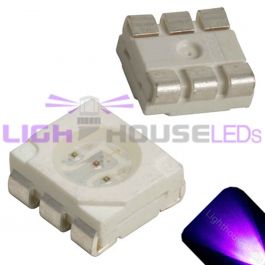 The PLCC6 SMD is a very small LED that is used in many types of today's popular electronics. The uv / purple PLCC6 LED color is bright and unmistakable.

rjenkinsgb said:
They look to be the same as these, but the site does not give much info..
Click to expand...

Not a lot, but more than I had. It led me here. 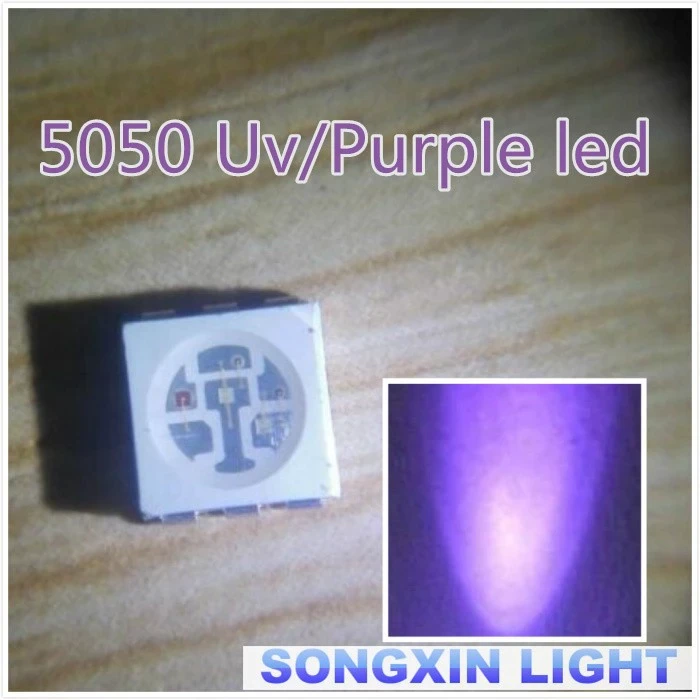 Which is identical to the chips I've got.

Again not much information, but it does say:
Which would explain why they appeared so dim when connected to USB 5V.

With that 390Ω resistor, I should be able to run these at 12 volts and 8mA without a problem?

The total LEd current should be around 40 - 45mA depending on the exact LED voltage.

ps. If they are decent UV LEDs, most of the output will be invisible - be careful of your eyes, "Arc eye" is extremely unpleasant!!
B

F'ing smd! Thanks.
Seems my perception of the low brigthness is correct, but because the USB port it was connected to can only supply 500mA; or 4 mA per LED.


rjenkinsgb said:
The total LEd current should be around 40 - 45mA depending on the exact LED voltage.
Click to expand...

I've detached one from the string so I can check the actual voltage drop & current draw.

rjenkinsgb said:
ps. If they are decent UV LEDs, most of the output will be invisible - be careful of your eyes, "Arc eye" is extremely unpleasant!!
Click to expand...

They are safely -- if currently, somewhat crudely -- contained inside a red coloured plastic container.
Last edited: Dec 8, 2021
You must log in or register to reply here.

Part number for this connector