This is likely to be my first and last thread on this forum. This is a cry for help as I'm currently at a loss as to how to proceed with this issue. I've no experience with radio comms and I'm struggling to get a satisfactory solution from our supplier so here I am asking for help! Anyway, enough of the sob story and on to the problem:

I work in the education sector and at one of our sites we have a number of electricity meters which send data wirelessly (via radio transmission @ 153.1MHz) from each of the main buildings to a central hub located in the centre of the site. We had been successfully receiving data daily from all of these meters for at least 2 years. Then, one day in October last year, all of the data suddenly stopped being recorded by the hub. Naturally we assumed the hub was faulty as this is the common point of failure and so it was replaced but to no avail. We have since found that there is some background interference at around 153.085Mhz that appears to be preventing our metering equipment from operating. From the graphs produced it is clear that the interference is constant - it does not pulse, it does not drop, it just exists permanently. I do have some video showing the signal - if it is likely to be of use please let me know and I'll be happy to upload it.

There are approximately 7 buildings on site, each with their own buildings services; intruder systems, fire alarms, CCTV, etc. Therefore turning each item off in turn to try to isolate the root cause of the problem is likely to take some time and cause some disruption to building users with no guarantee of success.

I'm therefore not entirely sure what approach I should take to make progress with this. Ideally I need some kind of device that can accurately pinpoint the direction and strength of the signal if such a thing exists. This might at least enable us to identify if the interference is from one of our buildings, or from source off-site. At the moment we've been relying on a walkie-talkie to determine the signal strength so not exactly revolutionary equipment! Since then we've installed a piece of software on a laptop that shows the frequency range but again, this does not give us any idea of the signal strength or direction.

If anyone has any suggestions for how we could look to resolve this problem, or to suggest some equipment that we could either hire/borrow/purchase then I would be very interested to hear from you.

Thanks in advance.
Rob

many_methods said:
We have since found that there is some background interference at around 153.085Mhz
Click to expand...

How did you determine this?


many_methods said:
From the graphs produced it is clear that the interference is constant
Click to expand...

Where do the "graphs" come from?


many_methods said:
we've been relying on a walkie-talkie
Click to expand...


many_methods said:
we've installed a piece of software on a laptop
Click to expand...

What software?
Is this something which works in conjunction with an SDR dongle?


many_methods said:
If anyone has any suggestions for how we could look to resolve this problem
Click to expand...

Have you considered contacting OFCOM, the UK Radio Spectrum Regulator.
They may (should) be able to help, assuming that this is a system operating under a country wide system licence.

For now, if you could answer my questions above, it may give some idea how to proceed.

Happily retired and playing with my big boys toys every day.
M

Hi Jim.
Thanks for the prompt reply.

The walkie talkie used was an ICOM IC-R20. It has a simple signal bar to indicate the strength of the signal. However, as the signal bar remained at max for the majority of the survey it was of little use to give a really clear indication of where the signals were coming from. The site is approximately 300m across and the only time the signal dipped was around the boundary of the site.

The software used is called Airspy and it yes it does make use of an SDR dongle. I have attached two screenshots from the video I took of the software in use.

The first photo below shows the 'interference' we're seeing. This was constant throughout our 1-day survey and we believe this has been the status quo for the past year or so. As you can see, there is a spike at 153.085MHz which our supplier believes is not related to the metering equipment installed.

The second photo below shows how the software responds to a total of four pulses that were produced by the engineer holding one of the metering transmitters close to the dongle and forcing it to transmit. As you can see, the signal intensity increases as the fourth pulse is recorded. The lower, time based graph, shows each of the previous three pulses as a very obvious horizontal line. The fact that none of these pulses are being picked up by the main hub on site leads us to believe that the background signal shown is causing interference.

Hope this helpful but apologies if any of my terminology is incorrect - as mentioned, radio comms is not my forte and I am just basing my description on what I've been told by the engineer who I conducted the survey with.

I've not considered contacting OFCOM yet but will do so if we can confirm that this is genuine interference from an external source.

Thanks again for your time on this.
Cheers
Rob

Most Helpful Member
OK Bob, lots of good information there.

A couple more questions,
Where abouts in the UK are you located?
Who or what lead you to use the IC R20 and the Airspy+ Dongle?


many_methods said:
However, as the signal bar remained at max for the majority of the survey it was of little use to give a really clear indication of where the signals were coming from.
Click to expand...

OK, I am making the assumption that you were using the supplied telescopic antenna with the R20, or a flexible "rubber duckie" type antenna.
I suggest that you use a much shorter antenna for hunting the signal using signal strength indications.
A shorter antenna means less signal and hence a lower reading on the signal strength indicator (bargraph).

You could remove the existing antenna and put a short (5cm or so) length of wire or a paper clip into the antenna connector.
WARNING do not force an oversize wire into the connector!

Also, the R20 has an attenuator function with reduces the signal from the antenna by 30dB (a factor of 1000).
How to select the antenna is described on page 19 of the R20 handbook.
Don't have the handbook? It can be downloaded from here:
http://www.icomuk.co.uk/files/icom/PDF/productManual/IC-R20.pdf

It maybe worth trying the attenuator before the "paperclip antenna".
Also if you are using the telescopic antenna, keep it as short as possible.

I think that is enough for now.

Most Helpful Member
I have an Airspy connected via USB to a small Win10 Tablet computer running SDR#. With a small Yagi antenna, the thing is quite portable. I can go walkabout with it to track down the RFI emanating from the latest piece of Chinese-crap-electronics that has been imported to the neighborhood. I suggest you try the same, either with the R20 or the AirSpy.

You might find the birdie is being radiated by the computer you are running the Airspy from. Walking around with a portable setup will quickly dispel that, as would being able to rotate the directional antenna.

For the antenna, I suggest that you build a measuring-tape Yagi antenna, like this one. To scale the antenna to 153MHz, just multiply the dimensions given in the link by the factor 146/153 = 0.95, which means shortening the elements and element spacing by 5%... 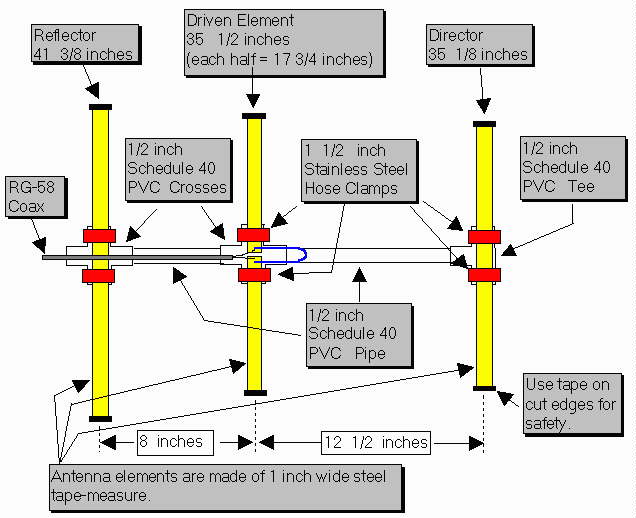 I have built several of these antennas for 146MHz for 2m Bunny-hunts, and I scaled one to 122MHz for Aeronautical Search and Rescue use. They work very well, with better than 30db front to back ratio.
Last edited: Nov 23, 2016
I am an engineer and an academic. When I talk about current it flows from positive to negative.
Most of the circuits I post have been simulated with LTSpice. You should breadboard them. If I post
a picture that is too small, click on it, and it will open full size.

My suggestion is to get some local help. Even if you had the ideal equipment to find the problem, you may not have the expertise to use it efficiently, and building a useful directional antenna is not a trivial exercise. This kind of problem is very familiar to some Amateur Radio enthusiasts and I suggest you make contact with a local amateur radio club and inquire about a Radio Direction Finding (RDF) specialist or an Radio Frequency Interference (RFI) specialist, that is, someone who does this sort of thing a lot. You may not find such a person at the first club you contact, but the community is not so large and they could probably recommend someone. The idea is to try and get them to come out and find the source of this problem for you.
RadioRon

MikeMl said:
I have built several of these antennas for 146MHz for 2m Bunny-hunts.
Click to expand...

We call it 'DF Hunting' over here

I built a similar design, but using wooden dowels, and 300 ohm balanced feeder for a folded dipole, with rubber bands to hold it all together.

The reason for that construction method was that I was on a motorbike, so needed something easily and quickly put together and taken back apart - and to stuff inside my coat
PIC programmer software, and PIC Tutorials at:
http://www.winpicprog.co.uk
M

Thanks guys - all very useful info and some great ideas. I'll keep you posted.

F
Does the DALI lighting comms protocol require all to have RX/TX capability?