Novice has no clue - trying to wire a homemade status board

Hello all, let me admit up front that I have NO clue how to find this if it already exists and even less of a clue how to create the circuit needed but here’s my project.
The current set up is like this: a 3 position on/off/on toggle switch that is wired to a red led and a green led. I have these mounted to a project case (total of four switches in four sections. I’m using this for a status board for fire/ems units. The dispatcher flips the toggle switch to change the status of each unit. Example, when the toggle switch is in the middle/off position, the unit is in quarters available for a call. When the unit is dispatched to a call, the toggle switch is flipped up and a corresponding red led is illuminated. When the unit clears the call, the toggle switch is flipped down to the second on position and a green led is illuminated telling the dispatcher that the unit is available but out of quarters or on the air. And we circle back around to when the unit calls in quarters the toggle switch is flipped back to the middle/off position. It’s a simple albeit antiquated method of tracking the status since we aren’t computerized or CAD based and it does the job for the most part. However, the current set up has reached its max capacity and since I need to build a new one to include a recent expansion and subsequent additional units, I would also like to add another status light to each position totaling three lights and off requiring a four position switch.
This is the current project. I’d like to have four push button, each corresponding to the three leds and the fourth being off. I know there’s a way to make it turn on the light associated with each button and if a different light was already illuminated, by depressing the new selection it would automatically turn off the previous selection while illuminating the current one. Since I tend to lose people when trying to explain this here’s another example. Let’s say unit 1 has a green light illuminated in their column, the dispatcher assigns unit 1 to a call, the dispatcher presses the button corresponding to the red led and the green led turns off at the same time the red illuminates. This would work the same for all four buttons, the current selection would cancel out the previous.
If I haven’t confused you guys (and gals) by now and this makes sense to you, any suggestions on how to actually make this work would greatly be appreciated. Keep in mind I have no clue other than 12 volt has a red positive and black neg is about the extent of my electrical/electronics knowledge but I'm more than willing to learn if it’s kept simple. If all else fails, I’ll ditch adding the third light or fourth position and stick to the three position toggle switch.
Can anyone shine the light (pun intended) on solving this issue ?
I have included a picture of the current status board, upper left corner. Sorry it’s not a closeup but it’s the only picture I currently have.

Most Helpful Member
What you want is often called a "radio button" circuit, from radio channel selectors where pressing one button releases any other that's already pressed.

This page gives an example concept, using CMOS inverters such as CD40106

It can have many identical sections as you need.

Each output would connect to a LED with a resistor in series.

The "reset" button would only need the button and lower diode, not the upper diode and pair of inverters that form the latch.


It works by any button feeding power though the lower diode it connects to, to the resistor and capacitor circuit.
That sends a very short puse to the top connection, turning off all latch sections.

But, whichever button is pressed is continuously turning on the latch it directly connects to, via the upper diode.


It does have a design problem as drawn - the diode circuits have to totally short-out the inverter outputs for a fraction of a second to make it switch.
Adding a resistor (eg. 10K) between each output and the diode it connects to would be far better.


Note that the diagram does not show the power and ground connections to the IC, which would come from battery (or power supply) negative and the positive from the on/off switch.
It could work from anything between 5 and 12V, just needing appropriate resistors to drive the LEDs.

Use high efficiency / ultra-bright LEDS as the IC can only supply a few milliamps, it would need an additional transistor or some form or driver adding for each indicator if you need a higher current output.


One 40106 IC has six sections so would do a complete three LED indicator.

Good morning rjenkinsgb,
I thank you for taking the time to reply as well as the information you provided but I have to be honest and say that I’m completely lost. You may as well be speaking Chinese as both are completely foreign to me. I pulled up the link with the wiring diagram and it’s just as confusing as the Chinese. I had a feeling I was getting into something way over my head and I would have to say I was right. When I say I know absolutely nothing about circuits, resistors, terminal bocks and the list goes on, I wasn’t exaggerating. Again, I thank you for your reply but it’s going to dictate that I stick to the 2 light with a 3 way toggle switch setup currently in place lol. It was worth a try. Wishing you good health and a happy life.

You could use simple mechanical buttons, as with the original "radio buttons" concept.
They are not as common as they used to be, but you can still get them on ebay - eg. 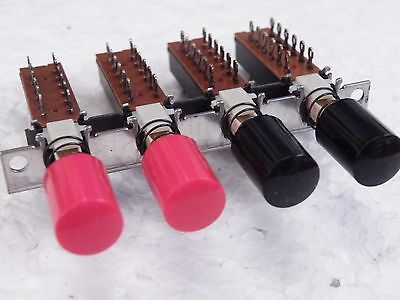 Just use a contact on each to feed your indicator LED via a resistor.


Edit - a lot more at some electrical surplus places, eg.

Just make sure they are interlocking and not individual on/off switches in a bank.

The red & white "4 Button Bank 3 Position + "Off" " one half way down the page looks particularly suitable, at $3 each!

Most Helpful Member
I used to know these a while back as schadow switches.
Red to black, black to red and blue to bits.
K

From this, a Radio switch will not work. Pressing one cancels the others. 4 "indepentent" switches for the status of 4 people. Or are you thinking of 3 separate radio switch buttons for each of the 4 individuals. If so, seems like four SPDT center-off toggle switches would be the simplest and infinitely expandable. One switch, two resistors, one red LED, one green LED, and DC suppy that will handle the current.
Ken
"To invent, you need a good imagination and a pile of junk."
Thomas A. Edison (1847 - 1931)

Most Helpful Member
You missed the second half of the original post:


Chief86 said:
This is the current project. I’d like to have four push button, each corresponding to the three leds and the fourth being off.
Click to expand...

Most Helpful Member
I'm not sure Schadow (later ITT Schadow) invented this type of gang switch, but the were/are a major player in that space. I agree with rj - an all-mechanical solution seems best for this user.

Unless you want to go with three 555's and one PIC per LED bank. (Sorry, Chief; that's an inside joke)

Most Helpful Member
I remember a signal generator project back in the 90's that did this electronically using momentary pushbuttons, it actually used a 555 and a 4017.
Red to black, black to red and blue to bits.

dr pepper said:
I remember a signal generator project back in the 90's that did this electronically using momentary pushbuttons, it actually used a 555 and a 4017.
Click to expand...

That sounds more like a circuit for stepping through a sequence of actions with a single button, like turning a rotary switch. I think that circuit has been independently discovered 6.023 zillion times over the decades.

Hello again everyone,
I truly appreciate all of the suggestions and while I’m sure all of the suggestions made would work for my project, I wasn’t exaggerating when I said I don’t understand any of this so having to do anything beyond purchasing something that’s already made to perform the specific task needed, it won’t work (for me) however, after contacting one of the many manufacturers of push buttons and switches, they suggested I contact the local college and see if I can recruit an electronics major that might be willing to take this project on. So, I thank you all once again for your attempts to help but knowing my limitations I think my best option would be the local college. Wishing you all a pleasant day.

Most Helpful Member
Do you want to use the same LEDs you are using now? If so, do you know the manufacturer / part number / distributor?

Separatee from that, are you considering using pushbutton switches that have the LED built-in?

You mention 12 V in your first post. Do the current circuits run on 12 Vdc?

Most Helpful Member
Because you described the application so well (gold star), a "standard" radio button approach can be simplified. Little millisecond-long flickers in the LEDs, caused by contact bounce in the switches, can be ignored because a human knows the only thing that matters is the final status.

Separate from that are the LEDs and whatever drives them. This gets into what the system power voltage is, how bright you need the LEDs to be, and how much current the LEDs need for that brightness.

Most Helpful Member
Question to the group: Is the CD4042 a "transparent" latch? That is, in one clock state does the output follow state changes at the D input, and then in the other clock state the output is frozen? Part of the operational description sounds that way, but it's been too long since I've actually used one.

AnalogKid said:
Question to the group: Is the CD4042 a "transparent" latch? That is, in one clock state does the output follow state changes at the D input, and then in the other clock state the output is frozen? Part of the operational description sounds that way, but it's been too long since I've actually used one.

Reading from the first paragraph on the linked datasheet, it says "The outputs follow the data input providing the Clock and Polarity levels [are x,x]"

But I'll let you read it to make sure that's what you're asking.