How to test which component failed?

Hi, this module of the car has failed and does not activate electric motor although it responds to master computer of the car.
So I wonder which component could have failed in it? 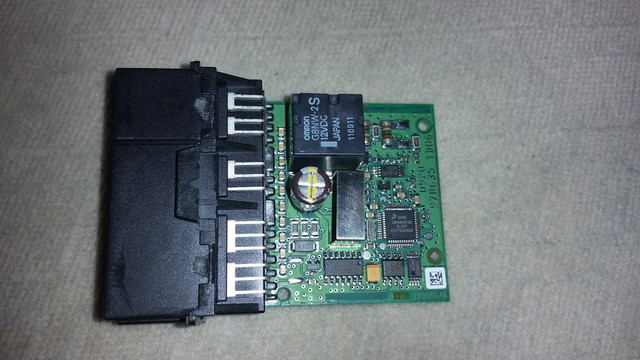 Which components are most oftern known to fail in circuits? Is it relay which failed? Could I test components while they are in the circuit?

Most Helpful Member
You can't really test components when they are in the circuit. It's also difficult to tell is the relay failed because, although you can hear the relay switching, it doesn't work then it might be whatever is controlling the relay (which is the rest of the board). You could remove the relay from the board and test it though. It's big and easy to work with and you have a big part number on it so you can find a replacement. If it's any other component that is not working, you're probably SOL.

You could go for a hail mary and measure the resistance across the large electrolytic capacitor with the circuit unpowered and see if it reads a short-circuit (5-10 ohms or less). If it does, it probably means one of the chip-sized decoupling capacitors on the board as failed. Since they usually fail short-circuit since they are all in parallel. These capacitors would be most of the ones that look like look like the vertical row of components on the left side of the PCB as well as the one large orange block in the middle-bottom of the PCB between the 16 and 8 pin ICs. The large electrolytic would look puffy or be leaking if it was damaged.

The problem is that since they are all in parallel, the only way to find the bad one is to remove them one-by-one until you run into the bad one.
Last edited: Apr 8, 2019
H

Electrolytic capacitor seems to be fine visually and also when measuring resistance it does have resistance and it seems its rising (I guess capacitor is charging while I measure?).

So next guess would be relay? It has 10pins so it wont be easy to remove it from the boars...

Most Helpful Member
I suppose you could power up the circuit, find where the voltage pins are and manually run them from wires straight to the appropriate pins corresponding to the relay coils (check the datasheet) and add any external resistance that might be necessary if the voltage is too high for the relay to take as is and try to hear if it clicks or not. It does carry risk though since you're injecting current into part of an unknown circuit.,

Most Helpful Member
You are also assuming that a component failed. This is an automotive device so it could also be a cracked solder joint caused by vibration or thermal cycling. It could be a loose connector, it could be an oxidized connector pin. Who knows. But, understand the cost of a replacement part. Sometimes, a new one is simple, cheaper (when you place any value on your item) and safer.

.
.When you're dead, you don't know it, the pain is only felt by others. The same thing happens when you're stupid.

Most Helpful Member
The best way to check stuff like this is to use a scan tool, better ones are bi directional and you can operate relays and the like manually to check the circuit.
Red to black, black to red and blue to bits.

A
Which component is this?

Aug 2, 2011
KeepItSimpleStupid
K
E
Which component to detect any changes on analog circuit?