Float switches in series and a relay on a timer to trigger a pump.

Hi all,
I'll just take a bit of time to explain what I am trying to achieve. I am a novice when it comes to electronics, and only have very basic knowledge, so any help at all would be awesome.

I would like to build a 12V circuit which detects a rising water level (using a normally open float switch) in order to trigger a small pump to take periodic water samples (pump on for 5 seconds, off for 600 seconds), for as long as the float switch it closed. When the float switch falls back down (i.e water level decreases) i want the cycle of sampling to stop completely until the next time the float switch is raised.

Additionally, I want a normally closed float switch located in a container which the water is pumped into in order to detect when the container is full and cut the power.

However, i seemed to have blown up the N/C float switch after about 10 operations of the cycle. I don't believe it was a faulty switch, so I have i overloaded it or something? the switch is rated to 1A and the pump only draws 350mA, so i thought it would work.

Apologies for the long post, I'm hoping someone can give me a bit of help with this. Any tips about how to achieve the above would be really appreciated.
Thanks, Chris

Most Helpful Member
A motor that draws 300mA running probably pulls a couple amps at startup.
I am using a float switch like the picture. It is built for 120/220vac but DC will work. I am using a 1 horse pump.

I do not understand the need for two switches.
C

Thanks for the quick reply.
The scale of this project is quite small, so my float switches look more like the below picture.
The container i am filling will only be about 1L, and is located inside a waterproof compartment. I need to cut the power once this container is full so it doesn't overflow. The other float switch (N/O) is located outside the compartment on the ground. When rainfall causes the water level to rise, it is triggered and begins to fill the container using the cycle of 5 seconds on, 600 seconds off. Once the container is full, I need the power to be cut so that the bottle does not overflow.
For context, I am trying to create a device that takes a composite water sample of agricultural runoff to determine what chemicals and nutrients are moving into nearby waterways.

I suppose it is like a High/Low level system for a water tank, however the low level float switch is located outside the tank. 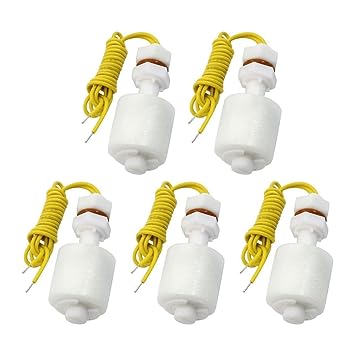 Most Helpful Member
So thats whats in them float switches with a ball inside.
Red to black, black to red and blue to bits.

dr pepper said:
So thats whats in them float switches with a ball inside.
Click to expand...

Yes, I replaced a round float switch last year (like the one in post #2, with the blue circle on it), I obviously cut the old one open, and it was just a steel ball and a micro-switch. Needless to say I kept the ball, for no good reason I suppose, but it was too nice to throw away
PIC programmer software, and PIC Tutorials at:
http://www.winpicprog.co.uk
W

A wiring diagram would help ,but it seems like you are passing the full motor current though the float switches which is not a course I would take.

Having the floats as inputs only to whatever your timing device is always a better way.

My approach would be to use a cheap Arduino Nano clone board , around £3 and just use some simple coding to produce the actions you need, driving the motor with a simple transistor and/or relay.
That would also use a lot less current than the module you show, so meaning longer battery life.

Also if using something like the Arduino means you can also readily use some of the more modern fluid level devices like these two below, which having no moving parts so possibly more reliable .

The optical one is accurate to about 1.5mm and the stick-on external one is about 3-4mm. ( using them myself).

Most Helpful Member
I've changed a few but never cut one open, but I will next time, ball bearings are handy for making gaskets.
Red to black, black to red and blue to bits.

ChrisTD5 said:
I have a different timer relay module which has a "trigger in" terminal. I wired the float switch into this terminal and the trigger worked, however when the float switch became open (water level decreased) the cycle continued. It only stopped after the float switch was triggered again.
Click to expand...

Try adding a 10k ohm or so resistor from the trigger input to ground.
Zapper
Curmudgeon Elektroniker
--The important thing about having knowledge is knowing where it correctly applies..--

crutschow said:
Try adding a 10k ohm or so resistor from the trigger input to ground.
Click to expand...

I've seen this happen with CD4066s and the logic input not shutting down.

Reminds me of grid leak in a vacuum tube.
Greet Arrogance with Flatulence.

dr pepper said:
I've changed a few but never cut one open, but I will next time, ball bearings are handy for making gaskets.
Click to expand...

If you've got a catapult they would make great ammo
PIC programmer software, and PIC Tutorials at:
http://www.winpicprog.co.uk

LOL A Wrist-Rocket comes to mind.

hi, yes just like post 3 i set up a ebb and flow system using 2 of those 5v float switches an uno and relay board and 120v hardware such as power cords an plug sockets ... for larger pumps but would also work for smaller

i use the uno to time the flow cycles and debounce the switches ... without debouncing the switches are sensitive and the small waves cause the relays to go crazy
also i put in a wifi module for remote access and a status LED/.../the code could be simply modified to your purposes

Most Helpful Member
There's a simple, cheap solution to your problem.

Go back to your original arrangement of float switches and timer, but instead of switching the motor directly, connect a small 12 volt relay in place of the motor and use the relay to switch the motor.

Also, install a reverse-biased diode across the relay coil to kill back emf. Anything will work for this, including a simple 1N4148.

5
Help - need to a circuit to trigger relay

M
Multiple caps on one supply and in series
2

Relay timer 2 min on and 10 min off, and repeat constantly.