I want to replace the bearings in my washing machine motor but I'm having difficulty in getting the screws / tie rods out.

Does anyone know what they are actually called and how to get them out without ruining them.
One of them is down a 30mm hole so not exactly easy to get at.

Thanks to anyone help

Most Helpful Member
I've never seen those and I cannot find anything like them..

An "extractor socket" may work, in the appropriate size - eg. this style? 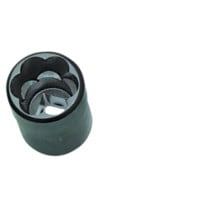 Washing machines are known for 'special' tools to remove items, I had to buy one to remove the tub.
You may have to end up fabricating something as a last resort. unless you can find one that is sold for this purpose.
Max.
V

You could cut them, and replace them with long bolts or "all-thread" rods.
S

Most Helpful Member
Or make a socket to fit. Take an old small size socket and grind a slot in the hex end to fit the screw. Use an angle grinder with a cutoff wheel for the job.

They are known as Double 'D' sockets with a limited size range. Unfortunately, hard to find - the set I have is about 30 years old.

You may have some luck with german car parts outlets because they were used shock absorbers / struts at some point. Bilstein ??

Hope that helps, but probably not much !

Musicmanager said:
They are known as Double 'D' sockets with a limited size range. Unfortunately, hard to find - the set I have is about 30 years old.
Click to expand...

Interesting to know, I've never heard of that before.
PIC programmer software, and PIC Tutorials at:
http://www.winpicprog.co.uk

Not so much now, but for some reason and some years ago, they were all over the commercial laundry machine business. A bit of a nightmare too, because the 'lug' has a habit of snapping off under not too much stress !

There is some link with german car suspension, although it's so long ago that I looked, I've forgotten what or where. The name Bilstein sticks in my memory for some reason and they made/make shock absorbers.

Musicmanager said:
They are known as Double 'D' sockets with a limited size range. Unfortunately, hard to find - the set I have is about 30 years old.

You may have some luck with german car parts outlets because they were used shock absorbers / struts at some point. Bilstein ??

Hope that helps, but probably not much !

That's how I knew to make one from an old socket. It doesn't need to be the real shape of the screw head, just a slot clear through the end of socket will work.

Musicmanager said:
There is some link with german car suspension,
Click to expand...

Look at the pic below:

This fine piece of scrapbinium is the centre rod from a VW Golf mk2 shock absorber.
If memory serves correctly ( ) I used a small open end spanner or mole grips to hold the thing while undoing the fixing nut.

More modern cars (Mazda MX5 in this case) tend to do it like this:

with a hex for an allen key.

As for clives' electric motor, I suggest cutting a slot in the end of a piece of rod or an old bolt.
Using a milling machine/angle grinder/hacksaw, whatever you have available in your workshop.

Happily retired and playing with my big boys toys every day.
C

I managed to get the screws out using a tool I made from some ¼ inch square bar, having said that I could only dismantle the motor so far, as the shaft at the end where the v belt sits is 20mm diameter and the bearing 6202 only has a 15mm bore.
I assume the bearing was fitted before the amature went on?
Take a look at my pic.

Just out of curiosity does anyone know what the bush is for at the other end of the shaft, you can see from my picture its splined on, I think its plastic.
I didn’t bother trying to take it off to avail removing the bearing, as I would not be able to remove the other one so not much point really.

Most Helpful Member
I don't know about the plastic bush, I have never seen that before.

As for the 20mm part of the shaft (a drive for a poly-V belt?), could it be that that is simply a shrink fit on the end of the motor shaft?

Happily retired and playing with my big boys toys every day.
L

Most Helpful Member
My guess would be that the "bush" is actually a magnet that is close to a coil when the motor is assembled. The coil would generate pulses at a frequency proportional to the speed. This is used to close the feedback loop an a speed controller. The ones I have seen in the past seem to be more like a powdered iron material rather than a ferrite like material. Can you see a pickup coil close to the bush on the motor housing ?

Appears to be a Universal motor, Motorola developed an IC specifically for the control of these motors, as without it, they normally run with uncontrolled RPM, only limited by load/friction etc.
The IC TDA1085 required a digital feedback off the shaft of 6 -8 pulses.
The only other object I have see like that was a brush made contact with it in order to earth GND the armature on T.M. DC motors.
Max.
C

Les Jones
I think you could be right about the bush being a magnet, I did have to brush some metal filings off it but didn’t think anything about it at the time.

I’ve included a few more pictures maybe you can tell what it is from them.

For all your replies, for now I’ve assembled the motor back together.

The bearings aren’t that bad at the moment so it can run on for a little longer before I’m in the market for a new motor.

I’d stripped the washing machine down mainly due to the awful noise it was making when spinning and I found the drum bearing completely shot, in fact I’d only renewed them 18 months ago.

They were purchased together with the drum bearing seal, a small kit from a white goods spares place on the internet, the bearings had no brand name on them so no doubt some cheap import rubbish.

While I’d got the machine pulled down I just thought I’d have a gander at the motor bearings at the same time being as the machine is 19 years old, no doubt Hotpoint now Whirlpool are saying absolutely disgusting you have no business owning a machine that old

The fact is at least I can split the tub to fit new bearings unlike the new machines all nicely sealed up so when the bearings go its more than likely cheaper to go out and buy a new machine.

I also believe the bearings are smaller on the new ones, a good combination that, sealed up and smaller bearings.

I have seen a few videos on youtube of people sawing the tub in half to fit new bearings but as I have one where I don’t need to do that, I’ll stick with it as long as I can.

At the moment I thinking of getting some SKF bearings but I’m not sure about the seal, the ones which come with the rubbish bearing kits are bit different to what I can source, another pic for you.

clive2016 said:
While I’d got the machine pulled down I just thought I’d have a gander at the motor bearings at the same time being as the machine is 19 years old, no doubt Hotpoint now Whirlpool are saying absolutely disgusting you have no business owning a machine that old
Click to expand...

I've got 70+ machines of varying size, spread across 4 sites most of which were USA or Canadian import new in the early 70's. As you've noticed with your machine, the big advantage of these machines is that they are completely 'bolt together'. If something fails, it's easy to remove and replace a single component. Some of the drum bearings cause a little angst at times, mainly due to the size, but apart from that, maintenance is quite straightforward.

Ref: drum bearings wearing quickly .. .. .. .. try measuring the diameter of the drum at two places right angles to one another; they need to be very closely similar dimensions. A common failing is to take out the drum and lay it on it's side which should never be done - always on it's end. When the drum is split and then laid on it's side it distorts the balance which will stress a new bearing in no time at all.

W1613001401 is a standard oil seal number common to many machines, you shouldn't have any difficulty finding a replacement.

I shouldn't have difficulty finding a replacement seal W1613001401, all I can say is Iv'e just tried a Google search and all I can tell is they are knocked out in China and can't see any retail outlets.

Looks to me if I want one the same, I will have to buy a bearing kit and then stick the bearings on a shelf to gather dust, then buy a couple of quality bearings.

I have to admit I'm more use to seeing seals like the ones in the picture so I'm not sure why the rubber needs to be in a piece of tin, unless of course if it’s something to do with the difference between the inside and outside diameter sizes 72mm down to 35mm?

I think most of our seals come as a kit with the bearing so we're not used to buying seals alone either. It might be worth checking the bearing number to see if it is available with a seal kit.

Alternatively, www.ukseals.com will probably have a suitable seal but they may not recognise the number; you'd need to give them the dimensions from your sketch above. They are helpful folk.

clive2016 said:
While I’d got the machine pulled down I just thought I’d have a gander at the motor bearings at the same time being as the machine is 19 years old, no doubt Hotpoint now Whirlpool are saying absolutely disgusting you have no business owning a machine that old
Click to expand...

Unfortunately you've got a cheap and poorly made machine, which fail a LOT - I would suggest buying a decent quality one rather than wasting time and money patching up one that's just going to keep going wrong.

We sold lot's of Bosch machines, and they were incredibly reliable - but don't go for the bottom end ones, which were made in Spain.
PIC programmer software, and PIC Tutorials at:
http://www.winpicprog.co.uk
You must log in or register to reply here.
Share:
Facebook Twitter WhatsApp Email Link