I was trying to gather some resources on designing an Electrical Conductivity (EC) sensor that for instance, I could connect to an Arduino board.

I saw many people on YouTube just using two electrodes and some wires and simply connect them to analog pins of the Arduino board. I do not have much knowledge in electronics but it seems to me that this way of building such a sensor is very unreliable and probably requires that you calibrate the sensor quite often.

I understand the principle behind measuring EC: basically measuring the resistance between the two electrodes.

However, I was wondering if there's a "better" way to design such a sensor. I could not find many sources online myself, perhaps anyone who could help me out here?

A schematic would already help.

Thanks a lot!
P

Most Helpful Member
Normally, EC is expressed as it's opposite, resistance. The "normal" way to measure resistance with a uC is to charge a capacitor via the resistor and time how long it takes. So, I/O pit to resistor, resistor to capacitor and capacitor to ground. Another I/O pin to the junction of resistor and capacitor. Set first I/O pit to logic high and time how long it takes for the second I/O pin to register logic high. Will definitely need some calibration.

Most Helpful Member
Are you trying to measure the conductivity of metals and semiconductors (low resistance) or poor conductors/insulators? The circuit and strategy will be very different. Let us know the range you are looking for and how many decimal places of accuracy you're hoping to see.
.

Thanks for the replies.
I am trying to measure the conductivity of soil in order to estimate the VWC (volumetric water content). Simply put, I am looking into measuring the moisture levels of soil.

Accuracy is important to a certain extent as plants do not really care if they have plus or minus 5% percent moisture level.

Since I am looking at soil the capacitor method would still work?

gapansi said:
Thanks for the replies.
I am trying to measure the conductivity of soil in order to estimate the VWC (volumetric water content). Simply put, I am looking into measuring the moisture levels of soil.

Accuracy is important to a certain extent as plants do not really care if they have plus or minus 5% percent moisture level.

Since I am looking at soil the capacitor method would still work?
Click to expand...

capacitance seems to give less corrosion issues than resistive methods. With capacitance, you are looking for the presence of water because of its high dielectric constant (70) vs air (1) or clay/soil (~10-20). Commercial products exist for diy at a very good price (search Amazon for capacitive moisture sensor). Perfect for connecting to an Arduino.
.

I saw many capacitive sensors already made for Arduino. However, I was trying to dive into something a bit more sophisticated like these two sensors here: EC-5, and TEROS-10.

I am sorry but I am fairly new to electronics, so it could easily be that I sound like I don't know what I am saying or that I am not too clear about what I am asking.

I also do not really understand how they go from an EC value to a VWC (Volumetric Water Content) but I guess this is another topic.

Most Helpful Member
Relaxation resistor/capacitor oscillators (I.e. signal generator) will change frequency when the resistor or capacitor value changes. The capacitance of the probe changes when water volume changes because water has a different dielectric constant than air or soil and changes the frequency of the sensor's relaxation oscillator.

A filter circuit senses if the frequency is above/below a given threshold.
.

Alright, thanks for the explanation.

So for instance when looking at the TEROS-10, how is it actually working in your opinion? These sensors require very low power and energy consumption.

I am trying to reverse engineer this sensor and try to build something similar, but of course, the precision does not have to be that high.

Most Helpful Member
The Teros-10 sensor claims to be measuring permittivity at 70MHz, not simple conductance or resistance.

For what you need, a simple AC-fed resistance measuring circuit should be OK.

In principle, use an oscillator to generate a signal with a known amplitude and frequency, eg. a few KHz.
Feed that through a series resistor and capacitor to the "live" probe, with the other probe connected to circuit ground/common.

Connect another capacitor to the live probe, which feeds an active rectifier circuit.
The output of that (which you can connect to an ADC) will be proportional to the ratio of the resistance between the probes to that plus the fixed series resistor - they form a potentiometer-type divider.

The capacitors need to be non-polarised, eg. polyester, and a value large enough to have relatively low impedance at the frequency in use, compared to the circuit and test probe sample resistances.

With an appropriate value of series resistor, dry soil will cause little reduction of the rectified signal, saturated soil will reduce it a lot.

The AC source ensures there are minimal or zero electrolytic effects, but you still need to use stainless steel probes to avoid corrosion.

We have used that basic setup in a few devices for liquid level sensing.
You could use an MCU PWM output for the signal source, then a dual opamp for the active rectifier.

rjenkinsgb said:
For what you need, a simple AC-fed resistance measuring circuit should be OK.
Click to expand...

Since it is a hobby and learning, "need" is not the right word, especially since he specifically said he wanted to try a "capacitance" method.


gapansi said:
Since I am looking at soil the capacitor method would still work?
Click to expand...

The changes to capacitance are quite small because the size (area) of parallel capacitive plates is quite small for a PCB etched capacitor. To get measurable frequency changes from the very small capacitance changes, high frequencies are needed. That is why, as rjenkinsgb mentioned, the one posted uses a signal in the range of 70MHz. It can become a challenge but, with some work and digging, it is possible.
.

Most Helpful Member
The commercial device does not use simple capacitance, as the probes are conductive not capacitive (insulated).
Either the advertising material is pure waffle, or it does some complex measurements using different frequencies to calculate permittivity.

For conductive materials, you cannot just put a sample between conductive plates to use it as a dielectric.

See the article here and frequency spectrum plot part way down the page: 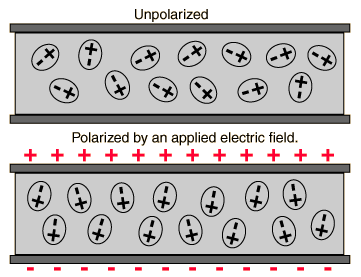 The original question and the target of measuring soil water content both fit a simple resistance measuring method.

Most Helpful Member
No, but you can use an LM393 (dual comparitor) to make a relaxation oscillator, (1 comparitor) and a detector/filter with the second. Use the capacitor on the relaxation oscillator as the sensor and measure a 15x to 70x change in capacitance as water flows between the traces instead of air or soil. There, a permittivity measuring device.
.
You must log in or register to reply here.
Share:
Facebook Twitter WhatsApp Email Link