Does Skin Effect Increase With Voltage?

Here's a simpler, better question, than my original question .

Will these two sines experience the same percentage power loss on the same wire due to skin effect (passed separately, not at the same time) .

Assume a wire has a given skin effect depth at a particular frequency.

Scenario 1: One such wire. We send a bipolar AC current at that frequency, at a particular peak to peak voltage amplitude down that wire. Due to skin effect, it will have a particular impedance, and thus a particular power loss.

Scenario 2: Same such wire, identical to the above wire. Identical AC current. Except, we're sending the positive half ONLY down the wire. Ie, half rectified.

Will the 2nd scenario suffer the same power loss (due to skin effect) as the 1st scenario? As a percentage of the original, not as absolute amps.

Here are the two scenarios: 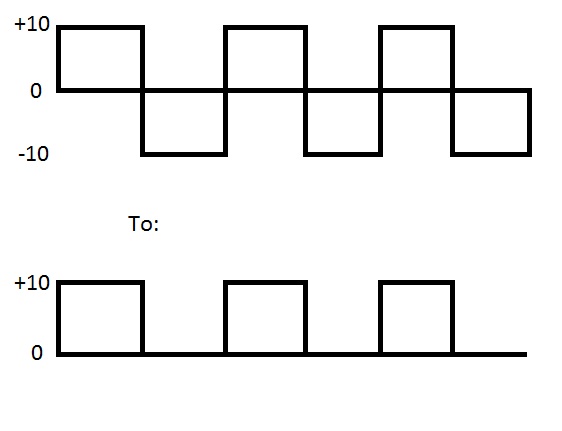 Most Helpful Member
No. Because scenario 2 has half the time being 0Hz transmission, and the portion during the half-wave has different frequency (higher) components than scenario 1.
J

dknguyen said:
scenario 2 has half the time being 0Hz transmission
Click to expand...

the portion during the half-wave has different frequency (higher) components than scenario 1.
Click to expand...

Regular sine waves and half-rectified sine waves do not have the same harmonic content. The full sine wave just has one frequency component. The half rectified sine must have more. Think about what is required for it to go from flat DC into the sine-hump and back to DC again.

A fully rectified sine is also different from a regular sine wave.

Unipolar and bipolar square waves of the same zero-to-peak value sort of do but the magnitudes of the components are different (since 0Hz is different and the peak-to-peak is also different.

"different"
Will the 2nd scenario suffer from exactly half the power loss?

johnyradio said:
"different"
Will the 2nd scenario suffer from exactly half the power loss?
Click to expand...

No. I wouldn't make generalizations like that. Look at the difference in frequency spectrums in my previous post. Different frequency components means different flow depths which makes things nonlinear. Rectification on its own is already a nonlinear operation.

ok, le'ts assume we're talking square waves. Therefor, both scenarios are the same waveform, just different height, and one is bipolar, the other unipolar.

Most Helpful Member
Same zero to peak value? Or same peak to peak value?
Either way, you'd have to integrate the skin losses in the wire geometry over the skin dept over the fourier spectrum of the waveform . Triple integration at least.
https://en.wikipedia.org/wiki/Skin_effect#Current_density_in_a_round_conductor

Can you ballpark it?

johnyradio said:
Can you ballpark it?
Click to expand...

No. This is really a job for a simulator.
J

Ok, but whether sine or square, there's less loss in scenario 2, right?

I don't think that's actually a fair comparison since the half-rectified wave has half the power.

But if you meant for scenario 2 to be a full-rectified waveform, then a fully rectified square wave in scenario 2 would have zero skin losses because it would just turn into DC.

I'm not sure that's true for the sine-wave because fully rectifying a sine-wave redistributes some of the energy to 0Hz which would reduce skin losses, but also introduces high frequency components that increase the skin losses. Looking at the area under the graphs I linked, it seems most of the area under the curve is pushed closer to 0Hz where there are less skin losses, but the rest of the area has been pushed to higher than the original fundamental where there are more losses so I can't really say for sure. If I had to guess I would guess the losses would be less for a sine-wave in scenario 2 as well, but that's extrapolating from the skin losses being zero in scenario 2 for a square wave.
Last edited: Nov 5, 2018
J

Thanks much for the detailed reply.

I mean half rectified.

I added images to my OP (original post) to show exactly what I mean. Does that help?

You mentioned the half rectified wave has half the power. No matter. The question is "will scenario 2 have the same loss due to skin effect". Meaning, as a percentage of the original.
Last edited: Nov 5, 2018