My 1998 Dodge Ram van has a faulty blower fan resistor, forbidding the blower fan from operating at slower speeds. I want to substitute a 25A mini blade fuse to replace the internal thermal fuse. My other option is a proposed 16-speed electronic circuit that uses a 4093, 4029, CA3140 I.C.'s, a heatsinked transistor feeding the fan, and the original fan switch and harness. The finished circuit will use the blower resistor base at one end of the PCB mounted in its case hole, with an additional hole drilled to hold the PCB inside the case near the transistor. There's a 30A blade fuse in the PDC under the hood. Am I playing with fire with this idea?

Most Helpful Member
Bit over the top - masses of IC's

A simple microcontroller would do the job much simpler, cheaper, and more effectively.

However, can't you just buy an upgrade kit? - I would imagine such things would be freely available?. 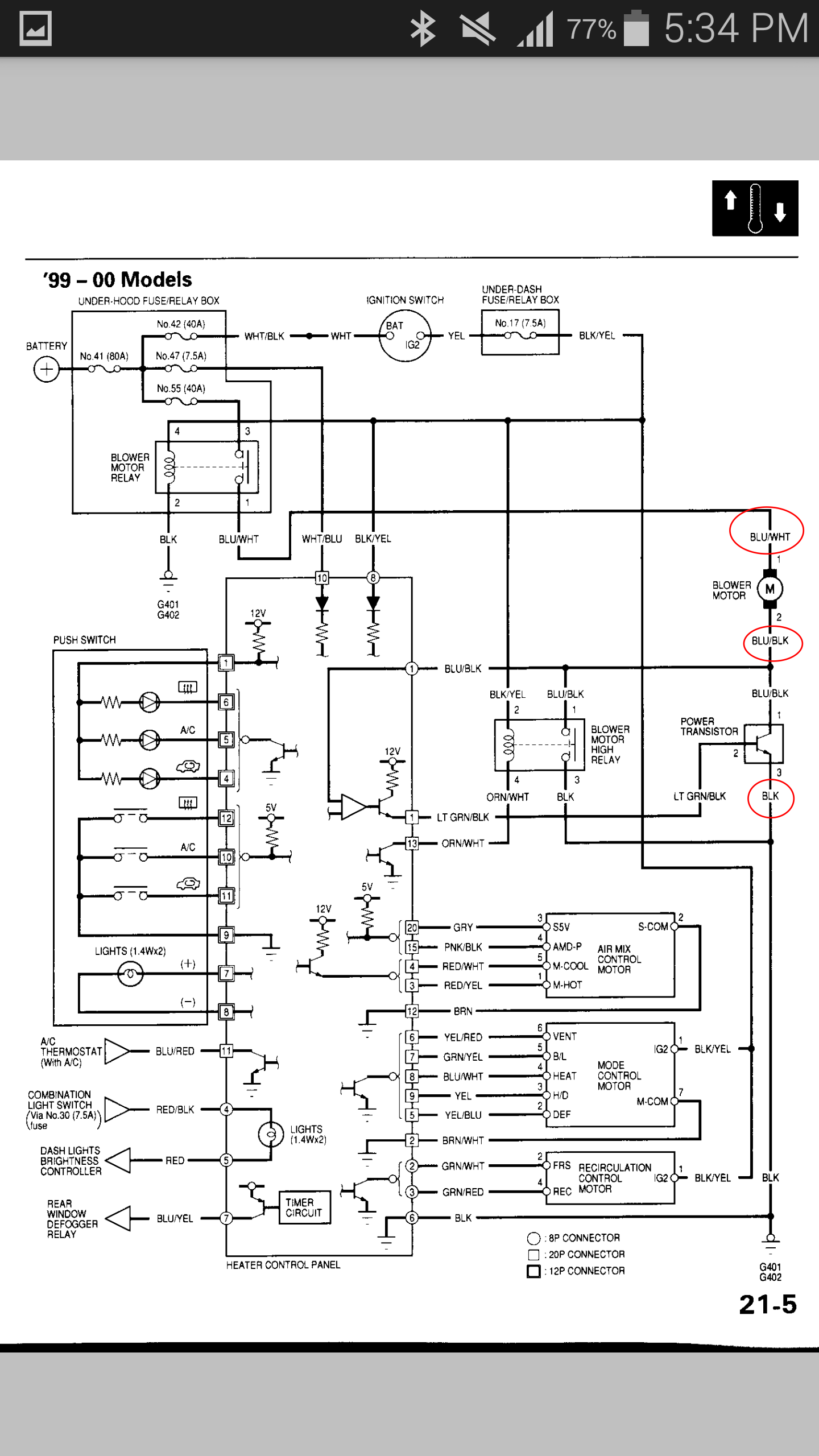 Retrofitting My Car AC Blower With Pwm Speed Control! : My Honda civic 1999 used a power transistor to achieve variable speed control of the AC blower motor. This is a wasteful technique since significant power is wasted across the bipolar transistor. I wanted an efficient means to vary the...

Well you can certainly do all of that. And you will still have the problem. The resistor opened for a reason........it overheated because the fan wasn't working properly. The fan has no bearings, bushings only. They have dried out causing the fan to run slower than normal at lower speeds. Next the fuse will open. Check youtube, for info on replacing the fan, you might get lucky and not have to open the "box" if in fact you must open it, replace the heater core at the same time, maybe even the A/C evaporator and verify the blend door is operating freely. You might wonder how I know all of this.............I have a 99 Cherokee, this is a common problem with them.
S

JMW said:
The fan has no bearings, bushings only.
Click to expand...

Most Helpful Member
I tried using a PWM Veleman motor controller on my blower motor and the motor sung.

it used a friction mount and on hot days it would falland the blades would hit the housing which blew out the brushes.. Thee manufacturer did make a kit to stop it, but it wasn't available anymore.

I got some generic brushes and modified both the brush and the holder to fit. Every once in a while in the summer, I would have to give the motor a shove.
J

The above is a forum for your truck. I glanced through it, and saw a couple of folks who have similar problems.
J

And your point is? zactly how does this help the OP?
S

JMW said:
And your point is?
Click to expand...

My point is they all use bushings not ball bearings, just like the motor in your home HVAC does, bushings are not noisy like a ball or other rolling element bearing.
S

After many design changes and circuit complexity, I've decided to replace the under-rated Microtemp brand thermal fuse ( unavailable in Canada) with a 25A mini blade fuse. The original fuse leads are less than a millimeter wide, and couldn't tolerate the fan current. I'll install thicker wire leads from my stock, bending them to accept a 3mm female crimp connector, and bend the fuse leads inside the shield. This should, in theory, keep the mini blade fuse from melting and give me all four intended fan speeds, not just full blast through a relay. The wirewound resistors kept their forms and didn't burn up and break from their posts.
I'll keep the proposed idea for a future motor project.
Last edited: Mar 2, 2021

JMW said:
The fan has no bearings, bushings only.
Click to expand...

That bushing is a bronze bearing.
It's just not a ball bearing.
Zapper
Curmudgeon Elektroniker
--The important thing about having knowledge is knowing where it correctly applies..--
K

I saw a motor speed control circuit online using an LM723 voltage regulator IC that could fit in my design - not yet tried.
B

The bushings will be sintered bronze bushings. You can bring them back to life by warming them up slightly and soaking them in oil. Using a blade fuse in place of a thermal fuse is not a great idea. The original works off heat which a blade fuse will not sense. For all the work it takes I would just replace the resistor block and repair/replace the fan motor. They are not expensive parts. You could change it to a PWM setup and close the hole or use an linear power module to tun your fan motor. A little over the top but it would work.
K

Most Helpful Member
I did try once, to replace drive the blower with a PWM module from Jameco. The motor sung. Very loose windings. I didn;t play with frequency and didn't play with "stiction". It might need a little more power to initially move.

The motor was held by "friction only" where gravity kept pulling the motor out during hot weather a few times a season.
Fix: Machine new brushes and shim the brushholders from an available brush at a vacuum cleaner repair place.

Give it a push, once in a while.

Good part about the resistor design is that it gets cooling and the failure mode is high speed. It also acts as a thermal fuse as well.
S

bwilliams60 said:
The bushings will be sintered bronze bushings.
Click to expand...

That maybe, but some of the newer motors in heaters have switched to sintered iron bushings, cheaper than the bronze and work as good. It's the oil film after all that is doing the work in them. Even some of the small DC hobby motors have gone to sintered iron, from what I could find the iron works better for high speed, low force/weight shafts.
You must log in or register to reply here.
Share:
Facebook Twitter WhatsApp Email Link