Overview Reviews (2) History Discussion
When a battery is paralleled with another battery or other source it is often required that uncontrolled back-charging be blocked. This can be done with diodes but even Schottky diodes will cause close to a half volt drop. This is especially problematic with low voltage batteries, where that drop is a significant percentage of the battery voltage, noticeably reducing efficiency and battery life.
To minimize this forward drop you can configure a MOSFET as an ideal diode, which has a very low drop in the forward direction (equal to the current times the MOSFET's ON resistance) while blocking the current in the reverse direction.
Discussed here are two circuits to perform that function.

Below is the LTspice simulation of a simple ideal-diode MOSFET circuit using all transistors.
The components are inexpensive, consisting of a P-MOSFET (for use in the positive rail) with a dual PNP transistor and two resistors. 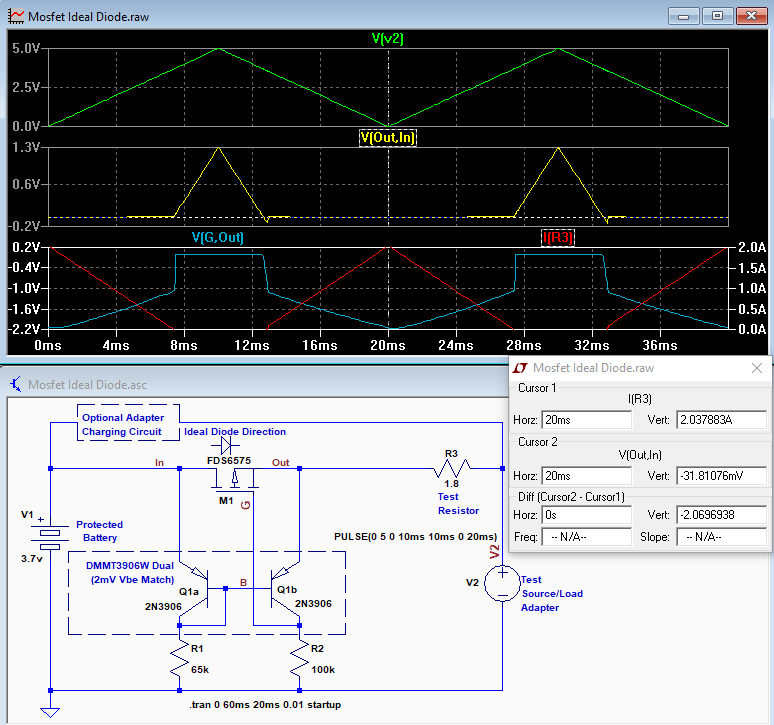 Q1 and Q2 form a current mirror circuit that act as a differential amplifier which responds to the voltage drop across the MOSFET. The indicated values of R1 and R2 cause Q2 to be on and thus M1 off (Vgs near 0V), when there is no voltage difference between the drain and source of M1.
The mirror has a gain of ≈130 from the two emitter's voltage difference input to Q2's collector voltage change output.

In the forward direction (output voltage lower than the battery voltage) the current mirror becomes unbalanced due to the difference in emitter voltages, causing Q2 to turn off, which puts the P-MOSFET gate near ground potential, turning it on. This allows current to flow from the battery to the output (left to right) with a low drop.
(MOSFETs conduct equally well in either direction when on.)

When the output voltage becomes equal to or higher than the battery voltage this voltage reversal across the MOSFET unbalances the current mirror in the opposite direction, causing Q2 to turn on.
This causes the MOSFET gate voltage to rise, reducing Vgs [V(G,Out) in plot], which turns it off and prevents reverse current flow.

The current mirror operation is fairly sensitive to any offset between the two transistor base-emitter voltages, which could possibly allow some current conduction in the reverse direction. It is thus recommended that a matched transistor pair be used, such as the DMMT3906W shown on the schematic (basically two 2N3906's in one package), which have their Vbe matched to within 2mV max and are thermally connected together.
(The simulation was done with 2N3906's which are perfectly matched in the simulation, unlike real life.)
The DMMT3906W pair are quite inexpensive, selling for U$0.37 here, for example.

The P-MOSFET selected should have an on-resistance small enough to give a low voltage drop when conducting the maximum battery load current.
If the battery voltage is less than 10V then a logic-level type MOSFET should be used which have gate-source threshold voltages (Vgsth) of less than 2V.

One of these circuits can be used at the output of each battery for however many are in parallel.

If it is desired to charge the battery, such as from an alternate power adapter voltage at the output, that can be done by paralleling the charging circuit (which may be just a resistor for some battery types) with the ideal diode circuit.
That way the battery can apply power with no voltage drop without the adapter, but the adapter can provide the load current and the desired charge current to the battery when connected.
-------------------------------
The circuit can also be used for momentary brownout protection of circuits, such as from a transient motor load on a supply also powering the electronics.
Typically this is done with a diode and capacitor to the electronics, but that can drop the normal operating voltage by a forward diode drop which may be unacceptable.
The ideal-diode allows the circuit to operate at full voltage, but still blocks the transient, allowing the capacitor to momentarily supply the electronics power during the supply voltage dip.
-------------------------------
Note that there is a reverse voltage limit of the circuit due to the 5V maximum reverse Vbe that can be applied to the BJTs.
This should not affect the discussed applications for this circuit which normally would not have the output be more than 5V above the battery/source voltage.
If a reverse voltage block greater than 5V is needed, then the circuit below can be used. It adds a resistor and diode to protect transistor Q1a from excess Vbe reverse bias.
It does add 10k of leakage in reverse bias, but that likely is not a problem for most applications. 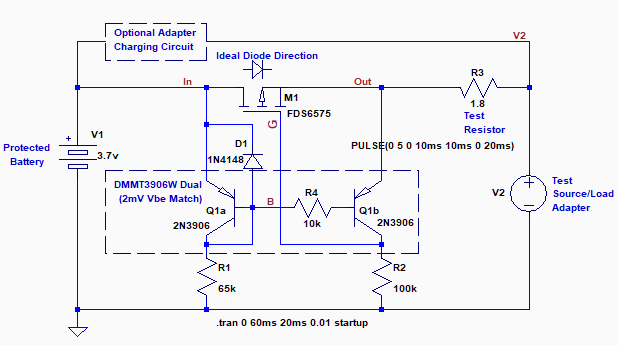 As an alternate design, here's an ideal diode circuit that uses a rail-rail op amp to control the P-MOSFET.
It has an advantage at higher voltages (over 5V) over the above circuit, in that there is no leakage in the reverse direction,(through R4).
The opamp monitors the voltage across the MOSFET source and drain, and when it reverses, indicating current is trying to reverse direction, its output goes high, reducing the MOSFET Vgs to zero, and shutting it off.

If the battery voltage is <10V, the the MOSFET needs to be a logic level type (Vgs threshold <2V max.).

The op amp must be an input/output rail-to-rail type.
The one shown is a relatively inexpensive, rail-rail, micropower (1μA) op amp, so draws negligible power from the circuit, and has an 18V maximum rating. 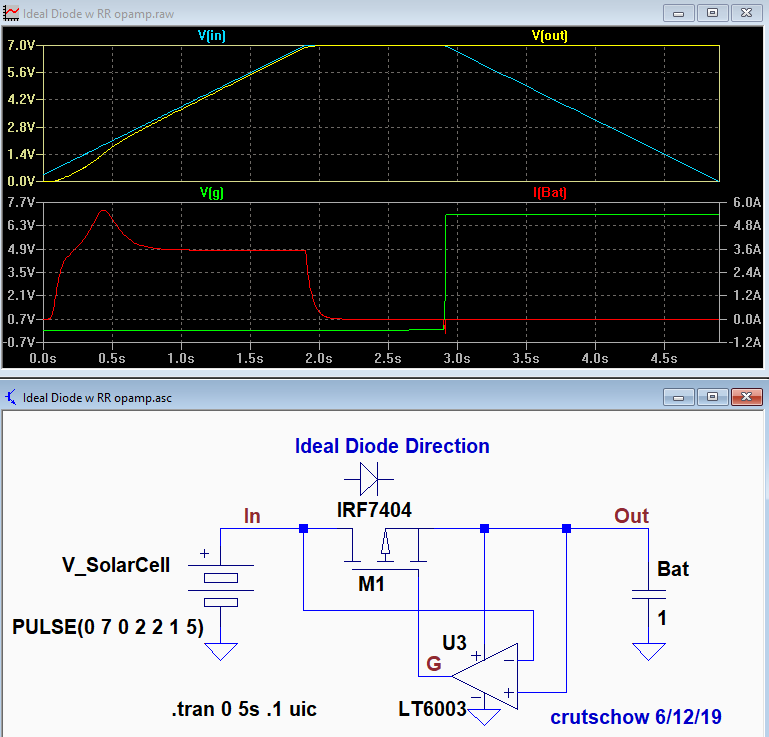 Thanks for this circuit, crutschow. It came in handy for a recent project in a circuit that needed to be protected against transients (using a large cap and a diode), and I couldn't afford the voltage drop characteristic of a normal diode.
Upvote 0 Downvote
Good info!
Upvote 0 Downvote
Read more…