Overview History Discussion
INTRODUCTION --
The Radio Push-Button has an interesting function, where pushing one momentary button of several gives a latched output representing that button, simultaneously cancelling the latched output from the previously pressed button.

This article discusses a simple circuit, using CD4049 inverters, that performs that function.
Similar circuits are posted on the web, but may not reliably trigger due to lack of isolation between the input and output of the latch circuit, which is added here.

The CD4049 allows operation from 3V to 15V supply voltage.

The circuit draws only IC leakage current from the supply when quiescent so can be readily backed up with a battery and a couple diodes if the button state needs to be preserved during power down.

DISCUSSION--
The circuit is shown below for three push-buttons (the circuit can be expanded as needed, of course).
Two inverters of the six in each CD4049 package are used in a feedback loop to generate a latch to remember the last button pressed.

OPERATION--
The simulation shows the operation for each of the buttons being pressed in various sequences.
As can be seen, the output for the button pressed goes high and any other outputs go low. (S1 through S3 with V1 through V3 are simulated push-button switches).

The circuit also shows a reset function operation to reset all the outputs to zero, if desired.
If not needed, push-button S4 can be eliminated 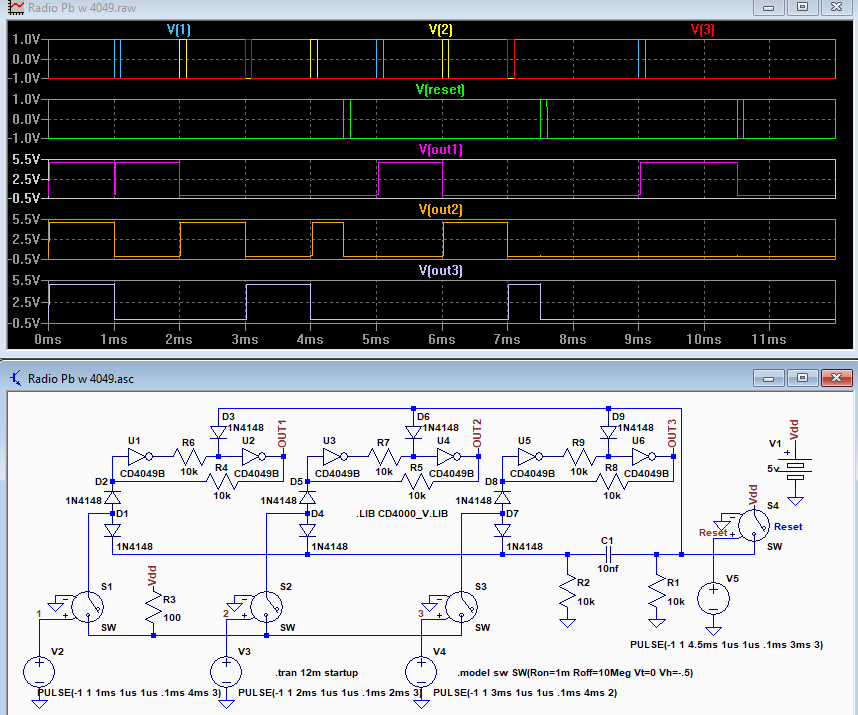 CONSTRUCTION--
The circuit can be expanded by duplication of the inverter latch circuit with associated resistors and diodes.
Each added button thus requires 1/3 of a CD4049 package, three diodes, and two resistors.

If it desired to remember the button state during power down, the circuit can be backed up with a 3V lithium coin-cell isolated by two Schottky diodes.
The circuit draws only the IC leakage current when in the quiescent state, so the battery should last nearly as long as its shelf life.

The circuit should also operate okay with 74LS04 inverters (5V only) but the resistors must be reduced to 1kΩ, due to the input current required by that device.
That circuit will also require a small quiescent current for the IC, so cannot be as easily backed up with a small battery.