Overview History Discussion
This circuit is a design I worked on after three regulator failures I've had on my motorcycle over a period of a few years, likely due to excess heat dissipation (the regulator has a small heat sink and is mounted under a fairing, close to engine heat). The fourth regulator I recently purchased is a MOSFET design which is claimed to dissipate less heat and thus be more reliable than the old SCR based designs. This led me to do the paper design (below) on such a regulator to try and reduce heat dissipation to a practical minimum (which is perhaps similar to the MOSFET design I purchased, although there is no published information on that design).

Note that this design has only been simulated as shown, so it should be built only by someone who's reasonably familiar in building and testing analog circuits, with the caveat that it may require modification to work properly in a real world motorcycle environment.

Most modern motorcycle alternators are 3φ permanent magnet types which output a voltage proportional to rotor speed, with a maximum current as determined by the saturation of the magnetic circuit. Due to the permanent magnet, the alternator voltage is not controllable, so the regulation is typically done by brute-force, shunting the excess to ground. (Trying to restrict the current output by a series regulator would lead to high and possibly damaging output voltages from the alternator.)
This is not as bad as it sounds since the alternator current is inherently limited and thus the power dissipated is also limited, being mostly due to the limit current going through the alternator winding resistance and the resistance of the regulator shunt switch to ground. This is much less than the maximum power the alternator can deliver at its rated voltage and current.

Early solid-state regulators used an SCR on each winding output to shunt the excess current to ground. The problem is that SCR's have an ON voltage drop of near 2V and thus, for a typical maximum alternator current of perhaps 20 to 30A, 40 to 60 watts is being dissipated in the regulator (not including the rectifier losses) when the regulator is shunting current, leading to overheating and failure if the heatsink is not adequate (which appears to frequently be the case from the many posts of regulator failures on the web).

The circuit below minimizes the regulator losses by using low on-resistance MOSFETs to shunt the current, along with low forward-drop Schottky diodes for rectification of the positive half-cycle.
To further reduce losses, the MOSFETs do double-duty and act as synchronous rectifiers in the reverse (negative half-cycle) direction for even lower rectifier losses when they are not being used to shunt excess current.
The three diodes that typically do the negative rectification in an SCR design are thus not needed.

The synchronous rectification control is provided by comparators U2 through U4. They apply a plus voltage to the gates of the N-MOSFETs when the MOSFET drain voltage starts to go negative, which is an indication that the MOSFET parasitic/substrate diodes are beginning to conduct during the negative half of the alternator output for that phase. Since MOSFETs conduct equally well in both directions when ON, the voltage drop across the MOSFETs will be determined by their low on-resistance which gives a lower conducting voltage and thus lower power dissipation compared to a diode.
The positive half-cycle is rectified by the low forward-drop Schottky diodes D1 through D3. (Synchronous MOSFETS could also be used for that but it's not worth the added circuit complexity required to control the high-side MOSFETs just to save a few watts).

For voltage regulation, when the output voltage causes the voltage at U1's plus input to exceed the reference voltage (≈4.2V) at the negative input, U1's output will go high. This forces the outputs of U2 through U4 to also go high, turning on all the MOSFETs and shunting the alternator output current to ground. U1's output rapidly switches high and low to maintain the output voltage, with frequency and duty-cycle determined by the battery charge state, the alternator (engine) speed, the control hysteresis, and the system load current.
The values of the voltage divider resistors R3 and R4 are selected so that this switching occurs at an output voltage of a little over 14V, as desired to charge a 12V lead-acid battery.
U5 is a stable 2.5V voltage reference whose voltage does not significantly change due to ambient or circuit dissipation temperature changes, unlike zener diodes.
D6 through D8 provide temperature compensation of the charging voltage since lead-acid batteries have a negative voltage coefficient with temperature of about -3mv/°C per cell or -18mV/°C for a 12V battery. (This compensation is apparently not done for any of the commercial motorcycle regulators being sold but it should serve to prevent overcharging at high ambient temperatures and increase the life of the battery.)
The three diodes gives a variation of about -20mV/°C at the regulator output. The small increase over the ideal calculated value allows for slight heating of the battery over the ambient temperature.
Note that these diodes should be mounted in the ambient air flow where they will not be significantly affected by engine heat or self-heating of the regulator circuit.

The LTspice simulation below shows that the output is regulated at about 14.1V with a 190mV ripple (due mainly to the hysteresis value of U1's circuit).
The output voltage can be adjusted by changing the values of R3 and/or R4 and the ripple is adjusted by the value of the hysteresis resistor R5.
CBat simulates the battery and RLoad is a simulated load.

The diode and MOSFET listed at the bottom of the schematic are some I found at a reasonable price with isolated packages so they can be easily mounted on a common heat sink with no isolation hardware required. Of course these devices will need to be mounted on an adequate sink using thermal grease (something like a 3" x 5" finned aluminum heat-sink should be sufficient depending upon its location in the air stream and relative to engine heat) to keep the semiconductor junction temperatures below their maximums under worst-case power and ambient temperature conditions.
The heat-sink should be mounted away from engine heat and in the ambient air stream, if possible. 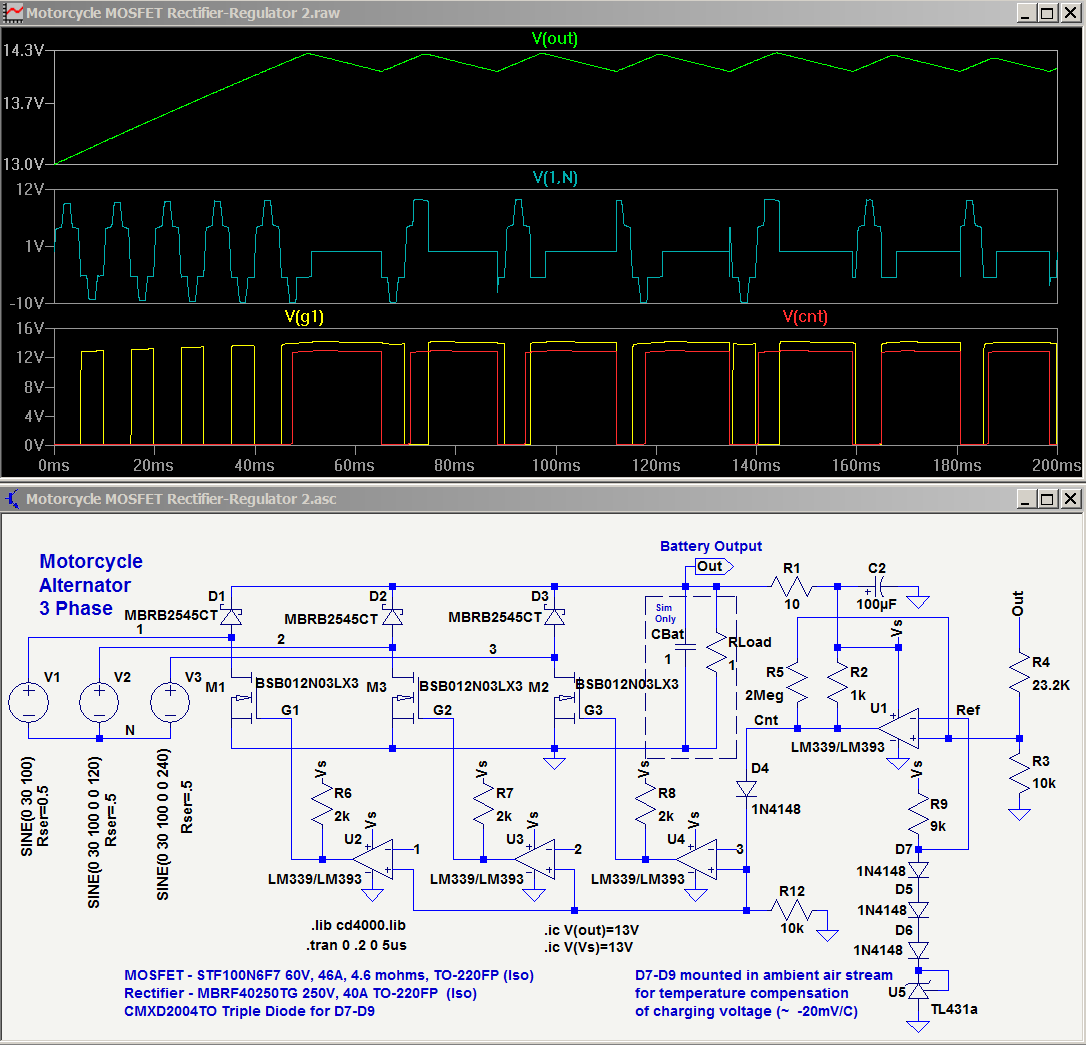