Overview Updates (1) History Discussion
For optimum charging of lead-acid batteries a 3-stage technique is typically used, consisting of an initial constant-current (CC) charge stage until the maximum charge voltage is reached, then a constant-voltage (CV) top-off stage at that voltage until the current drops to a low value, at which point it switches to a lower voltage CV float-charge stage.
This sequence is shown in the figure below from Batteryuniversity.com. 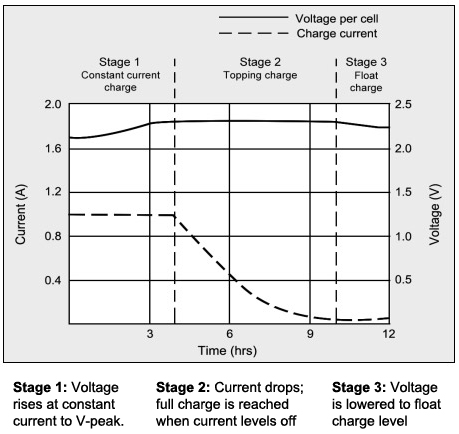 This article describes a simple SMPS circuit which performs that charging sequence using no microprocessor or specialized components.

Discussion--
For low battery charging currents a linear regulator works well, but for higher charge currents a switch-mode power supply (SMPS) is preferred for better efficiency and minimal heat sink requirements.
So discussed here is a simple switch-mode circuit that uses hysteretic (bang-bang) feedback to control the charging voltage and current.
A hysteretic design is inherently stable and thus requires no frequency compensation of the control loop as linear feedback loops do. This reduces the design complexity of the circuit, and eliminates possible instability problems when changing from the CC to the CV mode while charging the low and varying load impedance of a battery.
And since it uses current feedback in the control loop during the high-current CC charge, the converter also inherently prevents the inductor from saturating.
Hysteretic converters can have more output ripple and their switching frequency varies with load, but that's not normally a significant concern for battery charging.
The circuit efficiency is typical for a switcher at around 85% so will not generate much heat.

The circuit (below) uses one LM339 quad comparator chip to perform all the feedback and control functions, along with one CD4049 inverting buffer IC, one P-MOSFET, one Schottky diode, a TL431 reference, and several passive components.
It has LEDs to respectively indicate that power is applied, that the battery is charging, and that charging is complete.

During the initial CC charge, U1 rapidly switches P-MOSFET M1 in a PWM fashion to generate the desired output current, with inductor L1 smoothing the voltage pulses from the MOSFET and converting them to a current.

The U2, Tl431 voltage reference provides an accurate and stable 2.5V which is used to establish both the CC and CV values.
Its voltage is reduced to about 300mV at the U1(+) input for the CC reference, which is compared to the voltage generated across the current shunt resistor, R1.
When the peak battery charge current generates an R1 voltage exceeding U1's (+) reference voltage, U1 turns off M1.
This causes R7 to generate about 30mV of hysteresis voltage at U1's input, so M1 stays off until the battery current from the inductor has dropped about 20%, at which point U1 turns MI back on.
This is the hysteretic feedback sequence that rapidly repeats to control the battery charge current in the CC mode.

U4 through U9 are six CMOS inverters in a single IC package that are paralleled to act as a poor-man's gate driver for M1.

U10 detects the charge current and when it is above about 0.6A as determined by the Set2 voltage (≈40mV), its output is low.
This sets the maximum charge voltage at ≈14.4V.

Initially, U1 maintains a Stage 1 CC charge of ≈6A until the battery voltage reaches its maximum charge voltage of 14.4V.

At that point U10 takes over control of the input to the Driver PWM signal and maintains the charge voltage at that level for the Stage 2 top-off charge.
(U1 and U10's output can be connected together to perform a wired AND function since they have open-collector outputs).

After the battery reaches near full charge the current will start to drop.
When the current reaches about 0.6A, U11 detects this value and its output goes high (open).
This removes R9 from ground and changes the resistor divider ERR voltage at U10's (-) input, such that the battery has to drop to ≈13.6V before U10 again starts the charging current for the Stage 3 float charge.
This is the maintenance CV float-charge mode to help top off the battery and keep it charged.

The charger will revert to the Stage 1 high-voltage, CC charge rate if a battery is attached with a voltage of <13.6V that takes a charge current of >0.6A. 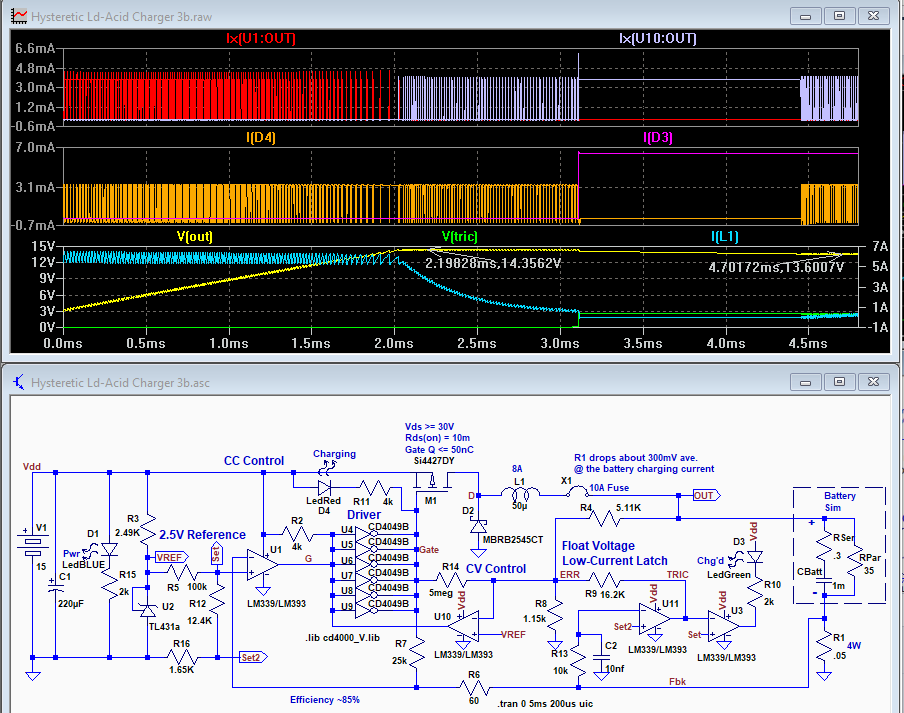 The initial Stage 1 charge current (blue trace), controlled by the switching of U1 (red trace), is ≈6A average until the output battery* voltage (yellow trace) rises to ≈14.4V.
At that point U10 starts switching (white trace) to maintain the Stage 2 voltage at that value.
The current now drops, causing U1's open-collector output to become continuously off, thus having no further effect on the PWM signal.

When the current drops to about 0.6A, U11 switches high (green trace), dropping the charge voltage set point to the Stage 3 value of ≈13.6V, which momentarily stops U10.
The charge-finished LED, D3, also lights at this point (purple trace)

After the battery voltage decays to 13.6V, U10 starts back up, generating the float-charge-current (with value determined by the battery characteristics).
R14 provides hysteresis for U10's oscillations during the Stage 3 float-charge.

LED D4 (orange trace) is lit by the PWM signal during the CC charge, the CV charge, and the trickle-charge.

*(The simulated battery consists of capacitor CBatt in series with Rser and parallel with RPar. The capacitor size is such that the simulated charge time is only a few milliseconds. The actual charge time will be much longer of course, typically hours, depending upon the battery size and state of charge.)

The charging current can be changed by using a different value for the shunt resistor, R1.
The 0.05Ω resistor dissipates about 1.8W total and can consist of two 0.1Ω, 2W resistors in parallel.

The inductor must be sized to handle the peak ripple current without saturating, which is about 7A in the simulation. One rated for at least 8A should be sufficient, such as the 10A Coiltronics CTX50-10-52.
Its inductance can be more than 50μH but should not be appreciably less.

The input voltage should be ≥15V with a maximum of about 25V.
This means a standard 12.6Vac output transformer into a full-wave bridge Schottky rectifier should work as a supply.
It does require sufficient filtering so that the low point on the ripple voltage is not much lower than 15V (at least 5mF of filter capacitance per amp of current for a 12.6V transformer).
Note that the transformer VA rating should be at least 50% (1.5) above the charger's VA maximum input of 14.4V * 6 *1/0.85 * 1.5 = 153VA for a 6A CC and 85% efficiency, to avoid overheating the transformer.

Another good supply (V1) for the circuit would be a 15V, >6A SMPS adapter, which are efficient and relatively low cost.

The circuit will not be damaged by application of the battery voltage if the input supply is off.
It could be damaged however, if the battery is reverse connected.
For protection a 10A breaker or fuse (X1) is in series with the output.
(D2 is rated for 25A and will carry the fault current until the fuse/breaker blows).

The M1 transistor can be just about any P-MOSFET that meets the parameters listed on the schematic. M1 dissipates about 1.6W so it may require a small heatsink, depending upon its package type and mounting.

Note that proper grounding and decoupling are very critical for this circuit due to the high current, fast rise-time signals and small control signals to the comparators (as low as 40mV). Building the circuit on a board with a ground plane is best. Otherwise use a single-point type ground with the common of R1 being that point.
Connect C1 from the source of M1 to this point, also D2's anode, and all the common points for the rest of the circuit.
Building this on a plug-in type breadboard will likely result in erratic and unsatisfactory operation of the circuit.

Ending Caveat: This circuit was designed and simulated but not built, so it is likely that the built circuit will not perform exactly as the simulation shows due to component tolerances, layout parasitics, etc., and may require some tweaking to obtain proper operation. So anyone building this circuit should be aware of that and have the ability to understand the circuit operation and make any required changes.
Reactions: Mick B