What kind of encoding is this pulse train?

I'm trying to figure out the remote code for this fireplace. It has a 315MHz transmitter. This is the pulse code sent to the data pin of the 315MHz radio transmitter module, not the radio signal out. 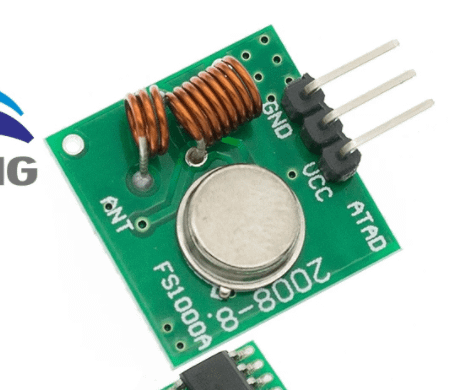 The signal consists of 4 bursts. This is the code it sends for "off". The smallest pulses are ~412 us long. So I take the baud rate to be about 2400. Each group contains about 67 positive pulses. There is no long reset pulse like you see on 1-wire. Each group starts with a long 3 count pulse of around 1220 us. Close up, the pulses are likely in the 3.3V standard. As you can see they are in multiples of ~410 us, Ideally I want to figure out the standard so I can capture the commands and send them from my own device so I can tie them into my home automation system.

(I am not sure that all 315MHz OOK-ASK transmitters play together, but that's another topic)

I figure this isn't dangerous (since in my web searches for an answer I see people getting that rebuke) I am not messing with the gas or ignition control. I am just sending it on, off, higher and lower signals. All the safety rated stuff is still in control of the flames and blower.

The fireplace maker sells a hub but it's $250. I figure I'll try and make my own. I was hoping I could capture and retransmit it simply by using an inverted UART (im working with an ESP32-WROOM, so it can set uart to inverted) but it looks like it'll be a little more complicated than that.

It's a proflame brand remote, kingsman is the model.

And info on this code, if it is a common standard, and how to capture or produce it from an arduino coded device would be great. I'm putting it on an ESP32. It looks a lot like the pulses I've seen on TV remotes and those cheap RC helicopters. But I don't know what it's called.

Supplimental; is there an existing arduino library to just capture and store pulse codes like this for playback? If I make a hub of my own I'd like to give it a "learn" capability. If not I suppose I can write one.
-Paul
P

Most Helpful Member
Most rf remotes use "Manchester encoding", Google that and see it it fits.

A search on those words should find other options.
Terry VK5TM
https://www.vk5tm.com/
You must log in or register to reply here.

B
What kind of modulation is used in this waveform?

Can anyone tell me what kind of pulse timing this Rutaba T6EX may have?

U
What is this antenna from?

what kinds of waves