Most Helpful Member
I pulled this from a dead piece of kit, I like the Vfd panel, I've driven these directly before but this is the first module I've had.
I expected it to have the usual 4/8 bit interface as found on a 2x16 lcd module, however this one is different, it has a 5 pin connector.
Would this be a I2C interface, or some weird protocol, the module is made by futaba.

I have driven a few modules like this, and most of the ones that I have seen with a serial interface use a standard 3-wire serial inteface (Data, Clock, Latch). You will probably need to look up the part number of the module or the controller on the board to determine the pinout.

The module looks to have a voltage converter on board, so it can probably be driven from +5V without a separate supply for the VFD plate voltage.

Most Helpful Member
I found a driver on arduino playground.
It says that the display is processor demanding and uses interrupts, not sure what they mean by that, hitachi lcd's just need to be written to and the data remains displayed, maybe these have some weird thing like only one character is displayed at a time or something.
Thanks.
Red to black, black to red and blue to bits.

I'm not sure if that is correct. The processor on the module itself should be handling all of the character multiplexing on the VFD tube. All you should have to do is send the serial data once and the characters should stored in the memory on the controller. Are you certain that the library you are referring to is specifically for a serial controlled VFD module like the one you have?

When I did this, I just bit-banged the data manually. This was all years ago, and I think I may have lost my original code some time ago, but I might still have a picture of my setup.

EDIT: I found the pictures! This was a random VFD display module that I scrapped out of an old printer. It had a small voltage converter on board, so I just fed it 5V power directly from my Arduino. As I said, I'm pretty sure I lost my code for this, but I'll check some of my backups to see if I can find it. 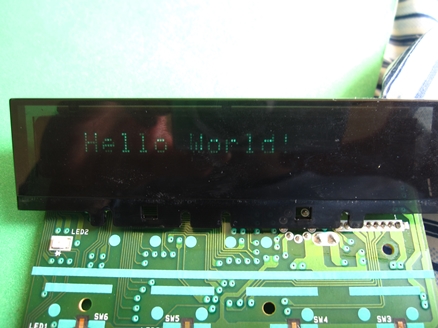 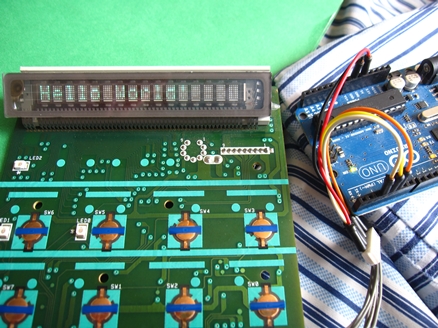 Most Helpful Member
I was going off this:
https://playground.arduino.cc/Main/PrimeVfd
Sounds like a proper odd ball thing.
But then I found this, and the pic is just like the one I have, apparently its a futaba US series:
https://playground.arduino.cc/Main/FutabaUsVfd
I remember using the plotter it came from, there is quite a bit of burn in on this one too, so if I could do a quick hello world with a 'duino I can work out whether to chuck it or not.

Hmm. well both of those libraries definitely seem to be for serial-controlled modules... I have no idea why the first one would need to be continuously writing to the VDF on an interrupt. In theory, there is very little difference between these VFD modules and their LCD counterparts, so I expect many of these libraries would be almost interchangeable.

I wasn't able to find my old code, but my notes from that time mention that the module I was driving used a Mitsubishi M66004 controller. If you can find a datasheet for the control chip on your module, that might give you a pinout and a place to start for the code.

On some VFD modules where there was a lot of burn in, I found that by illuminating all the characters at once (there is a full block character on most controllers I know), then leaving it on for a while helped reduce the burn in somewhat.

Most Helpful Member
Well I got it to work with the above, despite my efforts I couldnt get the pic onto my pc, but its n=bad, really bad, I htink this thing must have been left years switched on, even with the lights off its hard to read.
I'll try the all segments on thing and see if that improves it any.
Red to black, black to red and blue to bits.

dr pepper said:
Well I got it to work with the above, despite my efforts I couldnt get the pic onto my pc, but its n=bad, really bad, I htink this thing must have been left years switched on, even with the lights off its hard to read.
I'll try the all segments on thing and see if that improves it any.
Click to expand...

To be honest these displays seem really crap

There's been a LOT of them used in VCR's DVD Recorders etc. and they always seem to go really dim in a very short time.

There have been a few other problems, such as dried up capacitors - but those usually only make a small improvement, and it's the displays that are worn out.
PIC programmer software, and PIC Tutorials at:
http://www.winpicprog.co.uk

Most Helpful Member
This one was in a A0 plotter switched on in a print room from 1998 till thursday night when I went with my hammer and pulled it to bits so it has every right to be worn out.
They are after all a vacuum tube.
I have brought some life back to nixies by cycling them 0-9, so untill I try it I'm not going to bin it.
That said I cannot find the code for a solid block, the ascii code for it doesnt work, this module doesnt seem to understand extended ascii.
In the time I've had it switched on just cycling through characters it has improved, its spent most of its time showing the same text.
Red to black, black to red and blue to bits.

Reading through the datasheet for the M66004, the hex code it uses for a solid block is 0x7F, but I suspect different control chips will use different character tables, so you may just have to cycle through each character until you find one that works. Some controllers also allow you to program your own custom characters.

I once used one that had been on the front of a server, and had nothing but "OK" printed to it for probably 8-10 years non-stop. I was able to get it to a pretty usable state again by writing blocks to it, but the letters "OK" never fully went away.

Most Helpful Member
I'll try that when I get home.
As you can see the old thing is tired: 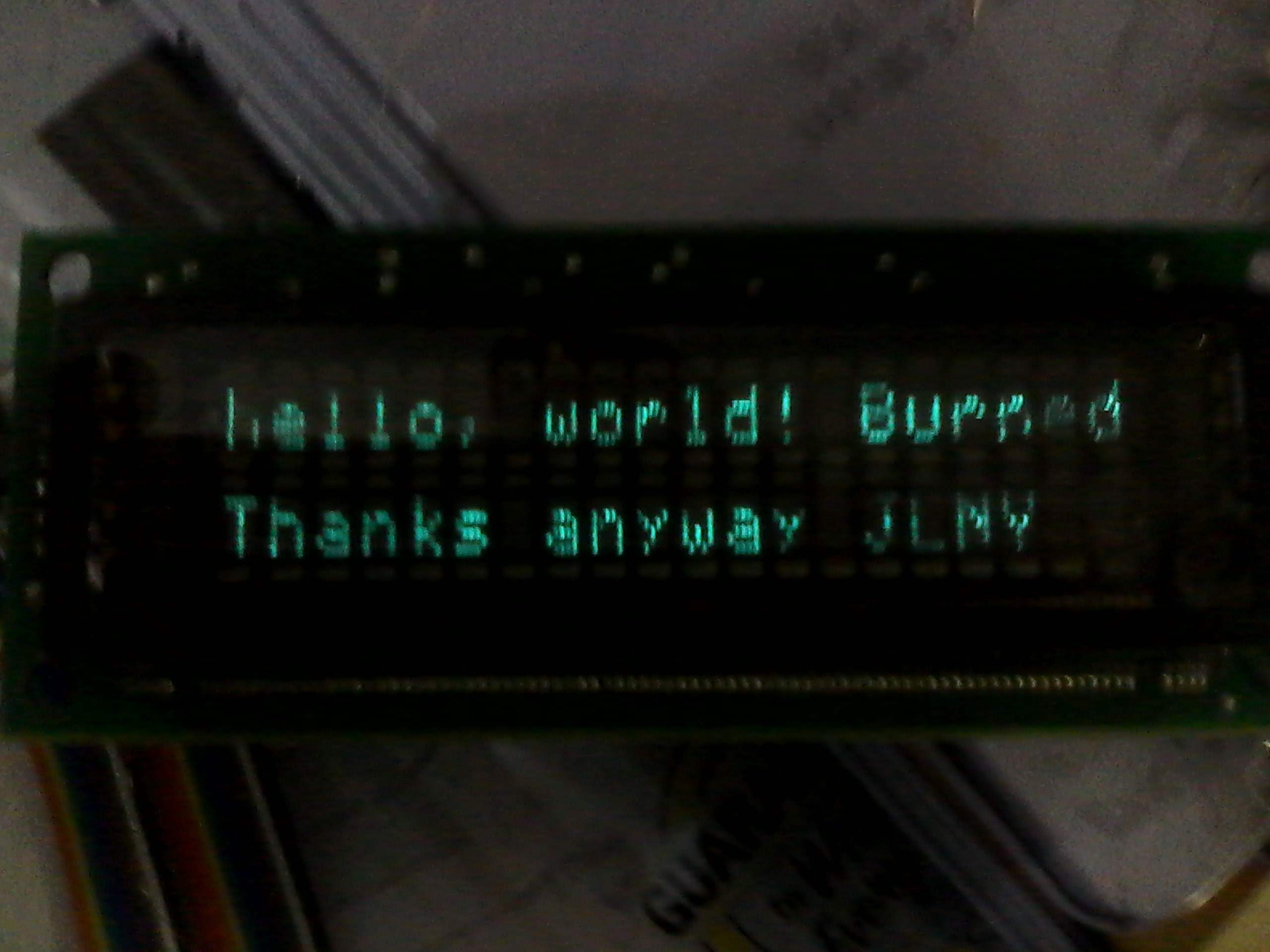