One would think that since I use to work at a company that developed CDMA phones that I would completely understand how it works. Well, I actually worked on the backhaul end. That is, after the call signal left the cell site and was just a digital serial bit stream.
With that said, I find myself trying to get a better understanding of CDMA modulation. So I whipped up a digital bitstream and phase modulated it with a baseband carrier of 4.95 MHz, I even made a 4 pole passive BPF for it.
So below is BPF response.

Okay not pretty, but that what I got with parts on hand.

Using my Arbitrary waveform generator set to PSK, and externally modulated with a serial bit stream, I get a waveform somewhat like I expected except I wonder, how on earth do you suppress the carrier wave out of the bandpass, or do you filter to one of the lobes. I dunno, I really have myself perplexed.
The spread spectrum waveform should resemble something like below image:

My resulting waveform is as shown below:

Zoomed in it looks right, but I am not showing the carrier wave.

I am sure my thinking is just goofy, but I think I need a good head slap to set me right. Thanks
I find that I am probably feeling bored if I am not feeling stupid. So revel in the ride! It means your learning something.
Dave Van Ess, The PSoC Guy

Nobody huh? I think I have a theory as to why the carrier is sticking out like a sore thumb, I think it has to do with my modulating source being non-synchronous with the carrier. This is just a theory mind you. The reason I think this is that I read something in the ARRL handbook saying the modulation source and carrier are synchronous in PSK modulation schemes, and this is just a form of PSK I think.
I find that I am probably feeling bored if I am not feeling stupid. So revel in the ride! It means your learning something.
Dave Van Ess, The PSoC Guy

Sorry, but I have no real knowledge of spread spectrum techniques.
Too many other things to play with!

Aren't you supposed to be using a balanced modulator? Its been over 20 years since I took Qualcomm training courses on their CDMA stuff, so can't remember the signal processing block diagram, but the result, at least in their old system should be a Bart's head. However, generic direct sequence spread spectrum (not "CDMA" specifically) looks a lot like what you got except for the carrier, as you say. I think your reference picture is showing something more specific than direct sequence spread spectrum and isn't the right thing to begin with. My vague recollection of "CDMA" brand signals is that there are some extra steps, like using a psuedo-random bit stream to do the spreading, some waveshaping before the RF modulator (which you haven't included) to make the PSK spectrum more square. I remember throwing out course notes many years ago. Too bad, could be useful now.
Last edited: Feb 12, 2017
RadioRon

Mike, after re-reading your post, I realized that you are generating a simple binary PSK output and so I reviewed some basic theory on PSK. The example spectrum plots that I saw looked like yours except for the carrier. Next, I tried to set up a similar experiment to yours using my ESG signal generator and internal phase modulator. Unfortunately, the internal modulation source is very limited, to something like 50KHz of square wave, so I couldn't mimic exactly what you set up. However, I did also see a prominent carrier poking up in the middle of the spectrum. Now, to be clear, I set up a binary PSK with phase shift of 180 degrees. It makes a difference exactly what the modulation parameters are. I'm still not clear on why the carrier is there.

After scanning a few tutorials, most of which are very simplified, the few that show spectrum don't have a prominent carrier. However, virtually all of them use ideal BPSK where the phase transitions occur only where the carrier is zero-crossing. In other words, they assume that the data bitstream is synchronized to the carrier. In our case, I don't think my generator is synchronizing.
RadioRon

Its also pretty clear that, in order to get the CDMA Bart's head spectrum or something like it, you need a pulse shaping filter to round out the digital bitstream before it enters the modulator. This means that in your bench setup, you need an analog phase modulator input to your ARB. Do you have such a thing?

One other thing I just came across is ...what levels are you supposed to present to your phase mod input? Is it 0V and 5V or is it +5 and -5V? The one text I'm reading here says "in practice BPSK is generated by applying cos(wt) as a carrier to the balanced modulator and the modulating input is +/- 1V". If I had to guess at the correct signal to apply to the DATA input on my generator it would be 0v and +5V and the generator would translate that to +/- voltage to apply to the internal balanced modulator, but that's just an assumption.

I opened the manual for my 33220A Arb function generator and in there I found that when you attach an external bitstream to the MOD IN port, you have to present it with +/- 5V. What function gen are you using?

It follows that if your modulation is not correctly balanced, you would get carrier.'

I reviewed this with a friend who has much better theoretical knowledge on such matters and he suggests that the carrier tells us that the phase modulator, which is invariably a balanced mixer is being fed an unbalanced bit stream, that is where the ones are x volts and where the zeros are not exactly -x volts, or in other words, there is DC offset in the system. Not sure how to translate that to your test setup, but it gives some clues. The idea that the mod and the carrier have to be synchronous does seem to line up with this because without synchronization, I would think that you definitely get an imbalance, but my friend said that would be only a small effect, implying it would not generate much carrier. But he may be thinking of a much bigger difference between bit rate and carrier frequency, like 1 Mbit modulated to 2 GHz carrier. In that case, there would be less of an effect i think.
Last edited: Feb 12, 2017
RadioRon

RadioRon said:
Aren't you supposed to be using a balanced modulator?
Click to expand...

Funny you should say that, and I came to that conclusion as well. I started thinking that in a DBL mixer that the carrier should be suppressed by its very nature, so as a test I decided to input my modulating signal and carrier into a Mini-ckts DBL mixer. In the image below you can see better carrier suppression. 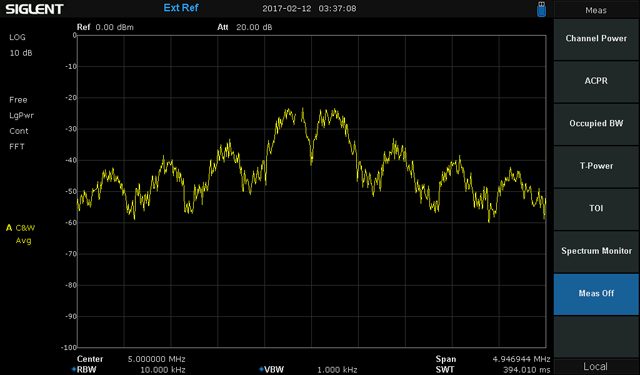 I find that I am probably feeling bored if I am not feeling stupid. So revel in the ride! It means your learning something.
Dave Van Ess, The PSoC Guy

Ron, your post is great and thank you. I will have to review some of what you mentioned, and when I have time I will test some of the things you mention.
I need to concentrate on getting my resume done as I am getting assistance from the VA (vetran administration) to get on my feet job wise as I have been with an illness for past few years and unable to work. I have an appointment on Tuesday and I need to bring a resume, so that needs to be my focus...
I find that I am probably feeling bored if I am not feeling stupid. So revel in the ride! It means your learning something.
Dave Van Ess, The PSoC Guy