Hi,
Please help with removing and replacing DPAK FETs from an FR4 PCB with much thermal copper on/in it?

So, Today I went for a practical interview for a soldering job. It was required to remove 5 DPAK FETs from a PCB , and then replace them with different DPAK FETs. (The PCB was a 100W, 36V battery charger SMPS. This PCB was in production, but the FETs were said to be counterfeit, and thus in need of replacement) I failed the assessment, and so didnt get the job.

I’ve now searched the web for “the way” to do this, but all the ways recommended wouldn’t have worked on this job.

The DPAK FETS were generally close together near the PCB perimeter. The PCB was double sided populated , so not generally conducive to placing on a hot plate…but the PCB area directly under the DPAK’s had no components , so therefore that “Bit” of the PCB could have been somehow placed on a “bit” of the edge of a hot plate. (however, no hot plate was available)

So, the PCB was……
8cm diameter round PCB,
It was 2mm thick and of FR4 (I did not have access to gerbers, schem or PCB layout files)
Each DPAK FET had many 0805 resistors and capacitors in the close vicinity…ie, only about 1mm away.

There must have been a lot of internal layer copper under the drain tab of each FET, since the 80W METCAL soldering iron was struggling to get enough heat into the DPAK tab. The tip was an approx. 1.5mm chisel tip of length ~1cm (there were no other tips available). Each DPAK drain pad had some 12 thermal vias in it.

I eventually managed to coax all the DPAK FETs off the PCB by using the metcal iron, and another soldering iron of 60W, in a kind of “chopsticks pincering” action….and using lots of solder to kind of help get heat into the drain tab and the gate and source legs. I was only allowed to use unleaded solder…..(99% Sn) Getting these 5 DPAKS off the PCB , without removing the surrounding 0805’s, took about 20 minutes.

There was a hot air gun available to me, but this only had one nozzle, and this nozzle was 3cm long and ~1.5mm in diameter…..it was totally inneffective, and could not get enough heat into any of the DPAKs, even on max temperature.

Anyway…now for getting the replacement DPAKs on to the PCB……

…I managed to do this……..getting perfectly good electrical connection of all drain’s sources and gates…..however, the only way I could do it was to initially put a large “blob” of (unleaded) solder onto the drain tab, and then kind of “splurge” the DPAK into this blob of solder..as follows….

…This resulted in DPAK FETs which were not flat to the board…in fact, there was a “sandwich” of solder of some 1mm between the DPAKs and the DPAK pad. Even though this would not snag the enclosure, the interviewer told me it was messy, and so he failed me.

How should I have done this work? What tools should I have used?
(I have searched google for “DPAK removal tools”, etc, but drew a blank)

Would removing the nozzle have been possible?
Everyone loves war kittens!
F

Thanks, good point, i never thought of that. I had always kind of considered that heat guns always needed to be used with nozzles?...but i dont know?

So I suppose another way to do this might be to put a thin fillet of solder on the DPAK drain pad, and then some flux, and then put the DPAK on the pads, and then heat blast the hell (with a heat gun with no nozzle) out of the DPAK body until you see it shift and settle onto the pad, which would be an indication that the solder had reflowed under the entire DPAK drain pad? ..also putting kapton tape over the surrounding 0805 components so they dont get blasted away by the "heat gun hurricane"?
Last edited: Jun 5, 2020

If those transistors were going to be thrown away anyhow, I'd cut the leads first (if allowed to!) and remove them separately. Then you can remove the body without it being anchored down. Sounds like an awful task anyway, you really needed an iron with a bigger tip, which doesn't seem very fair. I have a 100W iron that would have taken them straight off

Only other things I can suggest are keeping the iron tip really clean, using enough solder (as you did) and giving the iron time to get to it's maximum temperature before even touching the board. I'd use the heat gun to pre-heat the board, first from underneath, then on-top, then work on it with the iron immediately. Of course, you might have tried that, in which case, I'm all out of ideas!

Good luck with the job hunting anyway
When Departing, please leave This World as you would like to find it.

Most Helpful Member
As it happens, I did something similar last night...

It's a multitool (oscillating blade saw) control PCB, which has three DPAK FETs and originally no heatsink other than the small PCB copper.

This is the second repair; the first time, it was obvious that one of the FETs had never been soldered down properly and it had cooked itself, then the others overheated and failed.

This time all three overheated evenly - and fell off completely!

For the previous repair I just used a normal iron set to maximum heat, tinned everything first and reflowed one at a time, as you describe.
[Edit - reading your post again, I cleaned the excess solder off with a solder sucker & wick before re-soldering them, though, and just added enough extra while everything was hot to give a visible flow around the device].

This time I coated the board with flux gel, arranged it dead flat with space below, put the new FETs in place and reflowed it with a hot air tool (a cheap thing I got off ebay some time ago, but it works very well).
First heating at a distance from below to get everything reasonably hot, then concentrating on the FET area from above until the solder under all of the FETs visibly flowed and they pulled down to the PCB.

(And this time I added a bit of folded copper to the back as an extra heatsink).

You can see it is a tiny board, but even with a hot air tool that has a nozzle about 10mm or so diameter, nothing else melted.

I'm glad you asked this question - from the photos, I can now see there is a bad joint on the motor wire connection next to the FETs. That's not going to help with thermal problems!

Do you think this is good enough for this job? (hot-airing the DPAKs back on the board)

Also, please can you recommend a head/nozzle for it that would be suitable (or a range of possibles?)
F

Thanks
This video makes soldering a DPAK on look so easy. They just use a soldering iron alone…


However, at 00:26 they swab the DPAK with what looks like a cotton wool bud, which cant be good from an ESD viewpoint?

At 00:39 they use “AIM no-clan gel flux” on the pad, but no solder tinning of the pad whatsoever…(why no solder fillet placed on the drain pad?)

Can any "no clean gel flux" be used here?

At 01:30, they solder the DPAK drain from the end of the tab only, but the solder appears to wet all round the side of the DPAK.
Do you know what power of soldering iron woudl be preferred here?
It makes you wonder how the solder managed to flow under the DPAK?

I wonder if pre-tinning the pads with solder paste would be best?..then the DPAK could be pressed into the paste?
Last edited: Jun 8, 2020

Most Helpful Member
That board looks to have no significant copper planes, it should flow very easily with just an iron; very different to a board with full copper both sides.

I use one of these for hot air work: 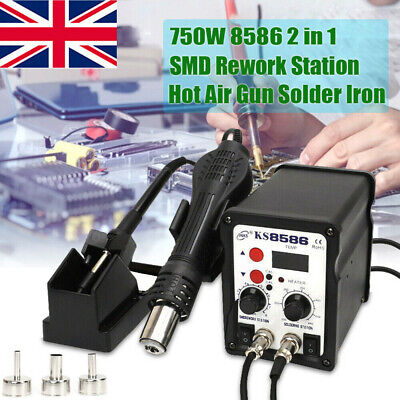 I've never yet used the soldering iron, but the hot air side works brilliantly, very controllable for both heat and airflow. Turn it right down (100') and it's good for warming phones & tablets for screen removal too!

I also use this Amtech flux gel:

AMTECH NC-559-V2-TF is a no-clean tacky solder flux for leaded (Sn/Pb) applications. NC-559 is a very successful formula with many devoted consumers worldwide, a golden standard for no-clean leaded…

Hi,
The manager of this company has now emailed me to say he has bought a "new Pace re-work unit, expensive but it should make life easier as it sucks up the solder at the same time as melting it."

..Can you think what this means?

Ive never heard of a rework station which sucks up solder...surely this wouldnt be wanted?

Most Helpful Member
there's a product known as "Chip Kwik" that is a very low melting point solder. what you do is apply the flux that comes with chip kwik to the solder connections and mix it with the original solder. then using lower heat, you can remove the device without damaging the PCB. then you wick (or suck) off the leftover chip kwik and solder mixture again at low temperature). you can then prep the board with fresh solder and install the new part.
.....................................................................................................
E=mc² (+/-1dB)
"If a curl of smoke is seen, the technician will soon experience the cause of difficulty"........ CTX arcade game monitor service manual 1985
DC-to-Daylight Blog (on this forum):
http://www.electro-tech-online.com/blogs/unclejed613/
Vintage Audio and Pro-Audio Repair, ampz(nospam-removethis)@sohonet.net
fight spam: http://www.robietherobot.com/spamfight.htm
http://www.spamhelp.org/harvesterkiller/
You must log in or register to reply here.
Share:
Facebook Twitter WhatsApp Email Link

S
How To Repair Ripped Copper Trace & Pad On This PCB..?

U
I Need a Magic Copper Pen?