Resistance of this resistor?

I need to determine the resistance of this resistor but coloured bands don't seem to agree with any color chart I've seen. Is this a 7ohm resistor? 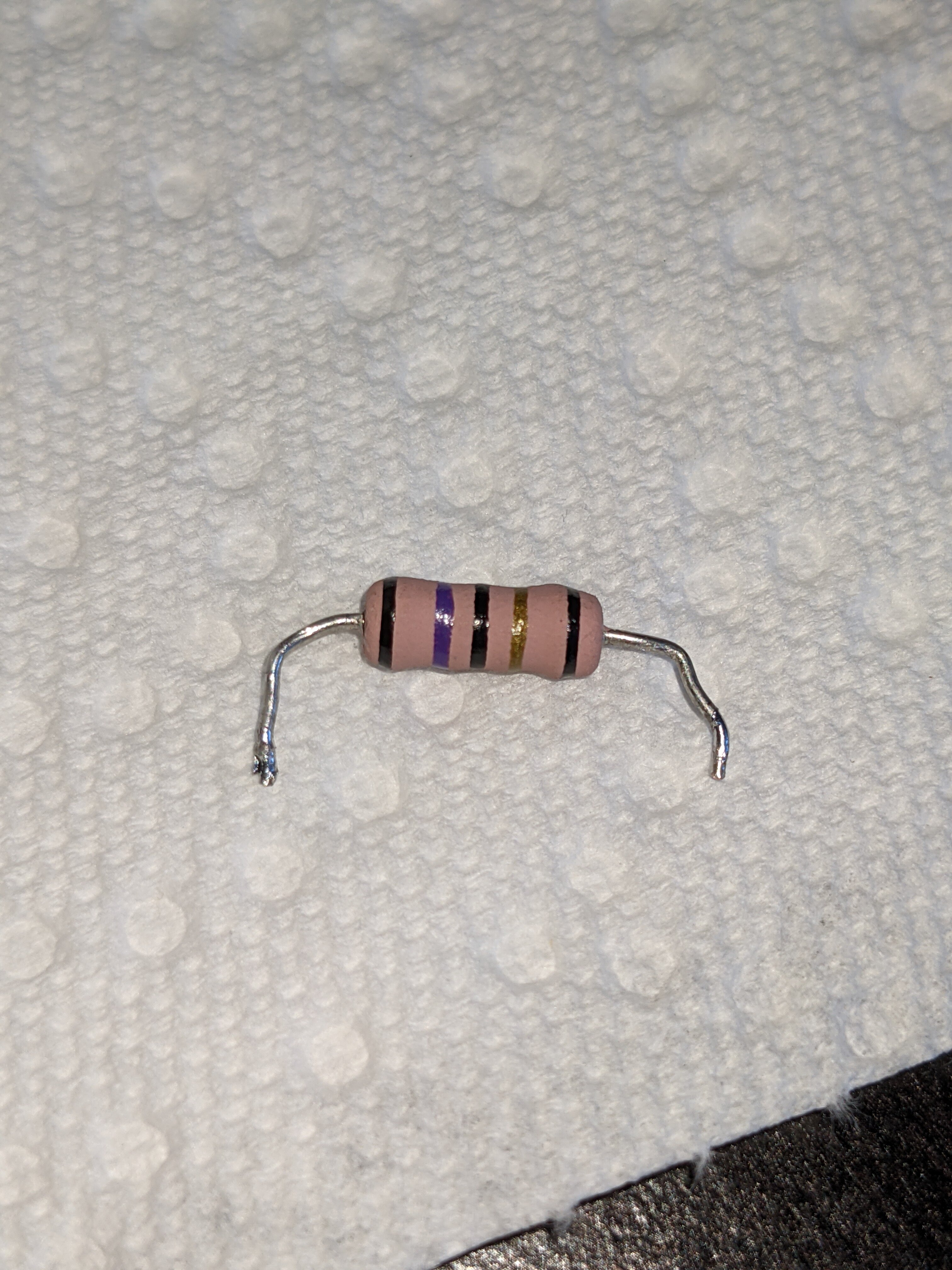 Most Helpful Member
I think the resistor has been very hot and this has caused the colours to change.

Do you have a means of actually measuring the resistance?

Most Helpful Member
At a guess, it may have started out at 2.7 or 4.7 Ohms before burning up..
S

Measures .1 to .2 ohms...some others have suggested that it may actually be an inductor...but it is labelled a resistor on PCB ( from a Samsung led SMPS)

Most Helpful Member
According to this chart, black, blue, black, gold, black = 0.6 Ohms with 5% tolerance and temp coefficient N/A.
My circuit designs should be regarded as experimental. Although they work in simulation, their component values may need altering or additional components may be necessary when the circuits are built. Due safety precautions should be taken with any circuit involving mains voltage or electrostatic-sensitive components.
Alec's First Law:-
Every problem has a solution (given the right information and resources).
S

Thanks... it's definitely violet though...not blue...from other comments I'm unsure as to whether or not it is a resistor...some say it may be an inductor...for resistor, tolerance is usually the last color and black is not one of the colors for tolerance?
P

Most Helpful Member
The two extra black bands - both spaced away from the central 3 bands - are confusing. If it didn't have the left black band, I'd read it as 7, 0, 1/10th so 70/10 = 7Ω. I suspect it's overheated and changed colours but that doesn't explain the two outer black bands.

For reference, pic is a 220mΩ 0.25W fusible resistor and yes that is milli Ω

Most Helpful Member
Terry, how do you identify a fusible resistor? And, what do the bands stand for?

Thanks for the replies guys...I think you're right that it is a fuse resistor but I still can't make sense of the black bands on either side... don't think there has been any change in color.
A

Pommie said:
Terry, how do you identify a fusible resistor? And, what do the bands stand for?

Used them a lot in years gone by - also the black band on the right side in OP's pic indicates it as a fusible resistor.

Looked for a chart to post re the colour code for fusible resistors, but appears not to be one readily available that I could find, anyway, first colour band is black indicating it is a less then 1Ω (black = 0 so 0.xx), second band (appears violet) = 7, third band black = 0 so reads as 0.70Ω then gold = 5% tolerance.

I should add there are variations to the 'last band black indicates a fusible resistor" thing as the other pic I posted shows a yellow band which is Tempco - it will depend on the manufacturer but the manufacturers datasheet will normally tell you what is going on.
Terry VK5TM
https://www.vk5tm.com/
S

Hey thanks for the info...the only fusible resistor chart I could find had an outer white band to indicate that it was a fuse resistor.
I seem to be getting .07 ish ohms with a MESR-100 (just arrived in the mail...think I'm using it right?)
Soooo... I'm off by a factor of 10 or it's bad???
P

augustinetez said:
Used them a lot in years gone by - also the black band on the right side in OP's pic indicates it as a fusible resistor.

Looked for a chart to post re the colour code for fusible resistors, but appears not to be one readily available that I could find, anyway, first colour band is black indicating it is a less then 1Ω (black = 0 so 0.xx), second band (appears violet) = 7, third band black = 0 so reads as 0.70Ω then gold = 5% tolerance.

Thanks Terry, learned something new today. Could the OP's reading of 007Ω (a factor of 10) indicate that the gold band is a 1/10th divisor?

Ya... that's what I'm thinking...maybe the last black is a manufacturer's tolerance rating of some sort or there is none and it just indicates that it is a fusible resistor.
Think I'll assume it's good and put it back on the board and continue troubleshooting.
Original issue is that SMPS for led tv has output for both the main board and the lighting that are only about 40% of what they should be.(4.9 vs 13 for main board and 95 ish vs 300 ish for led lighting)
A

You're highly unlikely to get an accurate measurement on anything that doesn't use a 4 wire measurement system - so I don't think that result is correct - however see further below.

2 wire meter probes/leads will never zero out completely because of lead resistance and the effects of micro contaminants on the probe tips and here you are trying to measure minuscule resistance values.

Possible, but I haven't seen the use of that sort of multiplier in sub 1Ω fusible resistors and a quick search of fusible resistor manufacturers doesn't show any values that low Lowest I could find was 120 mΩ
Terry VK5TM
https://www.vk5tm.com/

Seems to me that the resistor is unlikely to have failed low-value, whatever it started off as - so it's likely ok. However, I have seen current sense resistors (in the tens of mOhm range) go slightly high in SMPS applications due to prolonged overdrive, resulting in premature current limit and voltage sagging under load. It's possible that something like this could be occurring here.
"Don't Fear the Repair."
S

Thanks for the input... hopefully it is still good because at this point I'm unsure as to what it is and have no idea what it would need to be replaced with.
I pretty much need a schematic or a Samsung tech to confirm what it is.
Been too busy lately to continue troubleshooting the SMPS.
I'm VERY green at electronics but because the measured Volts is 5 but should be 13 I'm thinking that there is an 8 v or two 4 v windings off of the transformer from the hot to cold side that aren't working for one reason or another?
A

Can you post a pic of the power supply?

Ya... faulty caps was about the extent of my electronics knowledge before I ran into this thing...no obvious signs although the main cap measures a little low.
The ps is a bn44-00787a from a 58" Samsung led tv ...bout 2014. 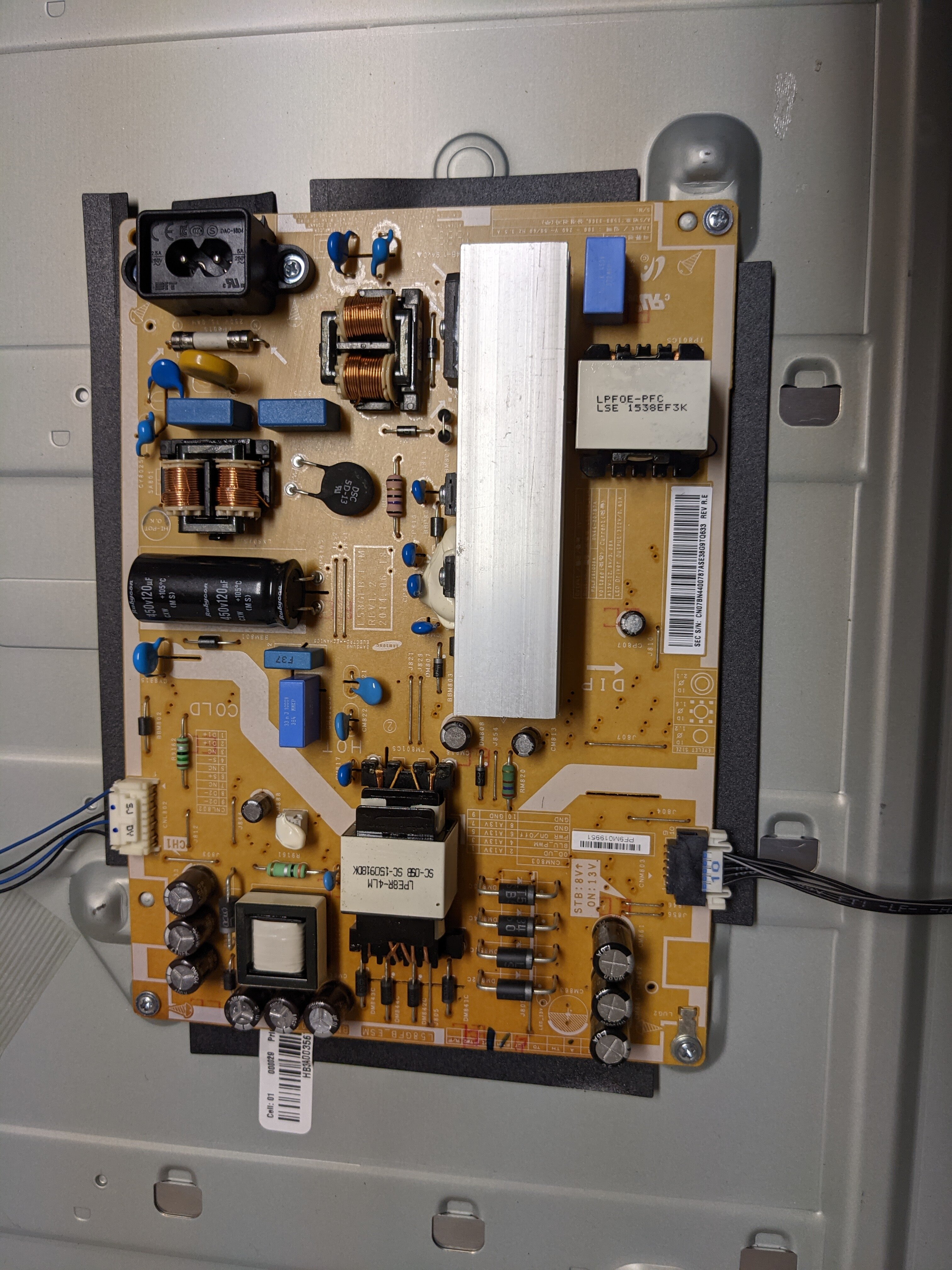 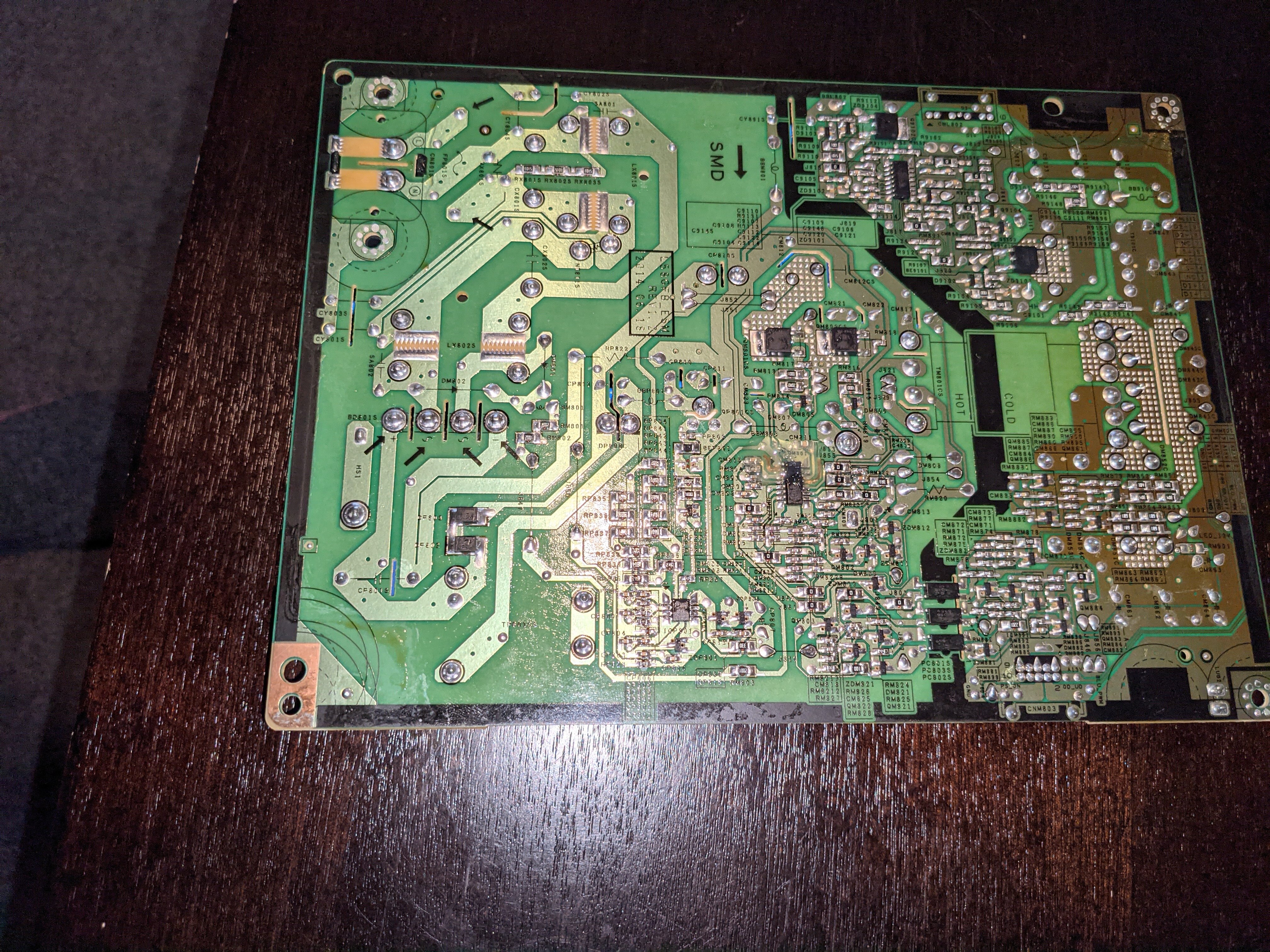 The issue is that the power output for main board is 5v but should be 13v and the output for the led lights is about 95 but should about 280 I think. I've replaced the ps with a VERY cheap looking replacement from Ali express and tv is working fine for now but don't expect the new ps to last so I'm trying to solve the old one before the replacement craps out...and I'm just curious as to what went bad on it... apparently it went bad after a lightening strike and then tv was given to me.
Last edited: Today at 1:27 AM
You must log in or register to reply here.

Confused about function of resistor in this circuit....

E
Need help finding the value of this resistor

S
Total Resistance in this Circuit