Sadly, it's the same I put at the beginning, and on Proteus it doesn't work... :-(
That's the reason I need to know what the hell are the Proteus PROSPICE commands...
To me this one gives no errors, but simply doesn't transfer the command to the output,
as I told it's likely a different sintax of parameters for the behavioural generators.
Syntax errors where on other simulators the models run quietly.
Last edited: Jan 21, 2023

a_leo said:
I meant reverting a model subcircuit into hierarchical schematic, to see how it's made
Click to expand...

The process for going from a hierarchical schematic is to ask for a netlist of the schematic, copy that to a text editor and add the .subckt and .ends statements. At least that is the way I have always done it.

ETA: sorry I read your question wrong. there is a standalone utility that will read a sub circuit an make a sort of a schematic. By that I mean it puts each component on a sheet and labels each and every net. In theory you manually connect all the nets and rearrange the components. It is called: Schbuilder.exe and here is an example of the output.
NB. It seems to have trouble with Unicode characters which LTspice make extensive use of. 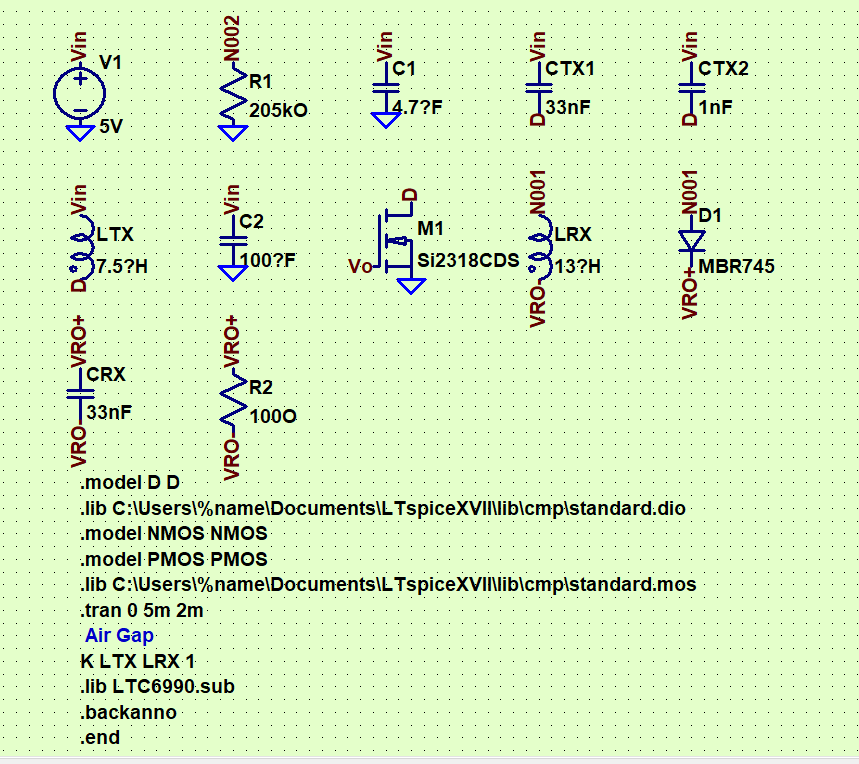 Which I was then able to turn into this

Ok, but how about starting from subckt and ending with the hierarchical schematic?
that is "ripping out" the subcircuit?
A

Let's take for example the 6N137.
Say I have two models, one from the Proteus internal library and one you gave me.
Is there any operation that allows me to see the "internals" hierarchical construction
of the two models so that I can understand and compare the way they work?

a_leo said:
Ok, but how about starting from subckt and ending with the hierarchical schematic?
that is "ripping out" the subcircuit?
Click to expand...

Sorry for the delay, but that is what SchBuilder is supposed to do. See ETA from previous post for an example of the output.
Last edited: Yesterday at 4:11 PM
We never have time to do it right; but we always have time to do it over.
A

A lot of thanks, Papabravo, maybe this is my ace!
Yes, I see that we have had a "timewindow conflict"!
Now I look for SchBuilder, crunch it a little and then report.
Kind regards
E

a_leo said:
Hi all,
It's already more than one month I'm struggling to have models for optocouplers VO2630 and HCPL-2430 working on Proteus 8.13. Following the examples in the Proteus help, in the past I successfully realized various models for transistors and components I needed, though my knowledge about SPICE itself is very poor. This time, despite I searched all over the web, finding some 10 different though related models for the VO2630, I wasn't able to have any working, and different errors for each of them.
I also tried to get rid of this starting with a simpler 6N137, that is the half model of VO2630 and also present in the Proteus library, hoping to understand by comparing the existent(and working) model with a downloaded one. No way. I then tried to plainly study the SPICE3F5 which is addressed as compatible to Proteus, bu I found again sintax errors due to different sintax styles.
The main problem is that I never was able to find a complete and organic list of all the Proteus SPICE commands, while that can be found for, say, Orcad. So, my first request is where I can find such a list, without it I cannot go far.
The SPICE examples given in the Proteus help are very limited and too few, for example I wasn't able to find an example for the simulation and installation of a digital part, the only label used is analog,subckt, trying digital,subckt gives an error. Then there are problems with the digital supplies: some explicitly use DPWR,DGND and I don't know how to translate it into Proteus. Not to speak about behavioural sources, that seem to have quite different sintax, and are very likely the true error cause. So I'm quite stumbling around in the dark of my unwanted ignorance. Instead of adding here some of the lots of wrong things I tried, I prefer to focalize on two model files I found on the web, hoping someone can tell me how to successfully modify and install them. Please note that to be allowed to upload the VSH_OPTO_10M file I had to change its extension from .lib to .txt, that wouldn't give any problem.
While making the device, for HCPL-2430 I have set pins A1,A2,C1,C2 as Passive; GND,VCC as Power; VO1,VO2 as Output.
Then I chose SOIC254P1030X508-8, DIL08 for PACKAGE; PRIMITIVE ANALOG,SUBCKT; SPICEFILE BrcmHCPL2430_MOD.txt;
SPICEMODEL HCPL-2430; SPICEPINS A1,C1,C2,A2,GND,VO2,VO1,VCC.
For VO2630, I set all pins as passive, except for VCC and GND, as it has open drain outputs, but am not sure it's right, because looking to the 6N137 already present in library, it has the output declared as output instead, and it's working fine. The other fields are as follows: PACKAGE SOIC254P1030X508-8, DIP762W50P254L977H451Q8; PRIMITIVE analogue,subckt; SPICEFILE VSH_OPTO_10M.LIB; SPICEMODEL VO2630; SPICEPINS A1,C1,C2,A2,GND,VO2,VO1,VCC.
To test them I used for both the same circuit shown below. The HCPL-2430 doesn't give errors on simulation, but while the LEDs give reasonable voltage and current when switched on, both outputs remain to the same voltage,around 2.26V if left open, very close to zero if connected to GND via a 1k resistor. That makes me think there is no proper value or some open connection around the behavioural block, but I'm not so skilled to fix it.
Things go worse when testing the VO2630: the simulation crashes at start, giving the errors:
SUBCKT '' used in ':U1:U11' but not found.
SUBCKT '' used in ':U1:U12' but not found.
Failed to expand subcircuits.
Simulation FAILED due to fatal simulator errors.
For what I have understood, there are errors in the AND subcircuit, just as a subcircuit lacked its name. Then I see names like $G_DPWR $G_DGND that I suspect are reserved and unsupported by the Proteus version.
Could I run this simulation step by step, I could better see when and why it crashes, but I'm not aware of such a function, neither in Proteus, nor elsewhere.
Kind regards
Click to expand...

I know its been a while, but I've managed to complete a hierarchical model for a VO2630. The pspice model you provided is incompatible with spice3, so I had to make a model from scratch using the pspice model and datasheet as a guide. Perhaps you can use my model a guide for making a model for the HPCL-2430. 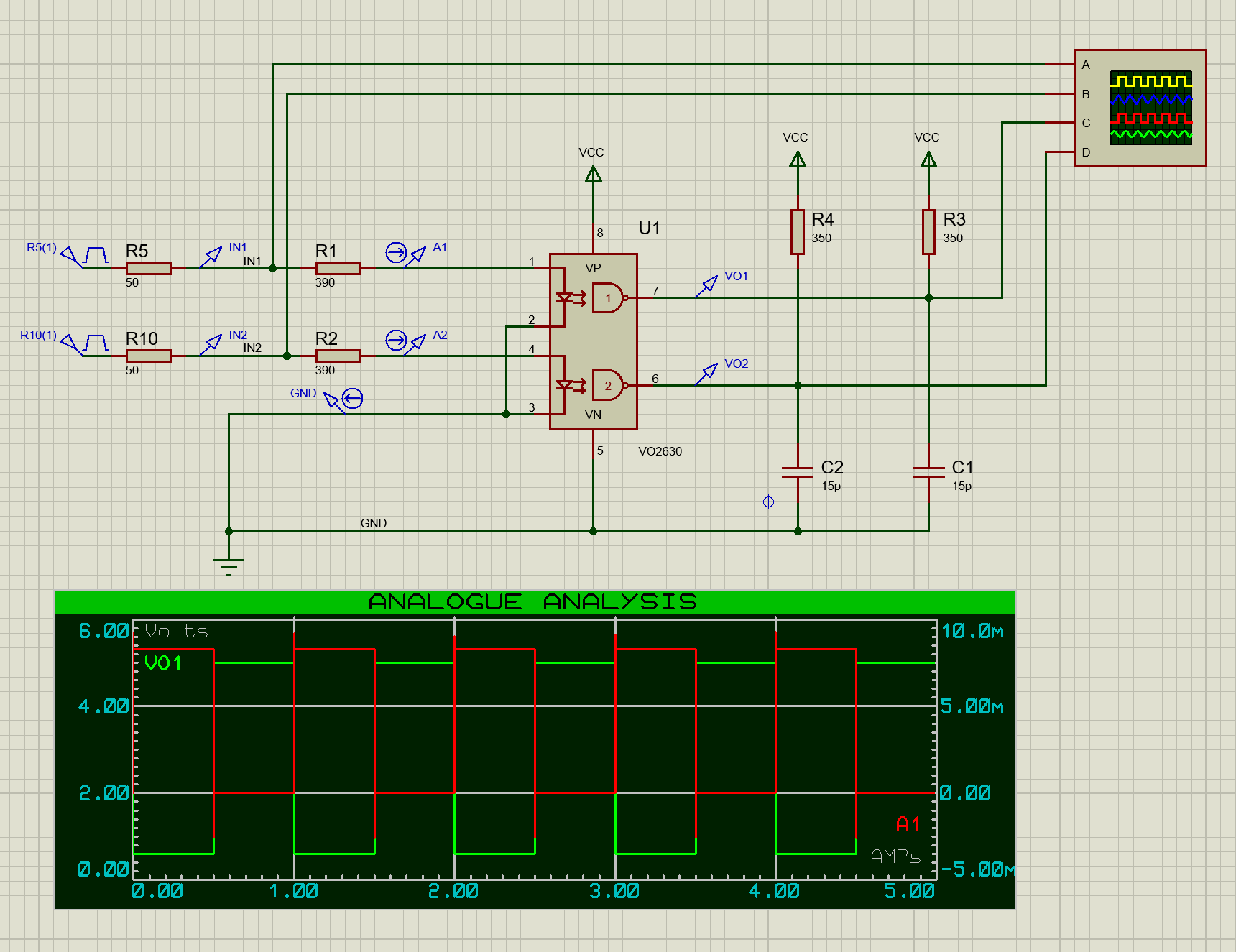 I've attached the file below.

You must log in or register to reply here.

O
how to diode spice model in proteus