Well, here's my situation. Small hobby project that has found varying frequencies of noise winding it's way into the Micro's ADC. Sweet, looks like I've done a "fantastic" job at keeping everything clean

Overall, I have a sensitive circuit feeding the ADC to a microcontroller. The micro also uses an LED matrix display through a driver....a very noisy LED display driver as I've now found, the Holtek HT16K33. Power is supplied to everything in a "star" route from 3 AAAs, but it looks like I'll need to go further that just that.

Checking my "4.5v" (note the quotes) I get this stuff the whole way across, regardless of where I probe on my rail. 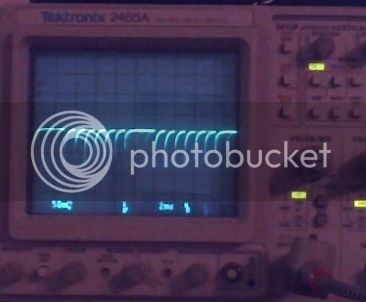 Low and behold, the frequency of that stuff seems to line up to a T to the settings I have put the display driver in, matching the refresh and duty rate described in the datasheet. I am fairly positive I've done a wonderful job of overlooking the ESR of those AAAs, but I could be wrong.

Taking a 100uF electrolytic cap and tagging it...anywhere on that rail (to gnd), I get a reduction of that peak by ~15mV. Cool to see an effect, but far lower than I was hoping for.

Further investigation, ditching the batteries and powering the thing from an LM7805 across ~1ft of 20AWG wire, the result looks about the same as above. However, bread-boarding one, and tagging the circuit's power rail less than 2 inches from the LM7805 regulator (with same wire gauge), I get this fantastic result below.

(apologies for the quality, only soo many hands when snapping the pic)

Anyways, I am looking for opinion, or bits of advice of what I could try to keep that noise away from sensitive stuff on my circuit. I have a 100uF electrolytic at the center of the star, and 10uf, 1uF, and 0.1uF of ceramic bypass right next to the Holtek IC. Looking at adding a decoupling circuit (inductor/cap) to the feed of the Holtek IC, or....would it be better to put one on the power input of my sensitive stuff...or both? If I can't get away with just passives, I'm looking at adding a switching regulator, feeding a linear regulator. I would prefer to avoid it if possible, but I know that could mean adding an absurd amount of bypass?

As stated, just looking for any opinions, suggestions, tips, etc.

Thanks in advance for the input!

Care to put your location on your user page next to 'Location'. That way your location will display in the window at the left of your posts.

You asked for suggestions to reduce the noise of your circuit. Well, there are many things you can do to improve the performance:

(1) Isolate the noisy part of the circuit from the sensitive parts.
(2) Decouple with low frequency capacitors (electrolytics) in parallel with high frequency capacitors (disk ceramic), or decouple with one capacitor that covers a wide frequency (22uF ceramic for example). Don't use surface mount ceramics though.
(3) It is good that you have a star arrangement but the layout design of a circuit is quite complex and critical:
(4) In general, there are three types of unwanted signal coupling in a circuit and there are measures you can take to limit all three:
(4.1) Conducted
(4.2) Capacitive (electrostatic)
(4.3) Inductive (electromagnetic)

As a general guide line, avoid any switching circuits if possible, especially switch mode power supplies (SMPS).
Keep the layout compact and wires as short as possible, but physically separate noisy and sensitive circuits.
In general, a breadboard is not suitable for critical circuits: low noise, high frequency, precision.

You could consider having separate linear regulators for the noisy and sensitive functions.

There is just one last point: what you see on a scope trace is not necessarily absolutely accurate because the scope itself, especially the scope leads, can pick up noise.

If you would like to post a schematic of your system and a picture of the layout we could probably advise further.

Shunting lower C values in parallel like 10uF//1uF/0.1uF reduces the ESR and the discharge time of each reduces and rounds out the peak dip in voltage.

This explains what you saw.

Now your choice is to reduce ESR or current drive of voltage source and choose lower ESR caps.

The bandwidth on regulators must exceed the rise time of step load, so caps are still a critical solution and adding chokes in series to the caps reduces the ripple current to the supply.

At some point with motor drivers, ripple current in the caps must be limited and often plastic caps are added.

Linear LDO's have lower ESR than SMPS but less efficient. The spec to look for is ".load regulation or Vo drop at rated current. Then choose the lowest independant regulated supply or rechargeable battery voltage that satisfies all your ESR drops.

edit
On EMI your interference here is all conducted noise but on ADC high impedance inputs you will have PSRR rejection and radiated current and voltage coupling.

Thus use twist pairs , pref shielded for inputs with high CMRR amplifiers and use CM choke or balun if necessary. In some cases, active guard shields using the CM voltage from one Op Amp to drive the shield is useful for uV level protection and capacitance reduction.

Trace your load ground currents and use heavy flat braid or wide strips of copper for low inductance and ensure these do not share analog current paths to your analog supply voltage and Vref.

For EMI control, every layout is different and consider your probe tip grounded as a current loop antenna and consider , isolation, shielding, or filtering at source or destination or both as required.
Last edited: Aug 22, 2016

Most Helpful Member
Without a schematic or block diagram it's hard to say, but ... if you monitor the power rail to the micro with the A/D in it, and disconnect power from the Holtec, does the micro's power rail quiet down?

You can try isolating the micro from the noisy power supply by:
The RC filter to the microcontroller will reduce the noise caused by the LED driver. Make sure you calculate the VCC rise time as this can cause issues for some microcontrollers (i.e. if rise time is too slow). e.g. you could try a 10R resistor and 47uF capacitor
https://sites.google.com/site/pk2devicefileeditor/

Thank-you all for the help/tips!

A few things have come up, but as soon as I can sit down and work on this a little more, I'll post my findings!

Most Helpful Member
The uC should work off a stable,ultralow LDO such that your LED load will not affect it for the ADC to be clean
The input cap of the LDO needs to be low ESR to assist the regulator to achieve good noise rejection. The LM7805 can have an output ESR as high as 0.1 OHas. Impedance ratio with the load determines the drop. If it recovers quickly then it is the caps and.or ground inductance.

Since you are experimenting at the moment, could you use a separate battery for the display+driver, and one for the sensitive stuff? It should at least give you some more clues as to the stray signal path, ie whether it is actually going back though V+, or some other route.
When Departing, please leave This World as you would like to find it.